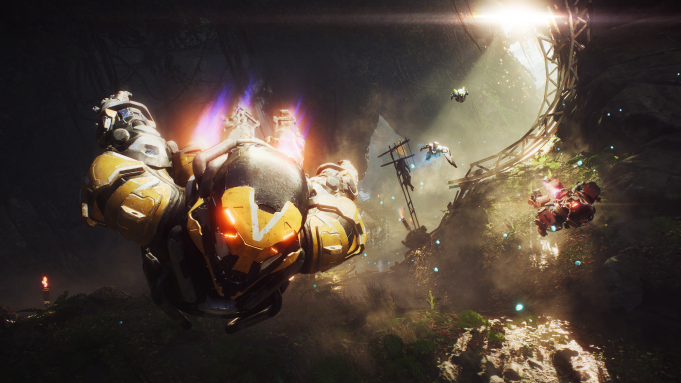 The world of “Anthem” will be plagued by “violent storms” and “mutated creatures,” BioWare teased on Saturday. The developer gave players new story details and a closer look at the game’s world with pre-recorded gameplay footage shown at EA Play.

BioWare general manager Casey Hudson explained that the game is neither an MMO nor a multiplayer game with bits of lore “bolted on,” but rather a shared world intended to facilitate the kinds of narrative-rich experiences BioWare’s past successes are known for.

“A great story, for BioWare, is about characters you can have a connection with, [and] choices that you make,” said executive producer Mark Darrah. And that story will be told through live content updates. “We’re also designing [the game] so that we can add story for years to come,” lead writer Cathleen Rootsaert added. While the game world is meant, narratively speaking, to be an ever-changing landscape, the safe haven of Fort Tarsis will represent “Anthem’s” sense of “consequence and change,” Darrah clarified in a tweet. Returning to Tarsis will be a single-player experience, but your friends can accompany you when it’s time to battle it out in the wilds beyond the wall.

Players, or “freelancers,” will choose from four different Javelin classes that grant unique abilities and skill sets: the Ranger, the Colossus, the Interceptor, and the Storm. Following Saturday’s press conference, Darrah explained in another tweet that freelancers aren’t bound to a single class forever; players will be able to swap Javelins. In other words, “No need for multiple profiles.”

The game’s main story will also feature key non-player characters for players to interact with. No PvP modes will be included at the time of release.

“Anthem” is a post-apocalyptic sci-fi shooter in which player characters wear “Javelin exosuits,” delve into strange ruins, and battle various creatures and marauder factions to save humanity from extinction. The new intellectual property was first announced at E3 2017. After getting pushed back from its original fall 2018 release window, publisher EA announced that the game would instead launch in early 2019.

Electronic Arts held its annual EA Play press conference Saturday at 11 a.m. PT. The briefing kicked off a three-day pre-E3 event, which is scheduled for June 9–11. EA Play is being held at the Hollywood Palladium in Los Angeles; you can watch the live broadcast here.