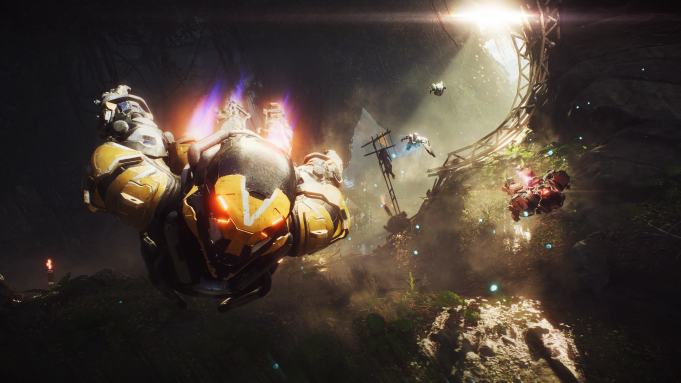 “Anthem” is EA’s upcoming third-person shooter, action role-playing game that features four different exosuits and a “contiguous open world” that can be played in with three other players.

The Javelins are advanced mechanic armor built to help humanity survive and protect themselves in the dangerous world of “Anthem.”

The suits shown off in Paris were the Ranger, Colossus, Storm, and Interceptor. Each of the suits have a special melee ability, grenades, launcher gear, support gear, and an ultimate ability. The suits also have two weapon slots that can be changed between missions.

Ranger Javelin Melee Ability
Shock Mace: When the Ranger javelin chooses to mix it up at close range, it deploys an electrified mace to send a medically-inadvisable amount of voltage through its enemies.

Ranger Javelin Grenade Gear
Quick to deploy, grenades lay down area damage for effective crowd control at a moment’s notice. Modified grenades can be found out in the field and can be equipped to create different effects, including Frost and Seeker Grenades.
Frag Grenade
Inferno Grenade
Frost Grenade
Seeker Grenades
Sticky Bomb

Ranger Javelin Assault Launcher Gear
The Ranger’s wrist launcher allows for a variety of modules to be loaded on for an extra burst of firepower. This provides a more flexible combat approach that can take down threats quickly.
Homing Missile
Energy Pulse
Spark Beam
Venom Darts
Blast Missile

Ranger Javelin Ultimate Ability
Multi-Target Missile Battery: Lancers can deploy a special ultimate ability that displays the true strength of their javelin exosuit. Dealing precise damage across a wide swath of the battlefield, the Ranger’s Multi-target Missile Battery allows it to target many fast-moving enemies with guided projectiles.

Colossus Javelin Melee Ability
Heavy Smash: The Colossus can use its massive chassis as a weapon both in a diving smash attack from the air and a hammering melee attack. This not only clears out smaller enemies instantly, but has a chance to knock down foes and leave them open to follow-up attacks.

Colossus Javelin Ordnance Launcher Gear
Utilizing the incredible strength of the Colossus, these shoulder-mounted weapons are capable of dishing out punishment to enemies near or far (your choice).

Colossus Javelin Support Gear
As the preeminent battletank, the Colossus is capable of supporting its allies by decreasing incoming damage or diverting enemy fire toward itself.
Taunt
Deflector Pulse

Colossus Javelin Ultimate Ability
Siege Cannon : Lancers can deploy a special ultimate ability that displays the true strength of their javelin exosuit. The Siege Cannon is ideal for clearing out smaller enemies, controlling enemies in a choke point, or putting some extra damage on a boss.

Storm Javelin Melee Ability
Every javelin has an innate melee ability which can be used to deal damage to targets at very close range. This ability does not need to be earned, nor can it be changed.
Fiery Strike: The Storm uses the seals on its arm to deliver an explosive flash that deals damage and knocks back enemies that have gotten too close, giving the Storm time to reposition at a safe distance.
Storm Javelin Kinesis Gear Abilities
The seals which are built into the Storm can use various gear to tap into the Anthem to release raw elemental energy in the form of kinesis abilities. Gear is picked up as loot during missions, and can be equipped or swapped out between missions. Lancers can equip three kinesis gear abilities total, one from each of the sections here.

Storm Javelin Ultimate Ability
Elemental Storm: Lancers can deploy a special ultimate ability that displays the true strength of their javelin exosuit. Manipulating the raw force of the Anthem, the Storm emits successive blasts of frost, electricity, and fire — ending with a meteoric finale.

Interceptor Javelin Exosuit Melee Ability
Every javelin has an innate melee ability which can be used to deal damage to targets at very close range. This ability does not need to be earned, nor can it be changed.

Double-Bladed Daggers: The Interceptor uses a pair of double-bladed daggers to deliver a multi-hit flurry of slashes, dealing damage in a chain of powerful attacks that can be continued indefinitely.

Interceptor Javelin Exosuit Technique Gear
The Interceptor javelin uses a variety of gear to perform devastating techniques on the battlefield. Gear is picked up as loot during missions, and can be equipped and swapped out between missions. Lancers can equip three gear in their loadout, one from each of the sections here.