Continue to Variety SKIP AD
You will be redirected back to your article in seconds
Jul 3, 2018 9:26am PT 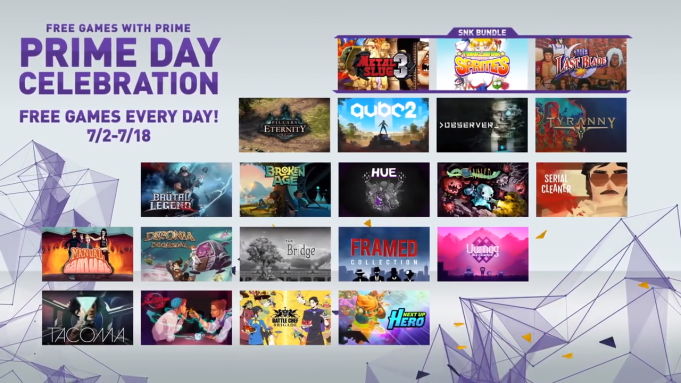 Twitch Prime members can take part in one of the service’s biggest free game promotions yet in the lead-up to Amazon Prime Day. During a countdown that began on July 2 and will run throughout July 18, Twitch Prime members can download a different, free game each day. Once downloaded, they’re free to keep forever. There’s a wide selection of vastly different titles up for grabs each day, with a few bundles thrown in to ensure variety.

The first game is up for grabs right now, and it’s “Pillars of Eternity,” which will be available throughout the holiday for those who celebrate the Fourth of July. There are some excellent games sprinkled throughout the month, and despite the fact that the promotion technically ends on July 18, the deals themselves span multiple days, just in case you forget to download one title on the day it debuts.

Over the coming weeks, you’ll be able to get gems like the excellent cooking/RPG hybrid “Battle Chef Brigade,” the chilling cyberpunk thriller “Observer,” and a smattering of other fantastic titles you may have missed upon their original debuts. Each selection is PC only, and must be claimed while logged into a Twitch account that’s been connected previously to an Amazon Prime subscription.

The full list of games on offer is as follows:

Aside from games, you can also pick up some free goodies for “PlayerUnknown’s Battlegrounds” as well as “Warframe,” though details on those freebies have not been disclosed at this time.

Twitch streamers SodaPoppin, SeriouslyClara, and Elegy will be online streaming various games being given away throughout the festivities, with an official schedule found via the Twitch blog here.

Amazon’s Prime Day 2018 begins on July 16, offering 50 percent more Spotlight Deals and over “one million deals” globally this year, for a wider selection than previous Prime Days. Deep discounts are coming to Alexa-enabled products like the Echo, Fire TV, and Fire tablets, with $100 off the Echo Show.

It’s been extended this year to last 36 hours, with special deals solely for Amazon Prime members on DVDs, Blu-rays, music, books, and more. While the Twitch Prime deals will stretch on throughout the next few weeks, you won’t get another chance to jump on any Prime Day deals after they’re gone, so you’ll want to make sure you jump on them when they happen. In the meantime, there’s plenty of time to enjoy a free game each day, so long as you have an active Prime subscription and a Twitch account.