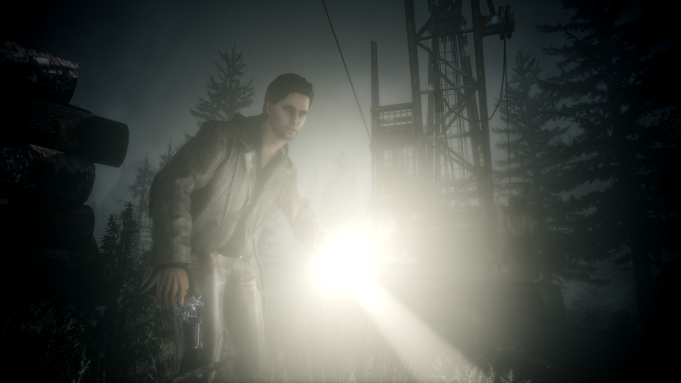 Contradiction partner Tomas Harlan said the plan is to start shopping the show around in October with Calloway’s full pitch. He said he’s already seen initial interest from a number of studios.

“‘Alan Wake’ was basically a TV series that was put into a game,” Harlan told Variety. “That was Sam’s vision. It was influenced by ‘The Twilight Zone,’ ‘Secret Window,’ Hitchcock, ‘Northern Exposure,’ a lot of U.S. television,” he said. “We plan to work closely with Sam on our this show. Sam is a huge part of this. This is his baby.”

“Alan Wake,” which was released on the Xbox 360 and Windows PC in 2010, followed fictitious best-selling author Alan Wake (Matthew Porretta) on a journey to a small town in Washington state, where he hopes to rid himself of prolonged writer’s block. What follows is an increasingly surreal experience that seems to bring the plot from his last novel — which he has no memory of writing — to life.

The game leaned heavily on an episodic structure that delivered levels as if they were episodes in a television series and even features small interactions with in-game televisions that featured snippets of TV shows created for the game. This blending of game and TV helped to redefine a form of interactive storytelling.

While well received by critics, the five-years-in-development game never got a full sequel. “Alan Wake’s American Nightmare” was more of a spinoff than a continuation of the first game’s story. Developer Remedy did work on a proper sequel for the game, but despite the original selling 4.5 million copies, that game was never realized.

Lake said in 2015 that he had big plans for the game, beyond even a sequel.

“Definitely what we have mapped out is a longer thing than the first game and a sequel; there is more to it,” Lake said. “In many ways, we see the universe as a bigger thing. Alan Wake is a very central character, but we have other characters around him like [friend and agent Barry Wheeler] and his wife Alice and Sheriff Sarah Breaker and other characters there. We feel this is a big universe to develop and explore in many ways.”

Speaking with Variety this week, Harlan declined to reveal specifics about the upcoming show’s plot or how it would fit into the existing games or the unmade sequel.

“I think it’s important to embrace those characters and to bring Alan Wake to where he was [in the video game,]” Harlan said. “We can’t start the show off where he is fully functioning, running through the forest, taking down lumberjacks.”

Harlan added that the show won’t tell a story that is in “lockstep” with the game.

Lake told Variety that while Wake is very much “in the heart of this story, there are vitally important characters around him as well.”

“The story of the original game is our starting point, the seed which will grow into the bigger story we’re exploring in the show,” Lake said. “We’ll be expanding the lore of this crazy and dark universe and diving deeper into certain aspects of it than the game ever did.”

That includes tapping into some of the story planned for that unreleased second game.

“Not only that, but through the years, we’ve worked on multiple game concepts and stories for Alan Wake’s world that have never seen the light of day,” Lake said. “All of this material will function as potential source material for the show.”

Lake declined to say, though, whether the show’s story will be official canon for the Alan Wake universe.

“In a story like ‘Alan Wake,’ a story filled with mystery and questions, answering this one would be a spoiler,” he said.

While Harlan said he hopes that the future success of the show could put Remedy in a position to finally make an “Alan Wake 2” video game (“That would be a dream of mine,” he said.), Lake was a bit more reticent to discuss that possibility.

“At the moment, there is no news of any further ‘Alan Wake’ games,” he said. “As before, we’re exploring these possibilities and hoping to make it happen when the time is right.”

The deal for the TV show came together over the course of multiple meetings and through a lot of persistence by Harlan.

While Contradiction created adaptations based on “Dead Rising” and “Mortal Kombat,” Harlan long eyed “Alan Wake” as something he wanted to bring to television.

“‘Alan Wake’ was a very linear experience,” he said. “It’s the finest story I’ve run across in video games. I’ve played through the game maybe 50 times.”

Over the course of several years, Harlan got to know Lake and the people at Remedy, often pushing them to agree to an adaptation, he said. But previous, bad experiences with Hollywood left them cautious about striking any deals.

“We had multiple meetings and they were very clear they weren’t interested in an ‘Alan Wake’ television show,” Harlan said. “I’d see them at E3, at the Nordic Games Convention and we became friends over time. I really love, love this game and they started to open up to the idea.”

Eventually, Remedy started discussing Harlan’s ideas for a show with him and that led to Contradiction creating a team and working up a concept on how the game would make the leap to TV.

“The next step was finding a writer who could create something authentic to the game experience,” Harlan said. “Who understood how a game should be adapted versus a novel or other linear experience.”

Harlan took a meeting with Calloway at E3 and his pitch “blew it out of the water,” Harlan said. “Remedy was blown away by his pitch as was Sam.”

The plan moving forward is to start taking meetings after Harlan returns from his wedding, which is this week, and then put together Calloway’s full pitch.

While Harlan is very aware of the long, spotty history Hollywood has with video game adaptations, he doesn’t think “Alan Wake” will fall victim to the same sort of issues that have haunted much of the movies based on video games.

Television is a big part of that. The medium, Harlan said, is a better fit for video game adaptations than are movies.

The rise and diversification of the sorts of television shows that are now being made for everyone from HBO and Netflix to the BBC, had a big impact on what Harlan thinks can be done for TV.

“It changed the world and how we look at things,” he said. “We have all of this runway now.”