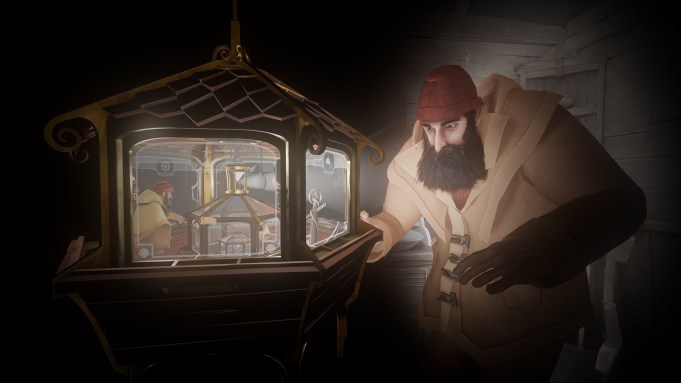 It boasts a unique VR gameplay mechanic based on the recursion principle. In computer science, recursion is a method of problem solving where the solution depends on solutions to smaller instances of the same problem. In a way, “A Fisherman’s Tale” is a co-op game, Vertigo said, but it’s one where you team up with multiple dimensions of yourself.

The game’s story focuses on a tiny fisherman puppet named Bob. One day, he hears a storm alert on the radio and has to get to the top of a lighthouse to turn on the light. But, when he tries to leave his cabin, something unexpected is waiting outside. The player, as Bob, will use their hands to pick up, throw, combine, and use various items to break the laws of physics and solve puzzles.

“What does it mean to be trapped inside a replica in an elusive virtual world?” Vertigo Games said. “‘A Fisherman’s Tale’ at it heart is a story about breaking away from illusions to find truth. And who knows, you may learn something about yourself along the way.”

Founded in 2008, Vertigo Games is a publisher and developer perhaps best-known for its VR first-person shooter “Arizona Sunshine” and its VR strategy game “Skyworld.” “A Fisherman’s Tale” is being developed by Innerspace in collaboration with ARTE, a public service European culture channel and digital network.