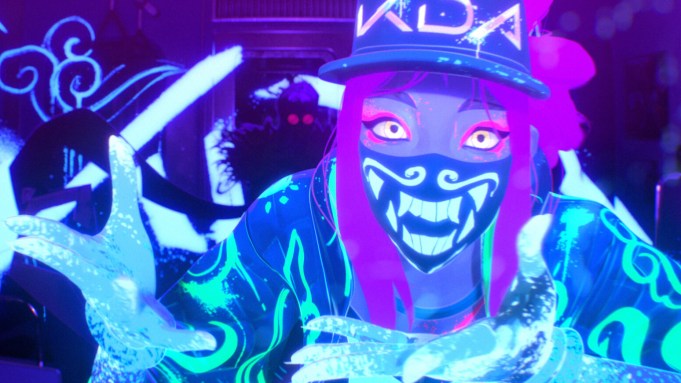 Riot Games created a hologram K-Pop band made up of characters from its “League of Legends” game and had them perform live during the World Championships in Korea over the weekend. The single by K/DA, voiced by Madison Beer, Jaira Burns and (G)I-DLE members Soyeon and Miyeon, managed to rake in 13 million views in its first 48 hours. Not bad for a group that doesn’t really exist.

With the debut single “Pop/Stars” charting at number one in the K-Pop charts for Apple Music in the U.S. and number five for pop music, the company is now considering what, if anything, to do next for a moment conceived as a one-off.

“We went into this really wanting to make a dope ‘League’ moment for players – albeit one where the fantasy of the champs being in the real world played out in an authentic manner that could live alongside others in their verticals (ie song had to be able to stand up to other pop songs, performance had to stand up to other performances, etc.),” Viranda Tantula, creative lead on Worlds Opening Ceremony and Music, told Variety in an email. “We really went into it wanting to make the singular moment as dope a possible and intentionally weren’t thinking much further into the future than that.

“With that said we’re super excited about the reaction from ‘League’ players and music fans alike, so while we don’t have any set plans as of now, it’s been fun chatting about where this could go over the past couple days since it launched.”

The music was performed by Madison Beer (who voiced Evelynn, seen with the car), Jaira Burns (who voiced Kai-Sa, who has rockets floating above her shoulders), Soyeon (who voiced Akali, the rapper with the spray paint can), and Miyeon (who voices Ahri, seen in the laundromat).

You can watch a video above edited by Variety, which combines the live performance — complete with game character holograms, the music video, and the choreography dancers. You can also read up on how the fictional band fits into the fiction world of “League of Legends” on its official website where each of the members have bios and stats. There’s even an interview.