Sir-Annoy-O and ‘Hearthstone’s’ History of Annoyance 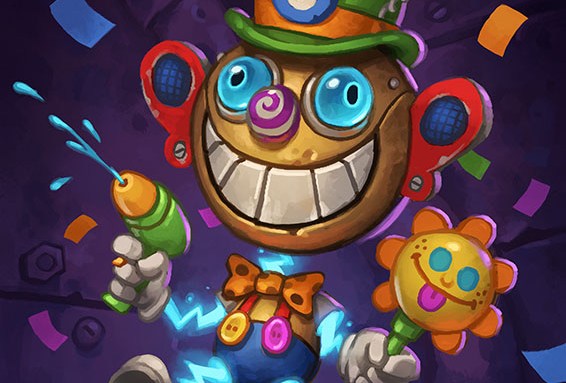 Illustrator Matt Dixon’s most known creation is also his most annoying.

“Annoy-O-Tron is by far…  I was going to say the best loved, but I’ll just say the one I’ve received the most reaction from people and that’s great,” Dixon told Variety. “I’m looking forward to the opportunity to expand the family tree.”

Dixon is a prolific illustrator for Blizzard’s many “Hearthstone” digital cards, designing the look and visual tone of more than a hundred of the game’s creatures. But one of his first was in 2014 for a living mechanical creation known as the Annoy-O-Tron, a copper-chested robot replete in gaudy pins, an oversized carrot-hued wig and wielding a bell in one hand and a bike horn in the other, his buck-toothed mouth frozen in apparent mid shout.

“As with all of the ‘Hearthstone’ cards, it started with a brief from Blizzard,” Dixon said. “In the case with Annoy-O-Tron, the brief was extremely brief. A brief brief. It was literally to create an annoying robot, it wasn’t much more than that. So I had full creative license to jump in there and do whatever I wanted.”

In creating this first of what would become a growing family of Annoy-Os, the most recent of which is the upcoming Sir Annoy-O, Dixon said he tried to think of the most annoying types of people and characters and then blended them all into one. At the top of that imagined heap was an “over-enthusiastic children’s entertainer.”

“I always begin by drawing,” Dixon said of that first concept. “As soon as I’ve got any kind of an idea, I like to get the pen to the paper. I’m thinking as I’m drawing. There’s not a clear procession of concepts as I get to the drawing.”

Instead, Dixon imagines the creation as he works and once finalized, he submits it to Blizzard to get their input.

“In this case, I was just channeling that kind of annoying guy with the brightly colored wing, the flower on his lapel that squirts water, the oversized clothes,” he said. “He’s in everybody face. He is fun, but just for a few moments.”

The original Annoy-O-Tron was tall and lanky, but Blizzard sent it back asking Dixon to align the design more closely with the “World of Warcraft” universe, from which the game draws its inspiration.

“Rather than lanky he became more compact, more chunky,” Dixon said. “That also helps art wise because he occupies more space in a card frame. It also makes his head bigger, so his expressions are much bigger in the frame. It was a simple change that had a big impact on the design.”

When Annoy-O-Tron hit as part of the Goblins vs. Gnomes expansion, he became an instant hit. But Dixon assumed that was the last he’d see of his glaring design.

“Three years later, [Blizzard] decided they wanted to revisit some of the more popular and maybe infamous characters that appeared in the game and show them in a corrupted fashion,” Dixon said. “So that became Annoy-O-Tron’s evil cousin: Psych-O-Tron.”

The brief for Psycho-Tron was for Dixon to essentially twist that initial character, taking a bot that was fun and friendly and colorful — yes, and annoying — and making him darker.

“I changed the shapes,” Dixon said of his approach to the new design. “The original has a lot of friendly, curvy shapes, Psych-O-Tron is much more angular. Everything is about the same as Annoy-O-Tron, right down to the post, but he is sharper edged. He is more aggressive, but not in his demeanor. He is till a ridiculous character with crazy hair.”

Dixon also added an amplification system to his back, which lead to the idea of changing out his weapons of choice to an electric guitar. Dixon calls it his “new weapon of noise terrorism.”

People seemed to love (and hate) Psych-O-Tron when he hit.

The next member of the family came earlier this year with the addition of Annoy-O-Module.

“He feels like the younger brother to me,” Dixon said. “He was slightly different. The brief was to create another member of the family and there were some restrictions for the design.”

This new creation had to fit in with the magnetic theme of the Boomsday Project card packs.

“That meant that his limbs had to be replaced with blue electrical energy,” Dixon said. “In practice, that didn’t really limit the design, it just made him a collection of annoying props. It meant I could focus on just the annoying elements and the challenge of previous creations — gluing those together in a plausible manner — I didn’t have to worry about.”

Each new Annoy-O is for Dixon a chance to outdo himself and his previous designs, to make the creation even more annoying. That’s very evident in the design of the Annoy-O-Module which wears a decorated bowler hat, obscenely obsequious smile, has speakers for ears and carries a squirt gun and rattler of some sort.

“I took all of the basic elements and kept that turbo-charged children’s entertainer and just tried lots and lots of annoying props,” Dixon said. “The ones I thought would be too extreme I left in there and Blizzard approved it.”

This week’s newest addition to the Annoy-O family presented a bit of a challenge to Dixon and the underlying conceit of the character. Sir Annoy-O sounds as if, perhaps, he may be a bit more staid than his clownish kin.

But that wasn’t the way Dixon took the character.

“My idea was we had a character who was going to be presented in Stormwind City,” he said. “I tried to imagine this annoying little robot arriving in Stormwind and he’s a super fan and what would he look like if he raided the souvenir shop?”

So Dixon packed the knighted bot down with absurd souvenirs like an inflatable sword, a silly shield and other bits and pieces.

For once, Dixon’s design didn’t go far enough for Blizzard and then bounced it back.

“Blizzard wanted to see something much more annoying,” he said.

So Dixon worked at “improving” Sir Annoy-O’s weapons. After a bit of thought, he decided that the most annoying instrument in the world is a bagpipe and that adding that to Sir Annoy-O would also allow him to explore his “Scottish heritage.” Also, he reasoned, “bagpipes are a preposterous looking thing, so it fits the aesthetic.”

That too was kicked back. The third concept was to go with a sort of one-man band approach with a huge drum. He’d also retain the inflatable sword and get a squeaky hammer.

The design worked, and Dixon went back in to add a sort of fanfare of trumpets and a distant castle to the image.

Sir Annoy-O hits “Hearthstone” with the start of the game’s Hallow’s End event later this month.

While Dixon has designed more than a hundred characters for the game, he said that the Annoy-O creations seem to be his most memorable. Something he first noticed at the comic conventions he attended.

“I was flabbergasted at the reaction Annoy-O-Tron got,” Dixon said. “I had no idea that he would provoke such a range of reactions.”

Dixon said people wandering past his table at a convention would recognize the character and rush over to find out what he had to do with it.

“Then they would tell me  how much they loved him,” he said. “Or the polar opposite. People would gnash their teeth and threaten me in a friendly manner because this guy was so annoying in game. I had never experienced a reaction like that in an illustration I’ve done before. It endeared me to Annoy-O-Tron in a way I’ve not felt about any illustration I’ve done in the course of 25 nearly 30 years of professional illustrating.”