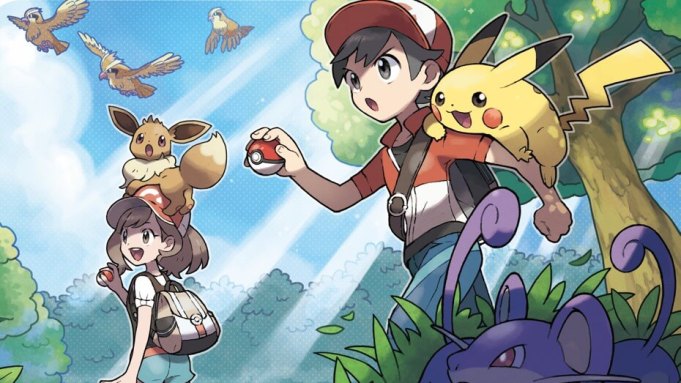 A nostalgia-filled fanfest, “Pokemon Let’s Go Pikachu” and more importantly “Pokemon Let’s Go Eevee” gives fans of the series one of the freshest Pokemon experiences yet while also offering a fond glimpse of the past. As the first of the core series to present with HD graphics and at times, on the big screen, there’s something magical about even just looking at this game. It recreates a sense of how childhood memories have warped to perceive the original titles without the clunkiness of a decades-old game.

As well as being a loyal recreation “Pokemon Let’s Go Eevee” brings some of the biggest changes to date into a Pokemon title by integrating features from the popular mobile title, “Pokemon Go”. Gone are the random encounters of wild Pokemon, instead they roam around freely in their allotted areas. Not only that but now you don’t even battle them. Upon meeting a wild creature the game switches to a “Pokemon Go” style catch screen where players need to toss a ball for a chance at catching.

At first, such big changes to what is so quintessentially a Pokemon experience were jarring and worrisome. It could feel like an oversimplification but after playing for a few hours it begins to feel like a refinement. The constant battling found in previous titles can get fairly repetitive and walking two steps to be interrupted by an unknown assailant could become frustrating. Giving some variety with these new catch screens and letting players choose which Pokemon to bother interacting with streamlines the experience and ultimately makes it more enjoyable.

There were some aspects missing in this refinement, like the danger that comes with random encounters or the surprise of seeing which Pokemon jumps out. Some of that comes through with Legendary Pokemon, which now have to be defeated before catching them. Motion controls can also vary depending on your method of input, so it feels like there’s still some work to be done in bringing the full Pokemon experience into the present day. Ultimately though, these improvements felt like a good step in the right direction for future games and adds far more than is taken from the experience.

Another aspect of streamlining has you carrying your Pokemon box with you at all times. Previous games had players making their way back to a PokeCenter to access their collection of pocket monsters. Now you can pull open your bag and change thing up on the fly. Initially, this change created concern that the game would be too easy but in action all this really does is stop the needless trudging back and forth. The same could be said of most of the changes that come with this new pair of games, they’re far less tedious with little in the way of a drawback.

A major theme of all Pokemon games is the bond between trainer and Pokemon, and never has it been as important as in “Pokemon Let’s Go Eevee.” Watching Eevee and your other Pokemon travel and interact with the world with you is joyous. Witnessing all the different ways you can walk with or ride on your different friends and having the ability to pet and play with them adds to the trainer fantasy.

Right from the get-go your partner Pokemon is a pivotal role in your journey. While this tugs on the heartstrings, in some more practical ways it felt a little too much. Eevee is always much stronger than any of the other Pokemon in the game and can also learn special moves to augment that power. Playing exclusively with Eevee gives so much variety and power that searching for and training other Pokemon isn’t really necessary. It also makes playing through the game far too easy. Ultimately, there’s little incentive to leave the comfort of your partner’s side.

Eevee can also learn abilities called Secret Techniques which replace the older games’ HMs and allow you to interact with the world in new ways. These techniques are designed for the game’s character to use but every time you go to learn one, Eevee insists on being taught the abilities. While it’s nice to see HMs become a thing of the past and no longer take up a precious move slot on one of your Pokemon, it also makes it feels as though the trainer was just some useless goof the wonderous Eevee brought along on her adventures.

The world of this take on Pokemon has changed in many beautiful and interesting ways but still managed to remain very clearly a faithful recreation. For those who played enough of the originals, you’ll practically be able to walk through parts of this game blindfolded and still know your way around. On the one hand, this feels at times a bit sad because it lacked the sense of surprise and wonder of a new game, but that familiarity made the small changes that do exist in some areas interesting and notable. The cryptic nature of puzzles from the older titles have been dumbed down a bit and there is generally an easier or less fussy nature to the game as a whole, which makes sense as veterans who may crave the difficulty know all the answers already and for new players, it’s an entirely accessible experience.

“Pokemon, Let’s Go Eevee” is a welcoming addition to the beloved series. It has so much heart behind the little details and seems powered by a general sense that player enjoyment was behind many of the key decisions that went into making this game. While potentially lacking in difficulty sometimes, almost every change is actually an improvement that brings Pokemon as a whole into this new generation of gaming. This feels like a true Pokemon title, purpose-built for all fans, old and new, who love the series.