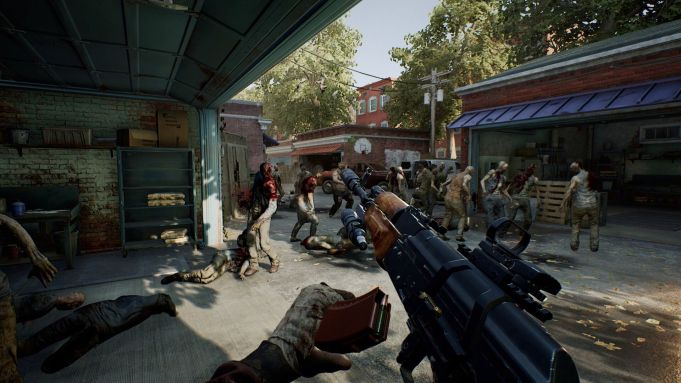 Like a hurricane, like a wildfire, like an earthquake, the zombies of “The Walking Dead” aren’t a conflict to be overcome, they are a force of nature to be avoided.

The same is true in upcoming game “Overkill’s The Walking Dead.” The sooner players learn that valuable lesson, the better their chances of survival.

I was warned to avoid the zombies before spending time on the title, that I should conserve my ammo, that humans were the real threat. But years of gaming had slowly converted me to a scorched-earth player. If it was a threat, if it was of potential use to the enemy, I destroyed it, or tried to.

My time with the game opened in a four-player cooperative mission set in central Georgetown, just outside of Washington, D.C. Myself and three other players were tasked with recovering a water purifier from a rival group that called itself the Family. They had previously attacked our group with a horde and were heavily armed.

But before we could take them on directly and make a go at swiping that bit of gear, we had to survive the trip to their camp.

Payday
“Overkill’s The Walking Dead” was first announced back in 2014 with a high-touch cinematic teaser trailer that seemed to promise a narratively driven, zombie-packed shooter.

The team had just launched “Payday 2” with the promise of long-term, continued support, when they managed to finagle a meeting with “The Walking Dead” creator Robert Kirkman and his multimedia company Skybound.

“We had a great meeting,” Almir Listo, Overkill Software’s global brand director, told Variety. “We came up with this idea and he wanted to do license gaming correctly. We wanted to take “The Walking Dead,” take everything we learned from “Payday” creating a co-op shooter and make a new game.”

Kirkman, a big fan of video games, knew that the right sort of title could work with the brand. Kirkman had already seen tremendous success through the deal with Telltale for its narratively-driven games based on the comic and he was open to a new take on the franchise driven by action. So he OK-ed the idea and the Overkill team started working on their own script.

The backstory of the game has players taking on the role of one member of a group of four survivors in the post-apocalyptic world. Early in the game, this unit of four — who Listo likens to Rick Grimes and his group — meets someone who invites them into their camp. Being a part of this bigger group brings new experiences and challenges to the foursome.

Because AMC owns the rights to the television show, this game is based in the comic book version of the story, bringing with it that over-the-top dark, serious tone.

While the game will have story elements weaved throughout it, Listo says the game is pure action.

Hands-On
“The more noise you generate, the more walkers you will attract. Note that car alarms and environmental traps also create sound. Check your surroundings.”

It’s the last warning we get before we drop into the world of “The Walking Dead.” The four of us spawn on a brownstone-lined street. There are zombies nearby, but not close enough, or enough of them to be worrying. Without even thinking about it, several of us walk over to the nearest clutch of zombies and start taking them down with our melee weapons. The noise, although not as loud as gunfire, soon attracts more zombies. They slowly trickle toward us and we take them down easily. No challenge. No concern. Until it’s too late. Without noticing it, I backed into another shambling group of zombies, swiveling I starting taking them down, but the initial group I was disposing of, continue you their slow attack, before I know it, I’m overwhelmed and down. Another player comes over to help me and she too is knocked down. The whole thing is over before we realize it.

Attempt two and we decide to ignore the zombies. We’re looking for ammo, and other bits and pieces, so we make our way into one of the homes. We easily clear both floors of the house and then make our way out of the back door and into the backyard. Where we realize that one of our team is still inside, distracted for just a few minutes, we break-up and soon we’re all down.

Attempt three comes with more focus and more knowledge. We need to find a way past a gate, gathering pieces to open the blockage. We work our way as a team through the brownstone, never bothering with the top floor. We stay side-by-side as we work toward the gate. Things are going well, until they aren’t. One in our group tries the door on a nearby car, setting off a car alarm and attracting a flood of slow moving walkers. Before we know it, it’s over.

Our fourth attempt starts with the sort of clear-headed, sitting-up-in-your-chair moment that comes when you realize that you haven’t been taking the game you’re playing seriously enough. We’re focused. We avoid the dangers of separation. We walk around walkers, instead of trying to kill them. We avoid cars. We get past the gate. We clear the area and finally find the enemy encampment. Stupidity seems to flood into our team as we instantly forget all of our hard-earned lessons and engage the first non-walker enemies we see with a heavy barrage of firepower. We take them down, but it alerts the rest of the camp, as they begin to flank us, we retreat, firing away as we back directly into the shambling horde attracted by our gunfire.

Our fifth, and final attempt gets us past the zombies, past those perimeter guards and finally into the meat of the encampment and within striking distance of our goal. I manage to find the purifier, but we end up in a gunfight. This time the noise attracts walkers who aid in our attack. Because we’re inside, the perimeter guards — whose focus is now turned away from the constant threat of the undead — are taken down by walkers. We would have cleared the base and the mission had it not been for a sole enemy, stealthily stalking us from some hidden location, taking us down one by one with a sniper rifle. We see him, but not until it’s too late and the mission ends.

The lessons we learn are mostly what we were told at the beginning. Silence is your friend. Walkers aren’t to be trifled with. Melee and close-quarter combat weapons are far more efficient at killing the ambling masses. Ammo is scarce and the living are the major threat in this game, so save your bullets for them. It was also interesting to find that scavenging as we worked our way through the level didn’t just provide us with ammo, but also the equipment we needed to quickly craft things like explosives while on the go.

The Long Game
Overkill knows it has a hit on its hands, so it doesn’t seem as worried about the title’s launch. Instead, the team is focused on how they will ensure the game’s continued success post launch.

This also happens to be an area where the developers have a tremendous amount of experience. It’s been five years since the launch of their last game, cooperative heist shooter “Payday 2,” and they still support the game with new content. The last batch of DLC was released in November.

The team has also learned a lot from Starbreeze Studio, which acquired Overkill Software in 2012. “Payday 2” was the first game published after the deal and helped Starbreeze make a record profit, an abrupt turnaround for a company that had a history of losses since its foundation.

The success led to Starbreeze becoming a publisher of other studio’s content and in 2016, they published Behaviour Interactive’s “Dead By Daylight,” a title that, like “Payday 2,” has managed to live long past its launch and continue to make money.

Between the post-launch successes of “Payday 2” and “Dead By Daylight,” the Overkill team feels like it knows how to make a game live and be successful for years past its release. And they plan to apply that to “The Walking Dead.”

“What we’re trying to do is give games seasons,” Overkill Software’s Listo said. “Why do games have to end after all of the effort of the launch? It doesn’t need to.”

And the team has a lot of time and support to make this work. Listo said that when the deal was originally signed in 2014, before work started on the title, it was for ten years.

“Skybound is interested in making sure this works,” he said, adding that Kirkman loves what he’s seen so far.

“This has been a long time coming.”

Survivors
With “The Walking Dead,” action is still at the core of the experience, with everything else being built around that. But the team wanted to make sure that players knew that this game would have much more narrative and character development. That’s one reason the developer introduced the four playable characters one at a time through their own trailers.

“We wanted to show our community that we are trying to get them to know the characters better as people,” Listo said. “It is not only the actions of the characters, but also how they feel. We want to explore that in the game.”

The design of the game is meant to get players to think like the survivors of the comic books. “You see the survivors in the comic books having to think about what they are doing,” Listo said. “Do we need to do that to complete our objective. The standard way most people play a shooter is that everything you see you kill. Hopefully people will react differently to this game.”

And the team is still experimenting with the gameplay, something they can do because they remain agile with an in-house quality assurance team and testers and developers who are always open to discusses about design.

“There’s a lot of discussion going on,” Listo said. “There’s a high ceiling, so anything goes.”