‘Ori and the Will of the Wisps’ Retains First Game’s Charm, Improves Combat 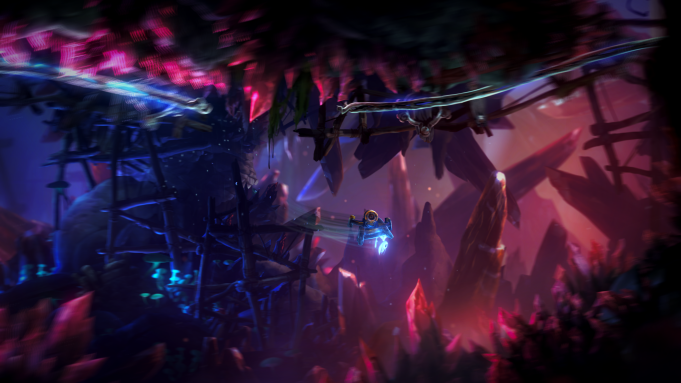 “Ori and the Blind Forest” enchanted gamers with its bright colors and adorable hero from the moment it was announced in 2014. The attractive Metroidvania game hides a dark secret, though. Brutal difficulty spikes stood between many players and the game’s uplifting conclusion. The sequel aims to correct those problems.

Moon Studios is set to release “Ori and the Will of the Wisps” in 2019, continuing spirit guardian Ori’s story. The E3 2018 trailer sets the stage for another vibrant adventure.

Unlike the first game’s tragic opening, our first glimpse sees the characters from the first game (the maternal Naru, the playful spider Gumo, and Ori) together. They have taken in a small owl, Ku, the orphaned child of the first game’s antagonist, Kuro.

Unfortunately, the rest of the story is still being kept under wraps, and early glimpses of Ori flying atop Ku haven’t yet been explained. Instead, Moon is using E3 to talk about refinements to gameplay.

One of the most engaging things about playing as Ori is how fluidly the small creature moves through the environment. The first game’s double jump and dash returns, with the addition of a grappling hook that can be used to get high off the ground and avoid spikes. Like any good Metroidvania, moves earned later in the game will let you access previously out of reach of areas and shortcuts.

The demo features burrowing, which allows Ori to swim through sand. The Windswept Wastes area on display also includes platforms made of sand that disappear moments after Ori touches them. These can later be used to propel Ori into the air with the burrow ability.

“Abilities shouldn’t be one-dimensional,” says game director Thomas Mahler. “They should be able to be used for multiple purposes.”

Combat is a bigger part this time out, with more weapons (like a slow hammer, speedy sword, and bow and arrow) and spells at players’ disposal. These can be easily mapped to the face buttons and changed on the fly with a new radial menu.

“It was really important that if we were going to introduce more equipment into the game, that we have a streamlined way for people to access those things on the fly,” says senior producer Dan Smith.

Likewise, the upgrade system has been completely redesigned. In “Ori and the Will of the Wisps,” players will find spirit shards that can be equipped. These include a compass pointing to the next objective, a shard that splits your projectiles into multiple pieces, and another that amps damage output while making you lose more health when hit. Each of these can be upgraded, giving players the option to tailor the experience to their playstyle.

Part of building out a bigger “Ori” adventure is the addition of more NPCs and side-quests. In the demo, players encounter a bird looking for a silver needle. Taking on these small exploration missions will net you new weapons, spells, or spirit shards. In short, they’re worth going out of your way for.

“People really liked the characters we had in ‘Ori and the Blind Forest,’” Mahler says. “We wanted to have a larger cast of characters. This is inspired by games like ‘The Legend of Zelda: Link’s Awakening.’”

Moon Studios is making smart changes to improve some of the rough difficulty patches. In the first game, players could get trapped at the start of a particularly challenging platforming section with no way to back out and attempt later.

“One of the mistakes that we made is that before that sequence, we saved your game,” Mahler explains. “You could only keep going forward. This time we’re changing that, so you can go back into the overworld when something like that happens and find new weapons or abilities and try again.”

And it’s a world you’ll want to explore thoroughly. Not only are there plenty of secrets tucked away, but a new physics system makes everything feel more alive.

Even with an in-depth look, “Ori and the Will of the Wisps” is keeping its secrets. Moon Studios hasn’t told us why Ori has embarked on another quest or who is threatening the forest. Based on the E3 demo, whatever the reason for the adventure, it’s going to be a gorgeous ride.