Inside Remnant, an Interactive Story Told Through Mixed Reality and Food

Mixed reality, the merging of the real and virtual worlds, is slowly changing how we work, how we play, and how we communicate. Now, two women are using it to change how we share meals as well.

Remnant is an immersive, interactive dinner experience that pairs food with technology to tell a story. It’s the brainchild of Feminist Frequency executive director Anita Sarkeesian and Magic Leap interaction director Aleissia Laidacker. A self-described foodie, Sarkeesian was inspired to create the project after hearing Laidacker give a talk about mixed reality and how it can bring digital content and game design into the real world. She pitched the idea for Remnant about a week later.

Laidacker was immediately interested. Her father is a chef, and she once briefly considered giving up game development for her own culinary career. For her, it was an opportunity to combine two of her passions.

“I feel like going to eat food is something that we all do multiple times a day, so why can’t this be more collaborative?” she told Variety.

Sarkeesian and Laidacker created a company called Mixed Flour and enlisted the aid of two chefs for their first dinner, which took place in Copenhagen, Denmark last May. Milton Abel II is a pastry chef who’s worked for some of the best restaurants in the world, including The French Laundry, Per Se, and Noma. He’s now head pastry chef of Andersen & Maillard in Copenhagen. Nick Curtin is the former executive chef of Compose and Rosette in New York City, as well as a former “Iron Chef America” contestant. He’s currently running his own restaurant, Alouette, in Copenhagen. He said the idea behind Remnant — to create a meal that elicits the same emotions you experience while playing a video game — made him want to tackle the project.

“As chefs, how we create dishes can become relatively static, as it can be difficult to create super conceptual dishes without alienating guests. The chance to create not just a story with food, but a specific narrative built on emotion, that was an exciting and inspiring opportunity, and one I couldn’t pass up,” he said. “I started to think about adventure games and the hero cycle. The idea of home, a call to adventure, the journey into the abyss, and the return home. Could we create that cycle in food?”

About 41 guests were invited to partake in Remnant’s culinary adventure, which unfolded over several hours and three courses. The interactive elements were introduced slowly as the night progressed. During the appetizer course, projection mapping, sound effects, and actors were used to establish the narrative, while the chefs served up canapes and other comforting, familiar snacks to set the tone.

The second course incorporated augmented reality. Guests were given iPads and used them to interact with virtual objects on the tables. The actors encouraged them to forage and hunt for food within the app, which led to the meal’s main course — deer carpaccio served on a pair of antlers, with a red sauce that looked like blood, and a roasted deer leg served with vegetables. 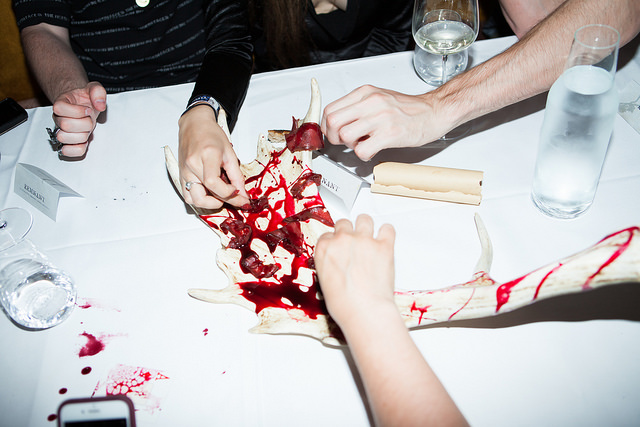 For the final course, Laidacker and Sarkeesian turned the restaurant into an escape room, complete with puzzle boxes for each table to solve. Finishing the puzzles unlocked the story’s ending — and the dessert. Then, at the end of the night, each guest received a little box containing a fresh croissant and jam for the next morning, a delicious reminder of the meal and narrative they just encountered.

“We wanted the experience to resonate with the people who attended and think about it after they left,” Laidacker said.

“If you’ve ever had a big multi-course, multi-hour meal, those experiences for me have always been really bonding with the people that I’ve had them with,” Sarkeesian said. “If I’m sitting there and eating a meal for five hours with three other people, I remember those experiences very well and I feel like we went through something together. That’s kind of what we’re trying to do here. You’ll experience something that you can’t experience any other way. It will be this rich, memorable moment for you. Bringing together our love of technology and bringing together our love of food just seemed very natural.”

Guest response to Remnant was overwhelmingly positive, Sarkeesian and Laidacker said, and people were generally forgiving about the occasional bump in the road. The escape room portion of the evening took way longer than expected (puzzles and wine don’t always mix), which threw the careful timing of the meal off course. Sarkeesian and Laidacker expected guests to solve the puzzle boxes in about 15 minutes, but it took them 40 minutes instead. Meanwhile, back in the kitchen, the pastry chefs were yelling that the ice cream was melting. The women tried to move things along by dropping some hints, but the guests didn’t take them. They were so engrossed in the puzzles they wanted to solve them without help.

“That was a really nice moment for us in terms of how engaged folks were,” Sarkeesian said. 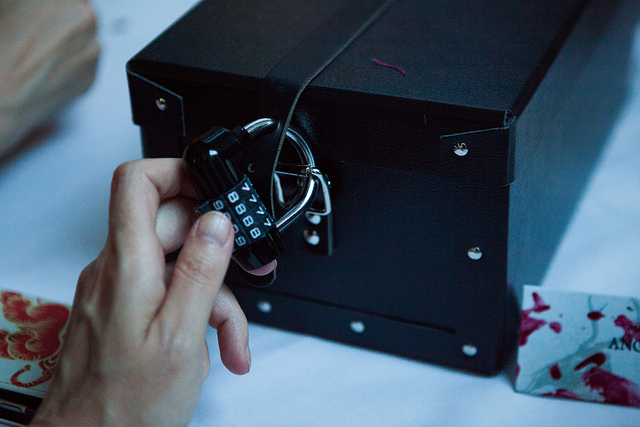 “Overall, it was a nice experience,” said one guest who chose to remain anonymous, “and props to Anita and Aleissia for this brave venture into unexplored territory, although it was also noticeable that this was just the pilot for a very ambitious project. Some things felt more polished and well-planned than others, but I’m excited to see future iterations and how it all develops. I believe events like this which combine many different mediums have a huge potential.”

Now that they have one dinner under their belts, Sarkeesian and Laidacker plan to do several more in the near future. Although dates and locations aren’t set yet, they said they definitely want to bring Remnant to the U.S. They want to create new and different experiences as well. “Maybe if folks want to hire us to build an experience for their particular event, that is something that we would be absolutely excited about,” Sarkeesian said. “I don’t know what format it will take yet, but we definitely plan on expanding this.”

“Anyone who’s worked in the video game industry, our whole job is about bringing story and fantasy and beautiful visuals to the screen, but now through mixed reality we can do that with anything,” Laidacker said, “and we can bring that to any activity or any physical space in the real world.”