Hideo Kojima on Casting ‘Bionic Woman,’ the Influence of Film, Importance of Secrecy 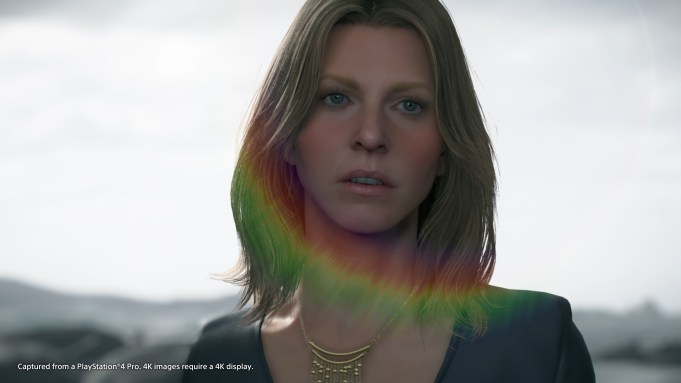 It took an impassioned three-and-a-half-hour presentation, sometimes nearly punctuated by tears, to convince Lindsay Wagner (“The Bionic Woman”) to take a creative leap of faith and appear in a video game in development by Hideo Kojima, the auteur game-maker recently told Variety.

Long a fan of Wagner’s work, Kojima said he wanted her for his upcoming game, “Death Stranding,” but knew she famously didn’t like to do work that depicted violence.

“When I first tried to approach her, her agent mentioned this,” Kojima told Variety through a translator. “But I really wanted her to be in the project, so I said I just wanted to meet her and talk with her.”

Wagner had heard of his request and did a bit of research, discovering that many of Kojima’s past games, while featuring violence, had anti-nuclear warfare themes. So she agreed to the meeting.

Kojima said, during a meeting that lasted more than three-and-a-half hours, he talked to her about his philosophical approach to the game, its still-mysterious themes, and how he makes the games he makes. He said several times in the meeting he could see her becoming visibly moved and getting teary-eyed.

But that meeting started with Wagner telling Kojima that most games are very violent and that she would like to see that change.

“So I explained to her the concept of ‘Death Stranding,’ as something I’ve been thinking about for a long time,” he said.

He told her that in the beginning, mankind developed tools, the first of which was a stick. The stick, he said, was used to create distance from something you don’t like, to enact violence. The stick, today, he told her, is the gun.

Next, mankind developed the rope. The role was created to pull what you wanted to you. All of human culture, Kojima told Wagner, sprung from those two tools.

“Games have a 30-something-year history that has evolved over time, but games are still about sticks, about guns,” he said he told her. “Games are connected online, but it’s still about, ‘I’m on top, I’m better at using sticks.’”

“What I explained to her is that while this game will have sticks — that the player will be able to use sticks — that is not the concept of the game,” he said. “The aim of the game is for the player to use ropes. I am making the game in such a way that this comes natural to the player, this alternative, of using ropes. And I went into detail on how I intend to do that.”

The theme of “Death Stranding” is about connection, he told her.

“She said, ‘You can do such a thing? That’s impressive,’” Kojima said. “And she agreed with what I’m trying to do and she took this offer of participating in this project.”

Kojima described the process as one of getting to know one another and gaining Wagner’s trust. It’s similar to how he believes Norman Reedus (“The Walking Dead,” “The Boondock Saints”), Mads Mikkelsen (“Doctor Strange,” “Rogue One: A Star Wars Story”), and Lea Seydoux (“Blue Is the Warmest Color,” Spectre”) were all convinced to participate in the game.

“Lea is a worldwide known actress,” he said. “She gets offers from all over the world, so she can pick whatever she wants to work on. It’s not the agent that decides what project for her to take, it’s her. The same is true for Mads.”

In both cases, while Kojima had some working documentation for the game, he didn’t have a completed script, so he had to explain his vision to both of them.

“The only way to do this is to exchange the vision and theme of the project with them and out of that have them trust me,” he said.

Mikkelsen’s agent told Kojima after Mikkelsen took the part, that Kojima was the “first and last person Mads agreed to work with without going through a script.”

And Reedus, who was signed first to play the game’s central character, had even less to base his decision on.

Reedus later told Kojima that he was attracted to work on the game because it was something new.

“Something Norman says often when we are together is, ‘I don’t know how much more famous I can become, but for me it’s not about that, it’s about what I can do at this point.’ Mads and Lea say similar things. So maybe I just came to them at the right moment.”

Once the actors were locked in, Kojima’s team had to go about getting 3D scans of them, which were done in the U.S. and U.K. to work around their busy schedules. Schedules also play a big part in how their performance captures come together.

While the captures can be done individually, Kojima tries to get the group together to act out scenes whenever possible. When that’s not possible, the team finds itself traveling to wherever the actors are to capture moments.

Earlier this month, for instance, they traveled to Atlanta where Reedus was shooting “The Walking Dead,” to capture some voice recordings with him at a local studio.

That the upcoming game is cast with so many stars — film director and Kojima’s friend Guillermo del Toro (“The Shape of Water,” “Pan’s Labyrinth”) is also said to be in the game in some manner — is both a sign of the growing connection between game and movie creation and of Kojima’s own well-publicized love of film.

He tells Variety it’s hard for him to say which films have influenced his work on “Death Stranding,” not because he’s too busy to watch them, but because he tends to watch one or more movies a day.

“I can’t say this is the movie I’m referencing for this,” he said. “I’m pretty sure that out of all of the stuff I consume, they are influencing me, but I don’t have any particular reference.”

Increasingly under Konami, where he worked prior to breaking free and forming his own studio, Kojima’s work had become more and more cinematic with longer, cinematic sequences and stunning, surreal visuals.

The tantalizing teases for “Death Stranding” show that, if anything, Kojima seems to be creating work even more immersed in the surreal. But he said he’s mindful that his work needs to straddle a line.

“I want to keep the balance between authorship and having it be entertainment,” he said. “Sometimes I see very artistic movies, independent films, but I do want to a go to a midpoint so that people who enjoy indie films and Marvel films can both enjoy this game.”

Each of Kojima’s works also seems to highlight the shrinking distance between a game and a film. But Kojima himself said while he’d love to one day create his own movie, he doesn’t see the two ever completely merging.

Instead, he said, he believes a new form of entertainment will emerge to fill the gap between the two.

While everything shown of “Death Stranding” could be described as film, it is very much an interactive work, a video game.

What we know is that the title is a reference to whales that beach themselves for unknown reasons and then slowly die under their own weight. We know that Reedus seems to be a delivery man of some sort and that babies play some bizarre, though important role in this world. It’s unclear if the game is horror, science fiction, action, stealth, or some amalgam of many genres. We don’t even know when it will come out.

That secrecy surrounding the game is in part, Kojima said, a reaction to the social, open, publicity-driven world we all live in.

But Kojima has come to believe that publicity-driven approach to a game release is a bad idea.

“It’s like a math problem, where knowing the answer is not that important,” he said. “The important thing is the process of getting to the answer.”

Marketing of games create a missed opportunity, he said, it reveals too much of a game and destroys the most important part of what makes a game a game, the interactive journey.

“I don’t want to take away the most fun part for the players.”