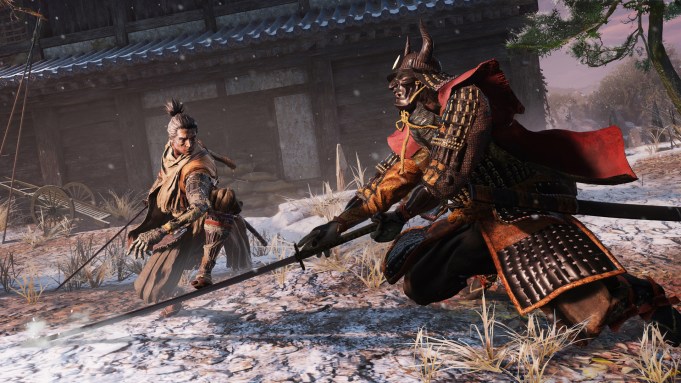 The upcoming action-adventure game by FromSoftware, creators of masterfully difficult games like “Dark Souls” and “Bloodborne,” bring much of that difficulty to its latest work, which is played from the third-person perspective and seems built around the spirit of Japanese sword martial art Kendo.

Rather than hacking away at enemies, trying to deliver death by a thousand cuts, “Sekiro” asks its players to focus on an enemy’s posture. Slow, meaningful, perfectly timed blows or parries eventually break the opponent’s stance, allowing you to deliver a single, beautiful death blow. The idea seems in many ways extracted from Kendo techniques which focus on weakening an opponent’s spirit and landing single, meaningful blows.

In practice, the game asks a lot of its players, especially those who might not be used to such a methodical, reflective approach. During my time with the game earlier this month, I easily took down the low-level guards found loitering in the gardens, on the perimeter, and among the squat buildings inside the walls of a beautifully detailed Japanese castle. Sekiro is masterless samurai who uses a katana sword and his prosthetic arm on his path to revenge.

The prosthetic features a number of useful weapons and gadgets, including a massive axe that can be used to knock down a lesser opponent’s shield. Gameplay in the short demo delivered a mix of grappling hook traversal, stealth kills, and standard combat, culminating in fights with more meaningful enemies, which required much more focus on strategy and timing.

Before playing myself, I watched a spokesperson for the game quickly work their way through the demo, first taking down a number of guards and then slipping into a short cat-and-mouse battle of swords with a samurai general. It’s these moments when the game’s nuanced sword combat comes into focus. Player and enemy attack, deflect, parry, jumping out of the way of sudden incoming death blows and eventually delivering their own death blow. The sword combat is fast, frenetic, visceral.

After taking down the general, the player is able to save at a sort of checkpoint system and then move on to tackle a giant ogre with remnants of a broken stockade still on his neck and chains wrapped around his wrists. The ogre is more focused on melee attacks, delivering wrestling-like body slams and grabs, rather than using a weapon.

When you run out of health in “Sekiro,” the player can choose to either die or use a resurrection, though that second option is limited.

After dispatching the ogre, the spokesperson made their way into a massive canyon where they were confronted by an enormous ice snake. Here the player has to dodge the attacks and sneak to survive. The game, I’m told, will be packed with hidden areas when it launches, including some in these rocky crags.

The demo ends with Sekiro walking over a bridge, thick fog lingers, Japanese maple trees, its red leaves carpeting the wood planks of the bridge, deliver a sort of beautiful tableau. And then a massive, corrupted monk slowly spins down out of the sky, landing on the bridge to offer us a first look at one of the game’s bosses.

My time playing the game didn’t include much of that, because I simply couldn’t get past the samurai general, an enemy who amounts to essentially a mid-boss in the game. Initially, I found it frustrating to try and die and try to beat the general. But over my attempts, I started to learn its attacks and how best to defeat it. With maybe 30 minutes to play the demo, I wasn’t able to finally conquer the enemy, but I found the process more compelling than aggravating.

Initially, I thought perhaps the game was simply ratcheted up to be incredibly hard, but the reality was far more intriguing, “Sekiro” expects players to adapt not just to the rhythm of a major enemy’s attacks, but to focus on that core concept of a single (or double in this case) deadly blow.

Much like a fighting game, the best of which are based on the core elements of distance, timing, and focus found in most martial arts, “Sekiro” turns the typical button-mashing hack-and-slash of an action game into a more strategic affair. Forcing players to slow down, respect the danger of their foe and then lash out at the right moment to kill.

I found that 30 minutes simply wasn’t long enough to learn the movements of the game, because winning in “Sekiro” feels like it will require the sort of controller understanding that makes movements, defense, and attack second nature.