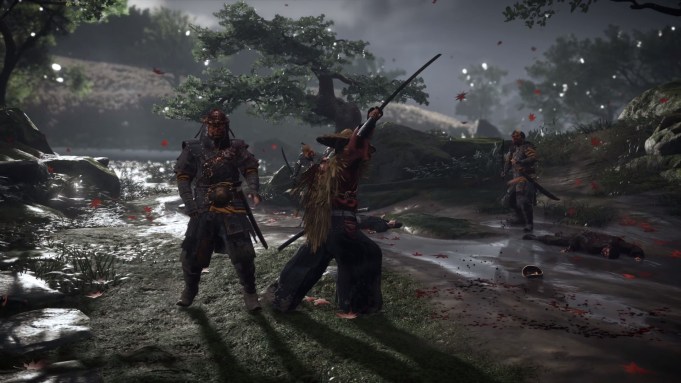 The opening segment of Sucker Punch’s new adventure “Ghost of Tsushima” shows Jin Sakai, the games protagonist, slowly walking up a hill as a Mongol invasion drives the small Japanese island into disarray. But before we had any time to dissect the magnitude of the situation Jin reaches the top of the hill and is greeted with a view of the horizon that’s both beautiful and unsettling. The gorgeous landscape is marred by fires, destruction, and the sounds of war.

“We built this entire segment around this view,” Sucker Punch’s Nate Fox tells Variety. “It’s meant to illustrate how huge this world we’re creating is, we want players to got lost in our version of feudal Japan. People will be able to explore the island of Tsushima through their own volition.”

“Ghost of Tsushima,” revealed at last years Paris Games Week, is another open world, single-player adventure from the creators of “inFamous” and “Sly Cooper” although it’s unlike any of their previous projects. “We don’t have any branching narratives here, it’s a story we’re trying to tell directly,” Fox said.

Fox made it clear that the story their telling in “Ghosts of Tsushima,” while rooted in real history, is a complete work of fiction. We won’t be exploring a “brick for brick” recreation of the country and historical time period but it will explore themes that are based around the Mongol invasion of Japan in 1274.

“We picked this historical period because of it provides a great conflict that’s easy for people to immediately conceptualize,” Fox said. “The fantasy is that you’re a samurai, the conflict is this foreign invasion, and the stakes were very real. The Mongols were the most advanced military in the world at that point, the Japanese had never seen gunpowder, bombs, or rockets.”

In order to combat the invading army Jin, also known as “The Ghost,” will have to resort to unconventional warfare including Ninja techniques that were hinted at in the first trailer last year. While Fox wasn’t ready to jump into details about the combat, he did liken the intense standoffs found in the E3 footage to Akira Kurosawa films like “Seven Samurai” and “Sanjuro.”

Even though “Ghosts of Tsushima” is a very different experience the electric adventure in “InFamous,” some DNA from that open world made it into the Jin’s traversal mechanics. “The ability to climb fences and use grappling hooks as shown off in the demo is a powerful promise about the navigational freedom we’re trying to achieve,” Fox said. “We create games with a lot of navigational empowerment at Sucker Punch and we’re still figuring out how to carry that forward here.”

While elements from previous Sucker Punch games will undoubtedly make their way into this new adventure, the development team is going for a more direct take on narrative storytelling this time around. There will be no branching paths in the game, every side and main quest-line will end in the same way. “That mission shown with Jin facing off against the woman will always end with him trying to get her to focus back on the Mongols,” Fox said. “This is a story about real people trying to survive in the brutality of this invasion, so we’re trying to tell that through a fixed-narrative, We even look at the side quests as an anthology.”

Fox took extra time to remind us that this would be a fictional departure from the historical events from the actual invasion that happened almost 800 years ago. But they still tapped cultural experts, took trips to Japan for research, and worked with Sony closely on getting the depiction of Japan right.

“History is incredibly important as context for the game, but we’re not trying to reproduce it,” Fox said. “In fact, the original invasion was foiled by a kamikaze, the Mongol boats were sunk by a hurricane. Our hero isn’t a hurricane, he’s a man, and we actually acknowledge that change with his sword that’s engraved with storm wind designs.”