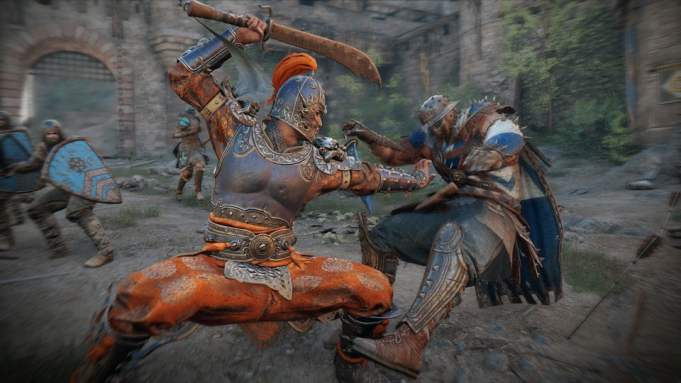 “For Honor’s” Marching Fire release is the best thing to happen to the history-remixing melee brawl ever since it first released back in February of last year. The release is split into two similarly named (and a bit confusing) pieces of content: the Marching Fire Update and the Marching Fire Expansion. While the actual expansion itself only contains the new AI enemy-focused Arcade mode and Early Access to the new Wu Lin clan of heroes, the free update for all players adds in a bevy of graphical improvements, a brand new gear/perk system, and the wonderfully chaotic Breach mode.

The Marching Fire Expansion adds in four more heroes to the mix that hail from the China-themed Wu Lin clan. There’s the single-sword wielding Tiandi, a Vanguard hero that mixes up strong frontal assaults with shifty dodge-based attacks; a polearm carrying Jiang Jun, a Heavy hero that packs a ton of damage at the expense of speed; the dual hook sword armed Nuxia, an Assassin hero that can quickly get in and out of range and stay agile; and the staff-wielding Shaolin, a Hybrid warrior monk hero that can shift his monkey-like fighting style to charge up powerful reaction attacks. On October 30th, all players will be able to unlock the new Wu Lin faction using 15,000 steel (in-game currency).

All four of the new heroes bring something unique to the table, but Tiandi and Nuxia are real standouts. Tiandi is the easiest to pick up and play with quickly if you’re looking for something fresh due to his simple chain attacks and ability to attack while dodging. It’s fairly easy to bait opponents into attacking, dodge to the side, and strike swiftly. He’s got enough defense to stand up to some big hits and can do some real damage in group fights, making him a great choice for the new Breach mode. With Nuxia, you can do similar flourishes, but she can also cancel her heavy attacks into a guard-breaking assault that’s extremely useful against shielded opponents. If you’re looking for a dueling specialist, Nuxia is definitely the standout of the new bunch. It’s a shame that the Wu Lin clan don’t have any new Story mode content to go with their inclusion, because the lore seems ripe for exploring.

Rounding out the paid offering as part of the Marching Fire expansion is an all-new player-versus-environment (PvE) Arcade mode. This mode is for single player or co-op only as you fight against a series of AI-controlled enemies. It’s a simple game mode without the frills and window-dressing of other content to try and force a story where there isn’t one. All that happens is you queue up for Quests and take on four rounds of enemies. Each round has random modifiers based on difficulty level, such as your opponent regenerating health or you slowly losing health throughout the entire fight. This is really just a good way to focus on grinding out levels and getting loot quickly rather than having to sit through multiplayer queues and load times.

Now the gear/perk system’s overhaul might be the least-sexy change, it potentially has the biggest impact on the game as a whole. Prior to Marching Fire, all pieces of gear (such as helmets, chest pieces, weapon hilts, etc) all had individual stats that contributed to your effectiveness in battle. With this update, everything is now perk-based. So for example, now you need to equip items that contribute to overall perks, such as increased damage percentage, rather than just picking whatever has the highest stat.

The biggest and perhaps best piece of new content from Marching Fire is actually free to all players regardless of whether you buy the expansion or not and that’s the PvP-focused Breach mode. Breach is a bit like a variation on existing objective-based multiplayer modes, such as Dominion. What sets Breach apart though is the sense of scale. In the new mode, players are split into teams of attackers and defenders. The attackers must escort a battering ram up to the gates of a fortress and use it to break through into a castle and take out the super-powered Commander NPC, while the defenders have to stop them. It’s reminiscent of the large-scale objective-based modes in “Chivalry: Medieval Warfare”. You can win as a defender if you destroy the ram, run out the clock, or deplete the attackers of all their respawns by killing them enough times.

Thankfully that’s not all there is to the new Breach mode. In addition to the main objectives, there are secondary ones as well, such as side bosses that grant powerful buffs when killed, walls that can be armed with archers to fend off incoming players, and more. With three different maps dedicated to the Breach mode, there is a lot more variety than usual for a brand new piece of content. Because of the importance of focusing on moving the frontline and pushing forward or holding your ground, the team dynamics really flourish and feel far more intense than in standard deathmatch-style game modes like Brawl.

Since the new Wu Lin clan can be accessed later this month with in-game currency the $30 price tag is a hard-sell for just an Arcade mode since the excellent Breach mode is already included for free. But all-in-all “For Honor” has come a long way since its initial launch and Marching Fire as a whole feels a bit like a victory lap for Ubisoft.