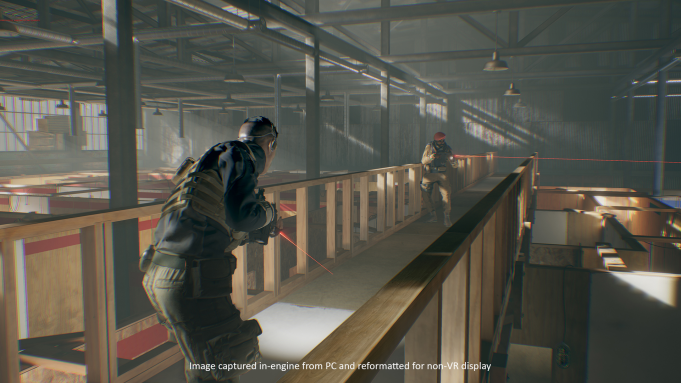 First Contact Entertainment had one goal when developing “Firewall Zero Hour” for the PlayStation VR: To make a fun, multiplayer first-person shooter in virtual reality.

And, at least played as a communicating group, it seems they’ve succeeded.

“Firewall Zero Hour” is a team-based, tactical multiplayer shooter that takes eight players, splits them into defenders and attackers and unleashes them on a small map. The game feels a bit like an old Rainbow Six title or perhaps SOCOM, both stripped of some of the nuance and in-game tactical briefings.

One group sets up around a briefcase, dropping a few defensive items like mines, while the other group streams through the maze-like halls of the map trying to take down the defenders so they can grab and hack the briefcase.

While the game offers several movement options, I found even playing with total control over movement using a thumb stick didn’t make me feel nauseous, one of the key problems that First Contact was aiming to solve in developing the game.

Adam Orth, creative strategist at the studio, told Variety that the team was pondering what to do next after creating “Walking Dead” and “John Wick” VR games.

“We just wanted to solve the VR problems of locomotion, multiplayer and comfort,” he said. “The team has a really, very strong FPS lineage. So we looked at the landscape and said these are the things we want to solve, this is what is missing.

“There just wasn’t a good tactical multiplayer shooter on PSVR so we decided to go for that.”

Orth said the team made a prototype and were having so much fun playing it, they decided to turn it into a game.

“Firewall” can be played with either the gun-like Aim controller or a standard PlayStation 4 Dualshock 4 controller, both make use of motion tracking, so aiming is more about eye-hand coordination than it is the nimbleness of your thumbs.

I played several matches of the game with a group of players in the room with me and some located back in the studio. The matches were fast, fun and tactical. Success, when we had it, was almost entirely powered by our communication: calling out where we were or where we spotted enemies. Located together and playing with the developers, there was plenty of communication, though a lack of that vital communication, once the game is widely available, seems both likely and something that could easily reduce the game to bullet-spraying bloodbaths free of tactics and fun.

While there is no firm release date, other than this year, Orth said the game is nearing completion. It will launch with nine maps from three locations and include a dozen customizable contractors. Each of the hired killers has their own weapons build-out and special skills. You can also upgrade the characters by unlocking new skills, giving them a “full player progression,” Orth said.

Beyond the characters, the game will also have tons of other unlockables including weapons and visual customization. While “Firewall,” will have microtransactions that can be used to purchase cosmetic items, there won’t be anything purchasable that gives players an advantage in the game, Orth said.

Although designed for four versus four multiplayer, the game will also support playing solo against AI-controlled enemies and playing cooperative against those same enemies, he said. There won’t be any single-player campaign though.

“We are concentrating on this mode right now,” Orth said. “We want to provide a super solid experience and we don’t want to segregate the players.”

He added that the team does have plans for a lot of post-launch support for the game through downloadable content.

For Orth, who last created a game free of gunplay or guns based on his personal experiences with online harassment, getting back to more traditional game design has been fun.

“For me, the first Rainbow Six old-school game is my favorite multiplayer experience,” he said. “It’s been fun getting back to those roots and then introducing the advances of modern gameplay.”