Playing ‘Fallout 76:’ the Good, the Better, the Radiated 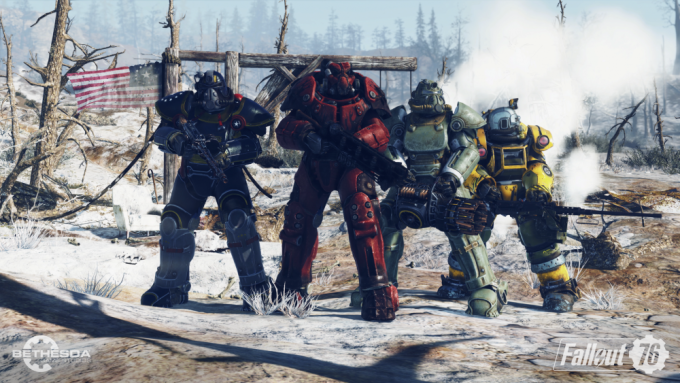 “Fallout 76,” or at least my first time playing the upcoming online multiplayer title from Bethesda Softworks, ended with a bang, a glow, and a slow crawl to death.

Three hours into my rambling, shooting, building, somehow not dying, time with Bethesda’s spectacular game I stood on the lower viewing deck of the Greenbrier in West Virginia with a band of compatriots and our guide looking up at the sky and waiting.

“There it is,” someone shouted.

Above I could see something falling through the clouds heading for the rocky hillside far below. It plummeted to the ground, obscured in the last few seconds by trees and distance, and then, after a pregnant pause, there was a mighty flash of light, a roar and the baby blue sky turned white, waves of heat roiling through the trees in front of us.

The roar continued as the white light slowly gave way to a sickly yellow, in the distance a shape slowly came into focus, a massive column of smoke rising into a familiar, frightening mushroom head. Below, closer to our viewing area, everything took on a muddled red tinge.

With just seconds left before our time with the game came to an end, I ran down the hill, over a fence, and through the trees into the thick of fresh radiation. The sound of a climbing, urgent Geiger counter filled my headphones until my character — a rough creation meant to look a bit like me, decked out in trendy blue jeans, a jacket, and a captains hat — collapsed to his hands and knees, dying from radiation poisoning. On the screen, a message popped up from Fallout’s colorful Vault Boy warning me that nuclear blast zones are full of radiation and dangerous weather. I would need to equip a hazmat suit, gas mask, or power armor to prevent radiation, mutations, and disease.

All around me I could see players running into the sickly pink air of the radiation zone, dropping to their knees to crawl in digital misery before slipping away into their next life. A Vault Boy icon, meant to represent my current condition quickly transformed from smiling to a grimace, his eyes glowing blue, hair missing in clumps.

Finally, the air around me a golden glow, my final moments seen only in silhouette, I died.

Emil Pagliarulo, design director for “Fallout 76,” know’s people have been waiting for the sequel to “Fallout 4,” for years. And he wants everyone to be clear that this online only, multiplayer game isn’t it. That doesn’t mean “Fallout 76” won’t have a story to tell, just that it will tell it in a different way and that this particular story takes place well before the events of games like “Fallout 4,” in the year 2102, just twenty-five years after the war between the United States and China ended in nuclear holocaust.

Story “is no less important in this game, it’s just told differently,” he said. “You’ll get the story from robots, holotapes, and notes.”

The less intrusive form of storytelling will even have its own tab on the player’s wrist-worn Pip-Boy, he said.

“This is the first time we’ve ever set a game so close to the bombs being dropped,” he said. “We’ve never been able to tell the stories of the people who survived before. So there are stories, little and big, all over the place. That’s what we wanted.”

An anchor to this story is the Overseer of Vault 76, who leaves the safety of the vault well before players make their way into the fresh wastelands.

“We wanted to tell the story of the Overseer and her arc,” Pagliarulo said. “She grew up in this area and you get to listen to her story and hear how the changes to the world affects her personally.”

The game takes place in a wide-swathe of recreated West Virginia. The area in which we played was close to the confines of the real-world historic Greenbriar, a famed resort established in 1778  that houses a massive underground bunker once meant to serve as a vault of its own for the U.S. Congress in the case of a nuclear strike. The bunker still exists, in the day before the game demo and interviews at the real-world Greenbriar, journalists and developers gathered in the real bunker to eat dinner, listen to music and take photos with a Vault Boy mascot.

The recreation of the Greenbriar in the game is so unnervingly spot-on, that most players last week rushed to the very room in which we all sat, to see if the in-game version might feature the skeletons of long-dead, gameplaying journalists. But the room was locked in the game, as was access to the bunker. Several developers, though, hinted that the bunker plays a pivotal role in “Fallout 76.”

The demo started with the opening of the game. Players awaken in Vault 76 the morning after a raging “reclamation day” party and are asked to build out the look of their character and then led through the hallways of the vault to pick up a handful of items as they make their way into the wild.

Bethesda developers were very mindful of creating a game that balances the freedom to do what you want with the need to limit harassment and trolling in the game. Their solution to, for instance, a band of hostile players hanging out near the exit to the vault to pick off new players, is a curious “murder” system.

While any player can attack any other player, if the attacked player doesn’t attack back, the damage of the antagonists’ attacks are massively reduced, making it much harder to kill someone who isn’t actively participating in the player-versus-player combat. If a player manages to kill someone who isn’t attacking back, they’re labeled a murder, lost the ability to see anyone else on their map and become the subject of essentially a hunt by everyone on the server.

The game also prevents anyone under level five from engaging in any sort of player-versus-player combat. By that time, leveling up has allowed players to select perks — powerful cards that grant passive abilities — and increase their basic skills.

“We found in this dynamic that murdering is so rare it becomes an interesting in-game event,” said “Fallout 76” development director Chris Mayer. “When someone gets the wanted symbol they become content for everyone. And if you want PVP, there are plenty of ways that doesn’t involve murder.”

Deep into our three hours of time with the game, loaded up with modified weapons, armor and sporting jaunty hats, our band of players finally made our way to The Greenbriar, only to find that it had become a sort of mecca for everyone on our server. Our visit to the Whitespring Golf Club quickly devolved into rolling combat between bands of players, trying to kill one another without accidentally hitting one of the many, heavily armed robots, setting it off into an unstoppable murderous rampage.

Because we were all relatively low-level characters, five to nine or so, combat was slow and methodical. Carefully aiming single-shot guns, hoping to make the best use of what few bullets we had, sometimes resorting to machete or ax. Players are initially downed, giving them time to be revived by a teammate, before they bleed out or are killed by a ruthless player.

Once killed, a player can choose to revive at a camp or the vault or to come back in the midst of combat to seek revenge.

Our team managed to take down two or three others with little or no losses, a high-level, power-suited developer player stood by, quietly watching the mayhem as we cleared the mansion’s grounds.

Once free of other players, we explored the eerily familiar location, picking up items and talking with some of the robots there to collect bags, greet visitors or sell items at a few of the in-hotel shops.

A developer said that for the demo they had blocked off the additional floors of the hotel and access to the bunker.

The inclusion of The Greenbriar in the game came after developers scouting the state visited the site and read up on its history.

“They drove around to cool landmarks and locations, dug into the lore,” project lead Jeff Gardiner said. “They spent a week or more out here and The Greenbriar is a place you come to and it leaves an impression.”

While player-versus-player combat in “Fallout 76” is engaging and fun, it wasn’t the biggest draw to the game, nor its biggest threat.

The world of “Fallout 76” is a dangerous place requiring players to keep an eye on their hunger, their thirst, their radiation level, all while completing small tasks, hunting down resources, and building out their own unique camps.

The building aspect of the game — which allows you to construct your own base camp complete with defensive turrets, buildings, and crafting locations for weapons, armor, chemicals, food, and the like — plays a major role in “Fallout 76” both as an incentive to explore and loot, but also as its own sort of gameplay.

Building is powerful and fast in the game, letting players do things like quickly save blueprints for a design that can them be essentially rubber-stamped over and over again to speed up the process. For instance, I created a small three-walled-room, dropped in a campfire for cooking, and added floors all around it with turrets on them. Once saved, I could — given the necessary resources — simply drop that same build over and over again in my camp with the push of a button.

The entire camp can also be stored away and taken with you, so moving camp between locations on the map is as easy as walking to where you want to place it.

These player camps are an important strategic part of the game, because, while the game doesn’t have any non-player characters, it is absolutely packed with dangerous enemies from flying radiated mosquitos to Fallout’s take on the zombie to much larger and frightening enemies that need cooperation or a high-level character to take down.

In our time wandering the wasteland, we mostly survived as a group of players willing to work together to heal downed teammates, share needed loot and point out dangers. Taking the game on alone, though, would likely be a much different experience, fraught with danger.

Our time with the game wrapped up with a developer-launched nuke, just to give us a sense of what it looks like when the map is suddenly, dramatically reshaped by a single action. But, Gardiner was quick to point out that the act of getting the codes needed to launch a nuke is a “difficult, team-focused process.”

It’s not something that will happen in the early days of the game.

Mayer called the use of a nuke a game-changing experience.

“As you get high level, get the nuke code and set it off, it changes the area into a much higher level area,” he said. “We see that as a repeatable new content loop.”

Gardiner said that the game also has high-level creatures like the scorch beasts and even a unique “endgame scenario” involving them. And of course, the team isn’t done working on the title, not by a longshot.

“We’re going to be supporting this game for years,” Gardiner said. “There are already something like 70,000 different (weapon and armor) modifications and recipes in the game.”

The game’s beta starts off later this month, and whatever players do in it (barring some major game-breaking catastrophy) will be saved for the launch of the title. And while Pagliarulo feels, knows that “Fallout 76” is the game the team knew it could create, he still worries how some players will react to it.