There’s a Bomb in Your Heart Set to Explode in 18 Minutes, Have Fun 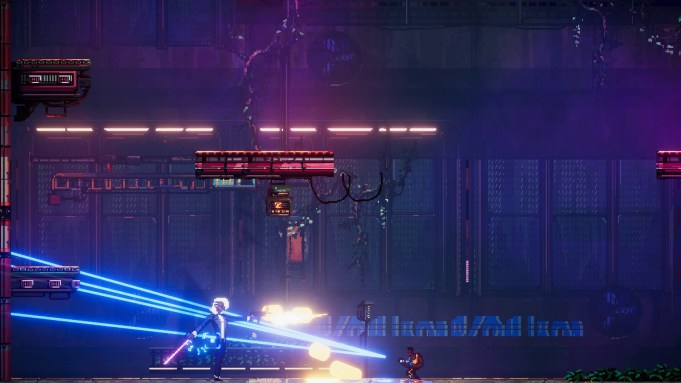 In a leather booth, upstairs in a dingy bar, surrounded by smattering of other indie games across the street from the E3 main show, Superscarysnakes developer Don Bellenger runs me through all the systems in his side-scrolling roguelike, “Black Future ’88.”

There is a crucial split-second dash that lets your sprite through walls, there are shopkeepers who sell power-ups, but some of them are classified as “drugs,” and if you take them too often your character will become addicted which has all sorts of gameplay ramifications. There are “curse” buffs, which are extremely bad deals, but they might be necessary in extremely specific circumstances. The bosses you encounter are randomly sorted, but are all named after classic synthesizers. When you kill one, you’ll be able to choose an upgrade for your dash that is absolutely crucial to making it to the late game. Oh, and the whole game takes place over the course of 18 minutes. Did I mention that? Yeah, there’s a bomb in your heart, and it’s about to blow, so you don’t have much time to spare.

“I just wanted people to play the game the way I play it. It’s not going to affect new players, it’s not going to affect intermediate players, but it’s going to push people who are really looking to truly beat the game,” says Bellenger, when I ask him how he came up with the idea for a time limit. “It gives them that urgency. It forces them to play recklessly and make decisions very quickly.”

All together, this makes “Black Future ’88” an exacting 2D shooter, but none of those esoteric game-design tenets should distract from its true calling card; the game is absolutely gorgeous. Dripping with a heavy, violent synthpunk veneer – the artificial ’80s that kids born in the ’90s dream about – it’s almost difficult to process when you see it in person. Your gunfire, which is controlled in the typical dual-joystick way, flashes across the screen like neon darts. Your enemies are all studded, mohawked synthoids and androids, or floating turrets in candy-coated paint jobs. The music, which is entirely written and performed by Bellenger, is directly inspired by Carpenter Brut and Kavinsky, and is equipped with the violent heft that injects the intensity of the gameplay with a welcome, propulsive drama. By definition, synthwave is about creating dingy, broken universes that you still kinda want to live inside, and”‘Black Future ’88” has that in spades. Dangerous, anxious, bloody, and responsible for the best night of your life.

Of course, this isn’t the first time a developer has modeled their world after “Drive,” and Kavinsky, and old “Terminator 2” posters. “Hotline Miami” comes to mind, as does “Furi” and ‘”Far Cry 3: Blood Dragon.” Bellenger is aware that he’s not the only person participating in this movement, but he’s also confident that the specific flavor he’s interested in is unique when compared to the field. “I think [synthwave] is really popular because it’s a familiar but very new style. The last time you saw that is when hip-hop blew up and hit the mainstream,” he explains. “I think [my game] is less posh, and more dirty, more on the “Robocop 2″ side of things, and I think that’s a new take.”

Still, if you were prepared to write off “Black Future ’88” as a series of pretty screenshots that will look great on Steam and not inspire much else, I promise you that’s not the case. After 20 minutes with the game, it’s clear that Bellenger’s is chasing after a truly robust design with the legs of “Spelunkey” or “Bindings of Isaac” – a piece of software with a depth worthy of soaking up hours and endless forum conversations, the games that make a certain niche of players feel seen. Bellenger, of course, knows firsthand the currency that comes when you polish your product to a mirror shine.

“I’m a dad, so the games I used to play I don’t play anymore. Now I play are short-session roguelikes,” he says. “I knew I was going to spend a couple years working on a game, so I wanted it to be something I was really passionate about. It speaks to things I love, and things I want to get better at.”