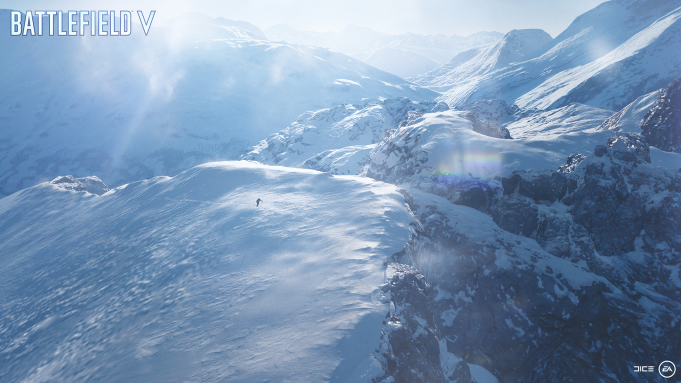 As the steady rise of battle royale and online multiplayer video games continue, one thing lost in the mix is the context of war. Stripped of even basic rationale, boiled down to a singular gameplay loop of shoot, die, repeat,  the impetus for war, the cost of battle is sanded away to smooth the experience of play.

This year’s “Call of Duty: Black Ops IV,” which once offered some of the most significant video game explorations of war, fielty, and martial morality, completely did away with story-telling, making way instead for game loops of death and zombies.

“Battlefield V” isn’t making that mistake. Though the game doesn’t have a full-blown campaign, it does return to the War Stories made popular in “Battlefield 1.” These playable vignettes drop players into combat stories around the battlefields’ of war, giving the developers a chance to create something more multi-faceted, and hopefully more compelling than a singular story might allow.

In “Battlefield V,” developers EA DICE offer up three stand-alone stories at the game’s launch and a fourth after the game hits. The stories have players take on the role of a resistance fighter in Norway, a British commando in North African, a Colonial soldier in the South of France, and a German tank commander struggling with the ideology of his country. Each of the stories is told in the native language of the setting and characters, with subtitles, an approach that the developers believe allowed for more heartfelt performances.

“These War Stories are not about Hitler, not about storming Berlin. We won’t be storming Normandy Beach or fighting in the Battle of the Bulge. They are about one person in one corner of the war,” said Eric Holmes, single-player design director at EA Dice. “It’s about the scenario they find themselves in and why that’s important to them.”

Because the stories are self-contained, the writers have much more freedom in how they deliver their tales.

“There is a lot of narrative freedom in smaller bit stories,” he said. “We can kill a protagonist or put them in mortal danger. That’s very liberating and exciting.”

It also allows the team to be more nuanced in the message or messages they decide to deliver through those stories.

“These are human stories set against an epic war,” he said. “I think there is an anti-war message generally in our stuff because we explore the humanity of war rather than the coolness or machines or awesomeness of war.”

The game opens, as with “Battlefield 1,” with a prologue that zips players through a number of scenarios set across a broad swath of WWII. It feels almost like a playable trailer designed to give everybody a taste of the single-player built into a game often more known for its multiplayer gameplay.

“Everyone, even people who don’t play single-player, have to play the prologue,” Holmes said.

From there, players can decide to play any of the War Stories, in any order, or skip them all together and just go into multiplayer. But Holmes believes that the single-player adds weight to the game as a whole and the experience of playing later with friends, free of narrative.

“There is a need for context that’s not just multiplayer (kill-death ratios) and I’m doing OK, let’s go at it again,” he said. “There should be more to the experience then sixty-minute guitar solos.”

What those War Stories give the game is a level of emotional experience and value, Holmes said. “The texture of the world. I’m a big fan of the Battlefield series, but the one I connected least with was ‘2142’ because I didn’t know the weapons or who we were fighting for. I didn’t know anything.

“We can provide a lot of texture, a lot of nuance and principals and feeling for that world.”

Over the course of about two hours, I played through the prologue and the three launch War Stories, each provided a unique perspective on the war, a different tone, and different settings and characters.

While some felt like brief snapshots, moments in a world war, Nordlys offered the most impactful perspective. In it, players take on the role of a young woman in Norway, fighting to prevent German research that could turn the tides of war.

The game’s story is meaningful, emotional, and compelling, examining themes of family and sacrifice. The gameplay is also unique, allowing players freedom in choosing how they go about their missions, whether it is blasting through soldiers, or slipping past guards. The game also includes chunks of play on skis, as you crisscross the frozen countryside, sometimes avoiding, sometimes fighting enemy Germans.

Under No Flag is meant to be a sort of jovial, Guy Ritchie take on Battlefield’s War Stories. While it hits that note, the dialog is so brief, and storytelling so light, it’s mostly forgettable. In it, players have to blow up some planes. The gameplay, too, felt generally unremarkable.

Finally, Tirailleur, set in 1944’s Provence, France, is designed around France’s “forgotten front,” and meant to tell the sort of the roughly 200,000 Colonial soldiers who fight for France but were mostly erased from history. It’s a big, sweeping war story of infantry action and full-blown combat. The gameplay is compelling, but the story doesn’t do the setting or its characters justice, missing the right balance of play and narrative found in Nordlys.

I didn’t have a chance to play The Last Tiger, which sounds like the most compelling of the War Stories, both in terms of its gameplay, which has you commanding one of the infamous Tiger tanks as Peter Mueller, and story, which is meant to strike a “Das Boat” meets “Black Hawk Down” vibe.

“We’re dealing with Germans here so we handled it like notroglycerian,” Holmes said.

This is the second time EA Dice discussed creating a War Story told from the perspective of a German, he said.

“We decided during ‘Battlefield 1’ that we wanted one in there,” he said. “For a longtime we had that intention.”

The story was going to combine the French, the Harlem Hellfighters and the Germans in a story where all three are “tussling over one town,” but that became the game’s prologue and the German-focused story was never told.

“We were called out about that,” Holmes said. “That there should have been a German story in there. Then we wanted to put one in this game. We knew it was contentious. When you tell people that there is a German story, they immediatly tell you what they think it will be.”

But, Holmes said, it’s focus, the story’s touchstone is “Das Boat.” In it, the player is amid a tank crew with wildly different perspectives on the war and why they are fighting it.

“One of the main themes we’re are exploring is what do people think of what this war is and how we go here, and the tank crew disagrees,” he said. “They are surrounded by the results of what their country and army has done and why they are there.”

Mueller, Holmes added, is “emphatically” not a Nazi.

The Last Tiger will be released sometime after “Battlefield V” is released, though Holmes couldn’t say when.

It also sounds like the game will go other post-release support, though Holmes declined to detail what it will be. Instead, he focused on what players will get the day EA Dice’s game goes live.

“These are challenging stories,” he said. “These are diverse stories. These are untold stories.”