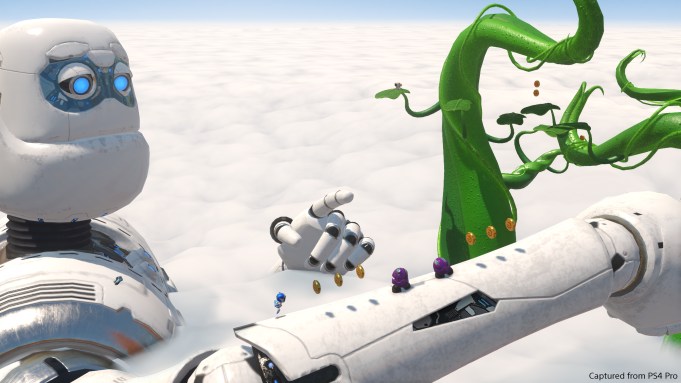 He may not be a mustachioed former plumber, but Astro Bot feels like he’s delivering the same inquisitive playfulness wrapped up in an innovative platform that has for so long been Super Mario’s literal stomping ground.

In “Astro Bot Rescue Mission,” players take control of the diminutive, big-headed bot from “Playroom VR’s” “Robot Rescue” as gamers lead him through 20 virtual reality levels spread across five planets on the hunt for more than 200 lost bots.

The standalone game was developed by the Asobi team at Japan Studio and comes in response to the overwhelmingly positive response to “Robot Rescue.”

Nicolas Doucet, creative director on the game, calls that free 2016 mini-game for the PlayStation VR a primitive prototype for what has now become “Astro Bot Rescue Mission.”

“We wanted to make that at the time because we thought it was a cool thing to try,” he told Variety during a recent event for the game. “Because [“Robot Rescue”] was the most popular minigame in “PlayRoom,” we wanted to make a full game.”

The demo dropped me into the center of a cartoon virtual reality world as I maneuvered Astro across brightly colored girders. At times I had to lean forward or back or even twist in my seat, to see everything that was going on around me. The sense of immersion, while powerful, was almost secondary to the simple fun of running Astro around the level, punching out enemies, hopping up and down the screens platforms and avoiding dangers and drops with the controller. There were also moments when I had to headbutt a wall to move it out of the way of Astro or use the controller to shoot switches or slingshot the robot across the screen. As you play, you can unlock five different gadgets for the controller including a grappling hook, water cannon, slingshot and the ability to throw shuriken.

After completing the demo’s imaginative two levels, Astro took on the boss of the planet: a giant gorilla that looks suspiciously like the star of some Nintendo games.

The game’s quirky level design and clever incorporation of virtual reality felt reminiscent of “Super Mario 3D Land” for Nintendo’s 3DS, a game seemingly designed by Nintendo to showcase the power of glasses-free 3D on its portable.

The notion goes back to the premise of “Playroom VR” and “Robot Rescue,” Doucet said.

“We were using the technology to make a showcase for PSVR,” he said. “We decided to make a platformer but not just in a panoramic view, it needed perspective, verticality, with things all around.”

The team also worked to make sure that game made use of proximity, specifically using that technique to bring the player close to Astro and look directly into his robot face.

“You get some really endearing moments with the main character because of that,” he said. “Those kind of things don’t happen with a normal game where you are always looking at the game through a window.”

When it came to taking that free prototype and turning it into a game, the team was inspired by a slew of titles, including “Super Mario 3D Land,” Doucet said.

“We were inspired by ‘3D Land,’ of course,” he said. “But there is 30 years of history, especially for platform games. We have ‘Crash Bandicoot,’ and ‘Ratchet,’ and ‘LittleBigPlanet.’ ‘3D Land’ was an interesting case study because it was a company trying to showcase a technology; in that case 3D.”

The game, which doesn’t yet have a release date, features 20 levels spread across five planets. Each of those planets also has a boss that has to be taken down to proceed. The game also includes a sixth and final boss.

“This is the main story,” Doucet said. “In each level you have eight crew members to rescue. You don’t need to rescue them all, but you need to rescue some to go to the next level.

The game also has 26 extra challenge stages which are each unlocked by finding a “hidden space chameleon” on a stage. As you play through the game, players will collect coins which can be used in a crane game to grab items that are then used to create an interactive diorama.

Doucet said that those challenge stages are completely unique levels that “take one mechanic and build upon it.” The stages are either score or time attacks. “They’re for really hardcore gamers,” he said.

As for the future of the blossoming franchise, he said that the future of Astro very much depends on how well this new game is received.

“There are so many things you can do with VR,” he said. “Our tagline for the game is ‘A new hero is coming to PSVR.’ We’re really pushing this guy, we want him to be emblematic.”

And so far, at least during press events, the game has been very well received.

“We have had some really great reactions because it taps into a genre that we are all used to, it has this notagie as well as the technology,” Doucet said. “It’s new and classic.”