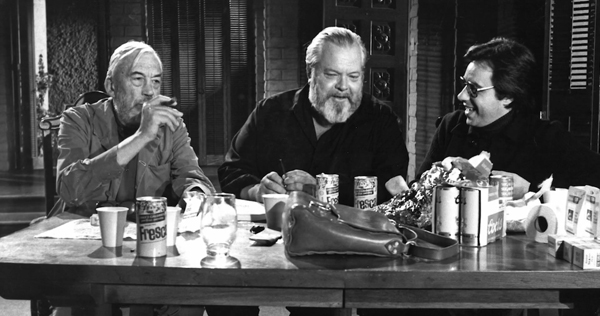 Netflix has released a chaotic trailer for Orson Welles’ unfinished final film “The Other Side of the Wind,” just before its premiere Thursday at the Venice Film Festival.

John Huston stars as a high-profile Hollywood director making a comeback, much like Welles was attempting. The trailer mixes black-and-white and color footage, and two other filmmakers of the era — Peter Bogdanovich and Dennis Hopper — appear as characters.

Several characters in the trailer offer brutal assessments of Huston’s character, saying, “What he creates, he has to wreck. It’s a compulsion,” and, “He’s just making it up as he goes along.”

Welles shot the film-within-a-film between 1970 and 1976, and then worked on it until his death in 1985, leaving behind a 45-minute work print that he had smuggled out of France. Huston portrayed a temperamental film director battling with Hollywood executives to finish a movie — just like Welles did throughout his career.

Netflix acquired global rights last year to “The Other Side of the Wind” and is financing the completion of the movie. The film was shot by Welles from a screenplay he co-wrote with Oja Kodar. It also stars Kodar, Robert Random, Lilli Palmer, Edmond O’Brien, Cameron Mitchell, Mercedes McCambridge, Susan Strasberg, Norman Foster, and Paul Stewart.

Producer Frank Marshall, who served as a production manager on the original production and has led efforts to complete this film for more than 40 years,  oversaw completion of the film with consultation from Bogdanovich.

The character portrayed by Huston originated from an encounter between Ernest Hemingway and Welles in 1937 — four years before the release of “Citizen Kane” — in which a whiskey-drinking Hemingway threw a chair at Welles. Welles decided to use Hemingway as the primary model for Huston’s character.

Royal Road negotiated in 2014 for film rights with Welles’ collaborator, Kodar; his daughter and sole heir, Beatrice Welles; and Iranian-French production company, L’Astrophore. Welles had financed the project through a combination of TV roles and investors, including Mehdi Bushehri, brother-in-law of the shah of Iran and an investor in L’Astrophore. As a result of clashing with Welles, Bushehri took control of more than 1,000 negative reels, which were stored in a Paris warehouse.

Netflix is releasing “The Other Side of the Wind” in theaters and on its streaming service Nov. 2. Watch the trailer above.