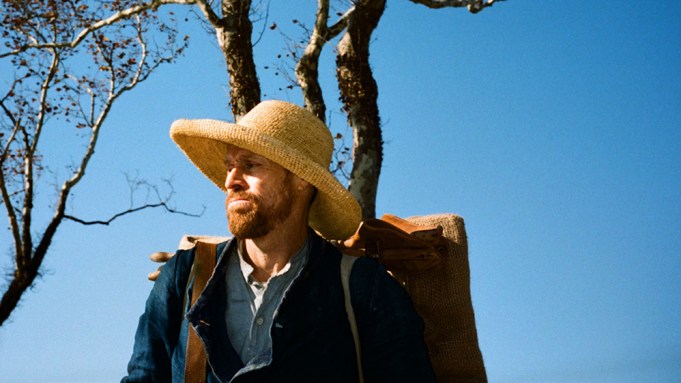 The trailer begins with a priest, played by Mads Mikkelsen, questioning van Gogh about why he has become a painter.

“Because I can’t do anything else and believe me, I’ve tried,” van Gogh replies in a voiceover.

The film, which is named after one of van Gogh’s paintings depicting an old man with his face in his hands, follows the last days of van Gogh, and chronicles both his breakthroughs in painting as well as his time spent in an asylum.

“I’ve spent all my life alone in a room,” van Gogh says in the trailer. “I’d like to find a new light, for paintings that we haven’t yet seen.”

The trailer also indicates that some of the scenes portray the way van Gogh saw the world, with yellow or blue washes across shots.

Variety‘s Owen Gleiberman praised the film, which premiered at the Venice Film Festival, writing that it “channels the light — the evanescent glow of van Gogh’s painting and being — as if it were lightning in a bottle.”

Oscar Isaac also stars as van Gogh’s friend Paul Gauguin, along with Rupert Friend as van Gogh’s brother Theo. “The Diving Bell and the Butterfly” helmer Julian Schnabel directed the film from a screenplay by himself, Jean-Claude Carrière and Louise Kugelberg.