Anna Paquin on Indie Film: You Don’t Do It for Fame, Finance or Glory 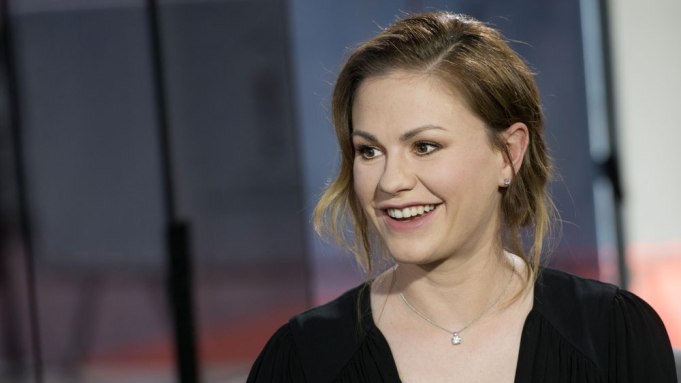 Sitting down with Variety’s chief film critic Peter Debruge, Paquin discussed the release of her newest independent movie at the Karlovy Vary Film Festival in the Czech Republic. The drama was written by and also stars Denis O’Hare, Paquin’s former co-star on “True Blood,” while Stephen Moyer, Paquin’s husband and “True Blood” love interest, makes his directorial debut on the feature. The trio also have a production company together.

“One of the things that Denis and Steve were playing with is the idea of memories being unreliable,” Paquin said.

Featuring an ensemble cast that also includes Rhys Ifans, Melissa Leo, Cynthia Nixon, and Ed Asner, “The Parting Glass” revolves around a “family coming together in the wake of the suicide of one of the siblings,” Paquin explained. “It is a pretty challenging and quite dark, but a strangely uplifting and humorous-at-times family drama.”

The cast went through “various permutations” to assemble in light of the indie financing process, according to Paquin. “You have to build the pieces of the puzzle to figure out the bigger financial picture and when you’re really and truly asking people to come in just for the love of the art, availability changes on almost a monthly basis,” she said.

Describing all the cast iterations as equally wonderful, Paquin said “the final one that came together is absolutely dreamy.”

Paquin also disclosed that her character is seldom seen directly in the movie. “You only ever see Colleen, my character, through flashbacks as told by her various siblings and her husband and her father,” she said.

As “The Parting Glass” is an independent film, which Debruge cited is arriving at a moment in which such films are “really beleaguered in theaters here,” Paquin explained that “we wouldn’t do it if we weren’t passionate about it. You don’t produce independent film if you’re looking for fame, finance, and glory.”

She continued, “You do it because of the love of the art — because of stories that you passionately want to tell. And this is one of those for us.”