In the first entry in the Sony Universe of Marvel Characters, Tom Hardy merges with a squirmy alien parasite to become a monster superhero. But it's even squirmier to see him merge with a comic-book franchise. 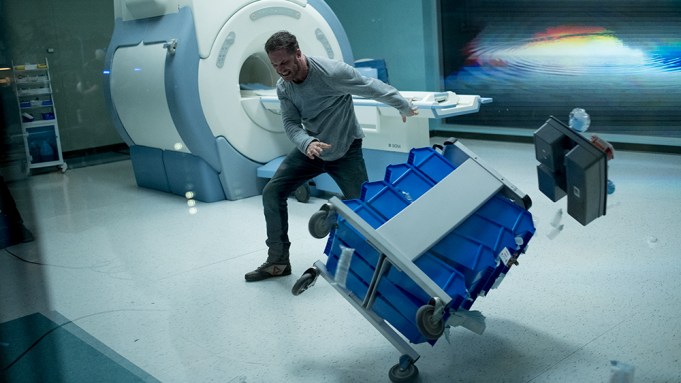 In “Venom,” the spectacular but mostly derivative and generically plotted new comic-book origin story (it’s the first installment of the Sony Universe of Marvel Characters), Tom Hardy is afflicted with an otherworldly force that invades his mind, his body, his very being. It’s called the desire to act like a stumblebum Method goof. The symptoms, which are highly visible and dramatic, range from a propensity for bug-eyed staring to a tendency to swallow each line with a kind of renegade doofus mumble, in a way that leaves Hardy sounding like a cross between early Marlon Brando and late Adam Sandler.

As anyone who saw his silky and cutting performance in “Locke” can attest, Tom Hardy is one of the smartest actors around. So why, in “Venom,” does it seem like he’s doing his impersonation of a benignly inarticulate stoner clown who’s only got half his marbles? It may be his way of lightening up and going with the flow of a popcorn movie. It may be his way of playing a guy who becomes one-half of a hybrid creature: a fearsome monster superhero who’s like Jekyll and an alien Hyde in one mutating gelatinous body.

Yet if you watch and listen closely, you can also see ghosts rattling around in Hardy’s performance — the ghosts of actors like Robert De Niro and Mickey Rourke, who attained a timeless mystique by expressing themselves with a kind of post-verbal street poetry. They were the spiritual sons of Brando, whereas Tom Hardy, born in 1977, is like the eager grandson. In “Venom,” his busy mannered acting fills a void, but it’s also a stunt designed to convince the world, and maybe himself, that he’s holding onto his cred.

This isn’t the first time, of course, that Hardy has done a comic-book movie; he portrayed the villainous hulk Bane in “The Dark Knight Rises.” But there’s a built-in respectability to playing a creep villain, especially if you’re hitting the all-time mumbling jackpot (you could barely understand a word Bane said). Playing a comic-book hero is different. No matter how fanboy dark and hip the character is supposed to be, you’re still joining a franchise, melding yourself with a corporate agenda that stands for something besides art. And that can be a problem if your brand, like Hardy’s, is that of an acting purist. One need only go back to that season of “Entourage” in which Vincent Chase played Aquaman to realize that for certain actors, there’s an emasculating element to signing on to play a comic-book hero. It seals your stardom, but it takes away your ability to say, “I stand apart from the machine.” You’re now the machine’s biggest cog.

In “Venom,” directed with rote impersonality by Ruben Fleischer (“Zombieland”), Hardy plays Eddie Brock, a San Francisco investigative reporter who works for a progressive cable channel sort of like MSNBC. He’s got his own show, “The Eddie Brock Report,” which takes him out onto the street to tackle the stories others won’t. He’s supposed to be a fearless truth-teller. So when he is handed what’s meant to be a softball interview with Dr. Carlton Drake (Riz Ahmed), a sinister tech mogul who’s been researching ways to extend the lives of cancer patients (but whose experiments have a funny way of killing off the people he’s using as guinea pigs), Eddie won’t back down. Using classified material he lifted off the computer of his fiancée, Anne Weying (Michelle Williams), Eddie, in his mush-mouthed way, pummels Drake with assaultive questions.

The result? Eddie gets tossed out of his job and career — and for good measure, Anne does too (so he loses her as well). The way Hardy plays all this, Eddie seems to mess up not out of raw journalistic courage but because he’s too flaky to have realized the risk he was taking. Yet there’s no denying that Hardy seems more at home when Eddie is a borderline derelict who has lost everything. “Venom” is no character study; it’s a by-the-numbers fantasy of processed awesomeness. Eddie is meant to be Clark Kent for the age of activism, but really, the movie just needs to give him something to do before his big transformation. The one in which a squishy mass of alien protoplasm leaps into his body and melds with it, turning him into a slavering demonic antihero.

The squirmy alien is a Symbiote, a creepy-crawly organism lifted from a crash-landed spaceship by Dr. Drake, who needs to find a human host for it. But most of the humans he tries reject the Symbiote like a failed heart transplant. It’s Eddie who turns out to have the right body chemistry (or maybe it’s just that he’s enough of a badass).

Venom is one of those characters who’s a compendium of a dozen elements you’ve seen before. He looks like a nod to the cobra-headed creature of the 1966 Hammer horror film “The Reptile.” He’s got a head, with white slit eyes, that glistens like a Philadelphia Eagles helmet made entirely of membrane, and that opens into a fearsome set of alien jaws. He’s got a tongue to make Gene Simmons blush and a voice to make James Earl Jones go, “Didn’t I invent that voice in ‘Star Wars’? And haven’t fantasy films been imitating it for the last 40 years?” The answer is: Yes and yes. The wild card in “Venom” is that once the amorphous alien melds with Eddie, it starts to talk to him (inside his head). They become twin personalities sharing one body, so they’ve got to work things out.

By the end, the character, in his Vader-with-attitude way, growls out a few vaguely amusing pissed-off things. (You realize that he’s a new breed of snark beast around the time he drops a certain word starting with “p.”) But it’s telling that the TV commercials for “Venom” all feature this creature fully formed. Because it’s so long into the movie before Venom comes completely alive as a character that the commercials amount to a kind of spoiler. And it’s not hard to see why they’re designed that way. Venom could have been a fun creation, but the film spends too long watching him…originate. The movie “Venom” actually wants to be is the sequel.

In “Venom,” we’re watching Eddie gain control of the parasite within and navigate his new powers, which consist mostly of an ability to fling his limbs around like spectral matter; they’re like webs with muscle. It’s no coincidence that these powers are a logistical cousin to Spider-Man’s. For Venom is part of the Spider-Man branch of the Marvel cosmos. That’s why he’s allowed to be in a Marvel movie released by Sony.

But what an exhausting thought that is! “Venom” is a textbook case of a comic-book film that’s unexciting in its ho-hum competence, and even its visual-effects bravura. Make no mistake: The effects can be dazzling. The alien matter splattering itself around like random tentacled liquid, the way Venom cross-breeds Spider-Man’s skyscraper-hopping agility with the Hulk’s dynamo destructiveness — it’s all diverting eye candy. But to what end? This gateway into the Sony Universe of Marvel Characters (get ready: there are 90!) may not sputter as badly as Tom Cruise’s “The Mummy,” but it could turn out to be a similar case of a franchise kickoff that doesn’t fully attain franchise liftoff.

Tom Hardy has never been an actor who lets you cozy up to him. In “Max Mad: Fury Road,” he played the title character as a blitzed shell of his former self (and Max, 35 years ago, was already a shell), and in “Venom” his quizzical short-circuited quality makes him seem, at moments, like Kevin Costner’s dim-bulb brother. Yet in a pulpy way this works for the movie, since Eddie doesn’t seem reduced by becoming one-half of a monster entity. No, it completes him. In that light, it will be interesting to see if the character of Venom completes Tom Hardy, or if it winds up giving him the power to do what he wants. Let’s hope it doesn’t consume him.