Matt Dillon is spooky and possessed in Lars von Trier's serial-killer drama, a movie that keeps you grimly absorbed and shut out at the same time. 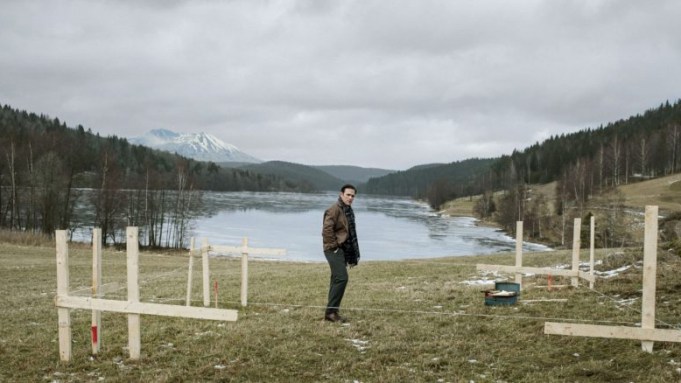 There’s a transcendently creepy image in “The House That Jack Built,” Lars von Trier’s two-and-a-half-hour drama starring Matt Dillon as a serial killer in the late ’70s. The movie is divided into five “incidents” — the word used by Jack (Dillon), a loner and failed architect in the Pacific Northwest, to describe the gruesome banquet of homicide he orchestrates and improvises, each act of hideous violence made different from the last (though he thinks of all of them as works of art). In one of these atrocities, he has been out for an afternoon hunting with his “family” — a woman (Sofie Gråbøl) he’s seeing and her two young sons — and, in a shocking moment, he stands in a rifle tower and guns down both boys. The second murder is a shot to the head that, in its suck-in-your-breath way, evokes the JFK assassination.

OK, that’s horrible. But the truly creepy moment arrives after that. Jack takes the corpses to the walk-in freezer where he stores the bodies of all his victims. He waits until rigor mortis is setting in and then, using tools, he sets one of the boy’s faces so that it looks…just so. We get a glimpse of it: The face is now fixed with a hideous bloody grin, so that the boy resembles a dead tween version of the Joker. That’s a memorable image of the evil men are capable of.

“The House That Jack Built,” however, only rarely achieves that level of disturbing poetic awe. The film lopes along in a way that’s grimly absorbing yet, at the same time, falls short of fully immersive. And that’s not just because a lot of it doesn’t track along the spectrum of reality-based storytelling. (This is a movie that features, in scene after scene, the world’s dumbest cops.) Shot in the stripped-down, naturalistic hand-held manner that gives von Trier’s films their immediacy, but also leaves you with the feeling that he’s making up scenes as he goes along, “The House That Jack Built” presents a murder junkie of cold-eyed lunacy and raging indifference whom the movie doesn’t necessarily want you to understand.

There’s an integrity to that, since serial killers are weirdly wired animals. It’s folly, on some level, to try and “explain” them. In “The House That Jack Built,” Dillon gives a spooky and possessed performance, one that reaches to the outer limits of a compulsive murderer’s flat affect and lunar oddity. At first he’s a volatile nerd, in buttoned-up shirts and aviator frames (very Dahmer) and plastered-down hair, who talks and talks his way into a victim’s house. (He’s so nutjob obsessive that if you listen long enough, the crazy patter starts to turn manipulative.) His Jack puts on an imitation of emotions and then wears them like a badly fitting set of clothes. He also strangles, stabs, mutilates, and fires bullets in full-metal-jacket casings. He has no feeling for others, and that’s what haunts us: Looking at Jack, we don’t feel a thing — or, rather, we feel an absence of empathy that mirrors his own.

But that’s also a problem for the film. Jack is by turns cunning and sloppy, arrogant and opaque. He suffers from obsessive-compulsive disorder, which compels him to return to one victim’s house three times to clean up the tell-tale blood he only imagines is there. He also likes to tempt fate, taking chances that are completely…well, insane. Through it all, though, he remains a man who’s lifeless on the inside. And “The House That Jack Built” is too. It’s not just a prestige sadomasochistic exploitation film, like von Trier’s “Antichrist” or parts of “Nymphomaniac: Vols. I and II.” But it’s a drama that leaves you shaken yet detached, chilled and a little numb. Almost every scene in it has been overly designed to grab your attention.

Von Trier, for a while now, has winked at the way that he himself projects the spirit of a killer. The characters in his films — Emily Watson in “Breaking the Waves,” Björk in “Dancer in the Dark,” just about everyone in “Dogville” — have often ended up dying in what feels like the director’s ritualized acts of execution. And the comments that got von Trier banned from Cannes seven years ago, when he confessed in a press conference to having maybe just a tiny little soft spot for Hitler (“I think he did some wrong things…but yeah, I understand much about him and I sympathize with him a little bit”), fed into the von Trier cult of the-killer-inside-me. That moment was the culmination of his transition from artist to punk provocateur who wore the snarky perversity of his aggression like an armband.

When von Trier walked into the theater of the Palais just before the world premiere of “The House That Jack Built,” the audience greeted him with a standing ovation that lasted for five minutes. The warm welcome seemed to be a way of saying: All is forgiven. We still love you. And now more than ever, we need an auteur like you. What the festival needed, after an opening week as bereft of headlines as this one, was a big bang, and “The House That Jack Built” delivered it — though given that it features an intensely compelling movie star as a human butcher, and serves up his crimes with a glare that’s as matter-of-fact as it is intense, it hardly needed to be a great work to provide that. When a hundred people walked out of the screening midway through, to von Trier that must have been the equivalent of cheers and applause.

Von Trier, to me, hasn’t made anything close to a masterpiece since “Breaking the Waves,” in 1996, and “The House That Jack Built” doesn’t spoil that record. It’s halfway between a subversive good movie and a stunt. It’s designed to get under your skin, and does. But it would have gotten under your skin more if it offered a humane counterpart to Jack — if it didn’t remain so fixated on Matt Dillon’s disaffected zombie drone.

The opening episode sets the tone: Jack is driving along in his hand-painted, windowless cherry-red van, and he picks up a woman whose car has broken down, played by Uma Thurman with a flirtatious hostility that seems almost designed to goad someone into becoming a serial killer. Jack has never murdered anyone before (has he thought about it? We aren’t told), but it doesn’t take long for him to smash her face in with a broken car jack — which makes us think, after a thousand movies and “Law & Order” episodes: How is he going to get away with this?

The lackadaisical crime-hunt dimension gets explained by the pre-forensic ’70s setting. And also, to a degree, by the kind of luck that’s part of what lends serial killers their confidence: When a state line favors Jack’s quick hiding of Thurman’s car, or when (after the second incident) he drags the victim’s body along the road, face down, from the back of his van, which seems like an act of grandiose self-sabotage, and then watches the rain wash away the trail of blood and flesh he has left behind, it’s as if something in the cosmos were looking out for him. Jack creates a serial-killer handle for himself — “Mr. Sophistication” — and von Trier keeps playing David Bowie’s “Fame,” though it’s a ham-handed device, since the notion that serial killers seek celebrity is a cliché (and one that’s not necessarily borne out by what we see here).

If you’re sensing that there might just be a tinge of sadism toward women in “The House That Jack Built,” von Trier, in this case, is both guilty as hell and — to a degree — bizarrely off the hook. Because, of course, it’s the character’s sadism. Then again, the question has to be asked: Is von Trier reveling in the misogynistic bad vibes? Is he getting off on it? That’s a gut call, and my gut in this case says no. That said, the fourth incident, which features Riley Keough, will leave you squirming with a discomfort that veers distressingly close to a torture-porn hangover. Keough’s Jaqueline — or as Jack, with rank distaste, calls her, “Simple” — is a young woman who dresses like a prostitute for a date with Jack. He comes over, and though he’s faking a leg injury, he’s no longer the geek. He’s stronger and more virile, and he’s got his victim where he wants her. But when he pulls down her top and begins to draw dotted cutting lines around her breasts, we think, “Oh, no…” And the movie follows through on our dread.

There have been a handful of films over the decades that have lured us inside the lives of serial killers. “The Boston Strangler” did it 50 years ago. And in 1986, Michael Mann’s “Manhunter,” the most accomplished thriller of the modern era, turned Tom Noonan into the greatest psycho since “Psycho” — and part of the horror was that we got to know him. But “The House That Jack Built” never gets us to fully identify with Dillon’s Jack. The movie is constructed from his point of view (there’s no one else’s), but he’s too much of a sicko not to draw back from.

Instead, we’re meant to stare right through him and lock into a cathartic kinship with von Trier, whose impulse toward subversion is working through Jack. From the start, Jack carries on a dialogue, heard on the soundtrack, with Verge (Bruno Ganz), a kind of metaphysical therapist confessor for serial killers through the ages; he’s like God crossed with the caretaker in “The Shining.” He has heard it all, and he greets Jack’s rationalization of his actions with a weary dose of Euro mockery. But what we’re really listening to is von Trier have a debate with himself.

The film keeps pausing for lectures: on the fermenting of grapes, the architecture of cathedrals, the Stuka dive-bomber, and the Nazi concentration camps (which plays as von Trier’s not-so-subtle apologia for his remarks seven years ago). Jack, in each case, is justifying his actions, treating murder as an art form. Whereas Verge keeps telling him that true art requires love. I think the meaning of all this is that Lars von Trier knows he’s no longer creating films that are fueled by compassion, the way that “Breaking the Waves” was. He has become an artist of anger, of addiction, of the kinkiest extremes. And so now, he allies his view with that of a killer. “The House That Jack Built” ends with an epilogue that feels as if it starts over five times. Von Trier keeps trying to figure out how to deliver Jack into hell. But he dithers about it so much that the only message the movie leaves you with is that he doesn’t want to let go of him.