Film Review: ‘The Hate U Give’ 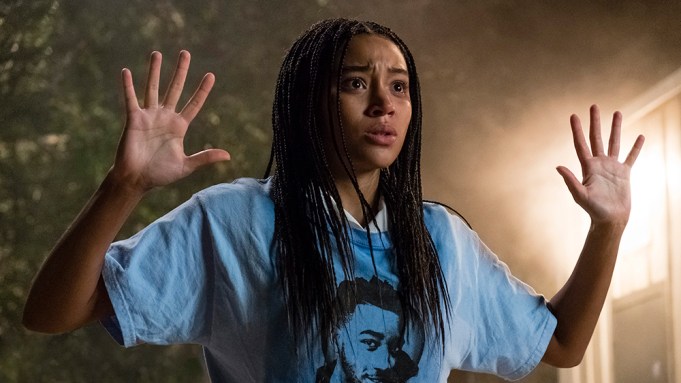 It probably shouldn’t be possible to make a big, broad, laugh-and-cry-engaging studio movie that hinges on the shooting of an unarmed black teenager by a white police officer (and how chilling it is that this ugly phrase has long since become a stale cliché). But with his adaptation of Angie Thomas’ bestseller “The Hate U Give,” George Tillman Jr. has done just that, pulling off a brilliantly modulated balancing act between dark and light, anger and optimism, white privilege mined for pointed laughs and black fury portrayed as a galvanizing force for change. Entertaining, enraging, and ultimately deeply moving, “The Hate U Give” is poised to be a hit, and deserves to be.

Working from Audrey Wells’ lively if occasionally on-the-nose adapted screenplay, the great strength of Tillman’s film is a moral clarity as direct and challenging as skyrocketing star Amandla Stenberg’s wounded, courageous gaze. Without compromising the complexity of the issues raised, or condescending to the youth of its protagonists, “The Hate U Give” strides with absorbing, intelligent certainty through the desperately dangerous, uneven terrain of racially divided America.

Starr Carter (Stenberg) is a bright, ’90s-obsessed African-American teenager with a discerning eye for Air Jordans, living in the predominantly black neighborhood of Garden Heights. The local high school is “a place you go to get drunk, high, pregnant or killed,” and so she attends Williamson, a largely white private school, at the behest especially of her mother Lisa (a superb Regina Hall). Starr code-switches effortlessly between Garden Heights Starr and “Starr Version 2” — sloughing off her hoodie, swallowing any aggression that might make her seem “ghetto,” and scrubbing her vocabulary of the black slang and inflections that her white peers, including boyfriend Chris (“Riverdale” star KJ Apa) and BFF Kayleigh (Sabrina Carpenter), have no problem using.

But what seems to be a simple fish-out-of-water set-up (that does give rise to an amusing meet-the-parents scene among others) is complicated in a multitude of provocative ways. Starr’s family is a stable, loving unit, but it is also messy: Her parents canoodle openly (“their cuteness can be extra” eyerolls Starr), but her brother Seven (Lamar Johnson) is the child of another mother — meaning he, too, is often forced to choose between differing modes of blackness. Their father Maverick (a sympathetic, broad-shouldered, heavily tattooed Russell Hornsby), first shown giving his kids “the talk” in which he drums into them the rules for surviving a traffic stop and makes them learn the Black Panther Ten-Point Program by heart, is an ex-con who took a three-year rap to protect local gangster King (Anthony Mackie), the architect of the Garden Heights drug trade.

Long before Starr attends the fateful party where she meets childhood playmate and crush Khalil (Algee Smith), who will end the night bleeding out from bullet wounds, clutching a hairbrush that an officer mistook for a gun, there are hints of another senseless tragedy in her past. To add even more unexpected perspective to the mix, Starr’s uncle Carlos (Common) is himself a cop, who will gently try to make Starr see another angle on the racist crime to which she is the only witness, before being forced to concede that “it’s a complicated world.”

Khalil’s killing is the lit fuse on the bomb that will explode Starr’s carefully compartmentalized life. She’s urged to go public by a local activist (“Insecure” star Issa Rae) while her mother counsels caution. As a compromise she agrees to do an anonymous TV interview, only to be horrified by the media’s fixation on Khalil’s potential criminality, the white-lady interviewer hiding her prurience behind a maddening, painted-on expression of sympathy. And the attitudes of her Williamson schoolmates are laid bare by their reaction to the killing even before they’re aware of Starr’s proximity to it. All this knotty texture makes it impossible to begrudge a moment of the film’s 133 minutes, and if sometimes the dialogue can get a bit preachy, like we’re lurching from one teachable moment to another, it doesn’t really matter when the lessons are this nuanced and vital.

There is no point in the last five years or so at which the storyline that “The Hate U Give” tackles so fearlessly would not have been acutely topical and potentially incendiary. But the film’s most impressive aspect is a perspective rooted deeply within the black community it portrays, that does not compromise one ounce of its rage against external injustice, while still delivering a clear-eyed assessment of problems that are only fixable from the inside: Solidarity against the enemy without should not have to mean harboring and encouraging the enemy within.

Under a soundtrack that cleverly mimics the film’s outlook by oscillating between snatches of 2Pac and modern R&B and Dustin O’Halloran’s classically melodic piano-led score, “The Hate U Give” is notable for the love it gives to characters on all sides of its multifaceted narrative, and it builds to a sense of hope amid despair that is even larger and more broadly relevant than its already enormous racial themes.

“If you don’t see my blackness, you don’t see me,” Starr tells Chris in response to his clueless-white-boy shtick about “not seeing color.” But her blackness is not her only identity: She is also glowingly emblematic of a new American generation unfairly tasked with solving social ills they had no hand in making, but of which they are overwhelmingly the victims. When Starr finally finds her voice, it’s hard not see in her the Parkland students, the schoolkids who stand (or kneel) in solidarity with Colin Kaepernick, the ones who forego their right, as children, to protection to become themselves protectors. “The Hate U Give” places inspiring faith in black youth, but also in youth itself, in all those young people who should never have been asked to make these impossible choices, but who are maybe the only ones we can trust to choose right.

Film Review: ‘The Hate U Give’