A sequel to the 2002 cult comedy 'Super Troopers' finds our idiot heroes making bad '80s jokes that feel even mustier than they did the first time. 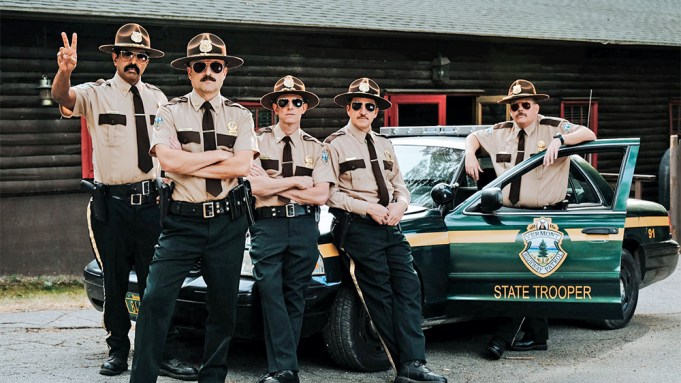 Every generation gets, or maybe chooses, the nostalgia it deserves. Boomer nostalgia is famously self-important, all about big stuff like the Beatles and Watergate and, you know, how we changed the world! It took a while, on the other hand, for Gen-X nostalgia to come into focus — and when it did, it was less with a bang of proud importance than with a snarky whimper of ironic junkiness. “Super Troopers 2” is an aggressively lame and slobby comedy full of cardboard characters and in-your-face naughty jokes that feel about as dangerous as old vaudeville routines. Yet if you watch it and think, “Wow, this sure is cheesy and dumb,” you’ve just paid the people who made it a compliment. In “Super Troopers 2,” they’re doing all they can to revive the feeling they had when they were smart kids watching dumb movies that they believed, at the time, to be cool.

“Super Troopers 2,” like the first “Super Troopers,” is about a hapless crew of khaki-clad law enforcers who are supposed to be straight-arrows in uniform but are actually — wait, don’t laugh yet — low-life druggies and idiots and wastrels with terrible mustaches. Who face off against another group of law enforcers. Who happen to be…Canadian. (Okay, you can laugh now.)

The movie features jokes about the metric system, jokes about people who don’t text, jokes about what your voice sounds like on helium, jokes about how funny it would be if you spoke French by saying things like “au bon pain grey poupon,” jokes about a construction-site worker who says “grab your caulk” (a joke that’s mocked in the movie for being bad — but then why is it there?), jokes about a guy who picks up an AK-47 and shoots a bald eagle out of the sky, and a running joke about ball-shaving. It also features ironic cameos by Lynda Carter, Seann William Scott, and Fred Savage.

It’s all meant to be outrageously uproarious, but much as I tried (I really did) to get on its wavelength, I can testify that it is not. Yet the real thing that “Super Troopers 2” is supposed to do is give you…that ’80s feeling. The feeling of getting stoned on stupid. It wants to be a loony-tunes bath of trash, a winking update of the spirit of the “Police Academy” comedies. This is probably the part of the review where I’m supposed to say that if you’re high enough, you’ll like the movie just fine. Then again, the same critical standard could be applied to Jolly Rancher commercials or old episodes of “Saved by the Bell.” “Super Troopers 2” aims for the bottom, and that’s the whole point.

Is there an audience for it? Actually, the audience is already way ahead of us: They crowd-sourced the movie. The first “Super Troopers” came out in 2002, two years after director Todd Phillips made his Hollywood debut with the meticulously clever and affectionate I-love-the-’80s comedy “Road Trip” (not too nasty, not too nice: just right). He created a formative text of Gen-X nostalgia that helped pave the way for the release of “Super Troopers,” the second film by the Broken Lizard comedy troupe, which had made a witty debut with “Puddle Cruiser “(1996) but now reverted to the school of filmmaking that celebrates the lowest common denominator as the only one worth striving for.

“Super Troopers” grossed $18.5 million, which at the time was so-so for a neo-’80s stoner dork-fest. But it became a cult hit on DVD, and that’s why there’s a certain mass-market poetry to the notion of a bunch of aging Gen-Xers ponying up to fund a sequel to their favorite homage to bad ’80s comedy made by a bunch of fellow aging Gen-Xers.

The whole series, though, now feels a little long in the tooth. The Broken Lizard members didn’t just write “Super Troopers 2” (or, in the case of Jay Chandrasekhar, direct it). They’re the film’s stars, and though it’s obvious that they’re working hard to crack each other up, what we’re watching comes down to a bunch of middle-aged non-actors with woefully nondescript screen personalities doing five variations on Paul Blart. (The most effective is Kevin Heffernan, as the hostile doofus Farva, who’s like Paul Blart’s evil twin.)

The loopy version of Canada in which the film is set fits in with the crude-but-goofy Broken Lizard aesthetic; it allows the film to be xenophobic and innocuous at the same time. Our heroes, having been stripped of their jobs, are toiling away as construction workers. But when it’s discovered that the northern tip of Vermont actually pokes up into Canada and has to be reclassified as American soil (do yourself a favor and don’t think about that for more than two seconds), the state’s governor (Lynda Carter) rehires the former Vermont State Troopers to patrol the territory during the transition. This sets them up against the Canuck locals, who include a smarmy mayor (Rob Lowe in pouffy hair), a trio of disgruntled Mounties (Tyler Labine, Will Sasso, and Hayes MacArthur), and a bunch of righteous natives who speak in zany French Québécois accents.

The tone of “Super Troopers 2” falls somewhere between late-period Russ Meyer and “CHiPs.” The film’s mockery is harmless, yet coming nearly 40 years after the dawn of the ’80s, there’s something almost presumptuously dated about it, as if these jokes were simply eternal. The plot, what there is of it, spins around a drug-smuggling racket, and the result is that Jay Chandrasekhar’s character gets hooked on pills designed to boost women’s sexual vitality. With all that feminine fluid sloshing around in his system, he starts to act “bitchy” and loses his sense of direction. If you find that funny, “Super Troopers 2” may leave you wistful for a time when male panic could still look like satire.