Film Review: ‘Sorry to Bother You’ 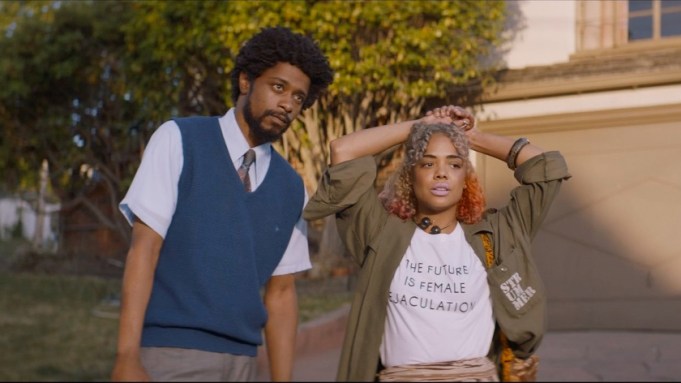 Nearly as deranged as it is politically engaged, Boots Riley’s sui generis “Sorry to Bother You” is the kind of debut feature that knocks your socks off, tickles your bare tootsies with goose feathers for a while, then goes all Kathy Bates in the final stretch, ultimately taking a sledgehammer to your kneecaps. What, there’s no category on Netflix for movies like that? Too bad: The Oakland-based rapper isn’t waiting for permission to speak his piece, pioneering a new form of wildly inventive, highly confrontational satire that dares to question the system, pitting an immensely likable black actor (Lakeith Stanfield) against the fat-cat capitalists (represented here by a coked-out, sarong-wearing Armie Hammer) responsible for inventing a new 21st-century form of slavery.

It’s a hugely ambitious project that ultimately caves under the weight of its own artistic intentions, but that shouldn’t stop this revolutionary statement from making its mark. Channeling the quirky visual style of Michel Gondry and other music-video directors, Riley casts Stanfield as Cassius Green (pronounced “Cash Is Green,” get it?) a kind of middle-class doppelganger, giving him patchy sideburns and a matching ’fro — not the look The Man is usually willing to employ, although for this particular gig, just two skills really matter: “You have initiative, and you can read.” (After all, as the Regalview motto goes, “Stick to the script.”)

And so Cassius lands a job with Regalview, selling encyclopedias — or the equivalent — over the phone. His cubicle sits adjacent to Danny Glover, a veteran salesman (you guessed it, he’s getting “too old for that shit”) who offers four indispensible words of advice that begin Cassius’ climb to the upper ranks of salespeople: “Use your white voice.” At first, Cassius doesn’t understand what that means, but the instant he drops the slang and gets all nasal (in a hilarious gag that eventually wears out its welcome, the movie’s “white voices” are dubbed by David Cross and Patton Oswalt), his sales record skyrockets.

Cue the montage of high-fives and celebratory dances between Cassius and his direct manager (the Jason Mantzoukas-looking Michael X. Sommers), while everyone else in the basement-level boiler room looks on with thinly veiled disdain — including his activist girlfriend Detroit (“Thor: Ragnarok” star Tessa Thompson), who puts her art career on pause to work at the call center for some reason. Cassius’ success comes in handy at home, since he and Detroit have been living in his uncle’s (Terry Crews) garage, four months late on rent. (The upgrade to a swanky new apartment is one of the movie’s more audacious in-camera tricks, as Cassius’ digs transform before our eyes, to which the once-reluctant Stanfield reacts with a mix of bewilderment and newfound pride.)

Meanwhile, dissatisfied with their own jobs, Cassius’ buddies attempt to unionize, and though he expresses half-hearted solidarity with their cause, Cassius is not about to pass up the promotion that whisks him to Regalview’s coveted upper level — a tall-windowed, golden-elevator upper floor where he gets a chance to make bank, so long as he can live with the truth about what the company is really selling. Suddenly, going to work means crossing the picket line, which is where Riley really makes his statement, asking audiences to consider how selling out to the system means denying more than just their own values, but betraying their fellow citizens as well.

But Riley isn’t content to stop there, escalating the satire into the realm of full-blown surrealism. There are similarities here to Mike Judge’s equally messy “Idiocracy,” as every blank surface and TV screen in town features commercials for a voluntary forced-labor system called Worry Free Living (the billboards double as canvases for a renegade street-art collective known only as Left Eye), while the most popular thing on television is an “Ow My Balls!”-like game show called “I Got the S— Kicked Out of Me.”

Things get even crazier once Cassius is invited to a house party/orgy hosted by Clearview CEO Steve Lift (Hammer) and makes a wrong turn on the way to the bathroom, uncovering the company’s darkest secret. Except, by this point, the movie has left the realm of cautionary tale and spun off into some sort of sci-fi fever dream, complete with eerie zither score (courtesy of Tune-Yards), as Cassius becomes an overnight internet sensation. (Why is it that movies never seem to understand how viral videos work? Here, a protester pegs him in the head with a can of Soda-brand soda, and the next thing you know, America’s children are buying bandaged-fro wigs and dressing as Cassius for Halloween.)

As its half-sarcastic title suggests, “Sorry to Bother You” recognizes what telemarketers and message movies have in common: There you are, on a date or else relaxing by yourself, when they barge in with an unwelcome pitch wanting you to change your mind. If you want people to listen, the key is to make it personal, keep it entertaining, which Riley does for the better part of the movie, although there comes a point when things get so twisted that a good portion of his audience simply tunes out. Looking as wild-eyed as Charlton Heston at the end of “Soylent Green,” Cassius goes on TV and screams, “They’re [third-act spoiler redacted], and nobody gives a f—!” Except guess what: Neither do we.

Paradoxically, the more ridiculous Riley’s gonzo social critique gets, the more boring it becomes, to the point that its out-of-control second half starts to feel like some kind of bad trip. As the movie’s allegorical relation to real-world problems blurs, audiences are left to wonder what Riley’s point is supposed to be: If he’s upset about society’s prison industrial complex, shouldn’t Worry Free be plucking innocent black men off the streets, rather than convincing them to self-incarcerate? And if art can make a difference, then why is Detroit’s gallery opening played as one big joke?

Maybe such questions don’t need answers, when the delivery device is as wildly original as this one is. A good portion of the audience may already know where “Sorry to Bother You” is headed because (a) the twist will be virtually impossible to keep quiet and (b) Riley published an early draft of his screenplay in a 2014 edition of McSweeney’s Quarterly Concern — which gives you an idea of the kind of hipster audience who will be the first to embrace this raucous oddity.

Riley has a lot to say, and the benefit of stashing it within such an over-the-top Trojan horse — one that calls for stop-motion animated sequences, X-rated bodysuits, and insane special effects — is that a good chunk of his message is bound to be heard. Judging by the undeniable, irrepressible talent on display here, this unapologetic satire certainly won’t be the last we hear from him.

Film Review: ‘Sorry to Bother You’