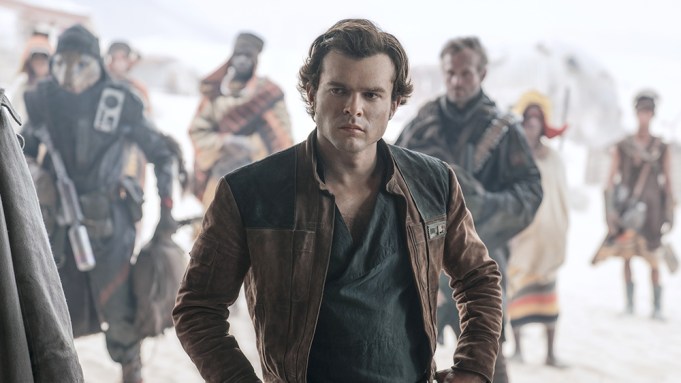 The most important thing to note about “Solo: A Star Wars Story” is that, in spite of its widely-publicized behind-the-scenes turmoil, culminating with the replacement of directors Phil Lord and Christopher Miller with Ron Howard several months into shooting, the film is not the disaster its production history might suggest. In fact, it’s not even close. Though burdened with a slow start and enough thirsty fan-service to power Comic-Con’s Hall H for a decade, it has a kicky, kinetic heist movie at its heart, and its action sequences are machine-tooled spectacles of the first order. Its performances, starting with Alden Ehrenreich as the young Han Solo and extending to the film-stealing Donald Glover as his wily frenemy Lando Calrissian, are consistently entertaining. And thanks to cinematographer Bradford Young, “Solo” allows for moments of real grit and something approaching interstellar realism amid all of the expectedly topnotch VFX. Say what you will about Lucasfilm’s itchy trigger finger under Kathleen Kennedy, but the team certainly has the good sense to keep their cash cows from roaming off the pasture.

And yet, maybe they could stand to be a bit more willing to fail. With Lucasfilm and Disney dead-set on monopolizing multiplexes for the rest of our natural lives, these “Star Wars Story” offshoots ought to give them ample room to let down their hair a bit and play in George Lucas’ expansive sandbox, leaving the narrative heavy lifting to the series’ numbered installments. At first glance, “Solo” seems the perfect vehicle to do so. It’s the first “Star Wars” film without a single use of the Force, the first without Anakin Skywalker or any of his descendants, the first to be largely unconcerned with broader galactic politics and the first to contain anything that could pass as a dirty joke. But even so, “Solo” retains an almost religious reverence for the franchise’s legacy, and the free-spirited story at its center is too often larded down with the weight of the past.

It’s hard to think of many characters from the last 45 years of American filmmaking less in need of an introduction than Harrison Ford’s Han Solo, but Howard’s film spends an undue amount of its early-going running through the origin story liturgy anyway. We finally get answers to some not-exactly-pressing questions, like, how did Solo get his name? And where did he get his blaster? (If you assumed the answers were “His parents gave it to him” and “He probably bought it somewhere,” you’d be wrong, but the alternatives presented here aren’t much more interesting.)

Long before his run-ins with Luke, Leia, and the inside of a tauntaun, young Han is living in a sort of thieves den on the filthy planet of Corellia. He’s just stolen a speeder and a small vial of coaxium, a rare and valuable mineral used as starship fuel, but he has no plans of offering it as tribute to the local capo, Lady Proxima (Linda Hunt). Dreaming of becoming a pilot, and smitten with a fellow thief named Qi’ra (Emilia Clarke), he’s plotting to use it as collateral to bribe their way to freedom on an outbound ship. Complications arise, and Han manages to escape by abruptly enlisting with the Empire, leaving Qi’ra behind.

Flash forward three years, and he’s a grunt recruit slogging it out in some inconsequential battle on a mudbound planet. He’s been waiting for a chance to go AWOL to rescue Qi’ra, and finally gets his window when he runs across a roving band of smugglers: Jaded leader Beckett (Woody Harrelson), his hard-bitten wife Val (Thandie Newton) and pilot Rio Durant (Jon Favreau). Now also joined by friendly Wookiee Chewbacca (Joonas Suotamo), Solo manages to cajole, charm, and lie his way into their uneasy graces.

Things have definitely started to drag by this point, but Solo’s first job with his new crew finally shakes off the doldrums. Jetting off to a new planet, their target is a trainload of coaxium being transported through the mountains on a dramatically elevated rail. Shot on location in Italy’s snow-capped Dolomites, the band’s daring raid takes place in midair, yet somehow feels more grounded than the vast majority of “Star Wars’” recent setpieces, the contours of the battle vivid and tangible. Thanks to a split-second decision by Solo, the gang’s booty is lost, which leaves them in debt to a fearsome playboy gangster named Dryden Vos (Paul Bettany).

On Dryden’s floating space-yacht, complete with dueling alien lounge singers, Solo is surprised to find Qi’ra. Through some mysterious, implicitly unsavory means, she’s wound up as one of Dryden’s top “lieutenants,” and offers some subtle help as Solo makes him an offer to erase the gang’s shortfall: They’ll travel to the mining planet of Kessel, steal a batch of coaxium in its volatile raw form, and race the cargo to the planet Savareen to refine it before it blows them all into smithereens. (No points for guessing roughly how quickly he’ll have to make that run.) But first, the crew needs a ship.

It would be a waste of a movie ticket to sit through “Solo” trying to guess which pieces of the final cut belong to Howard and which belong to Lord and Miller, though there are certainly hints of the “Lego Movie” directors’ style of insouciant cultural demythification in the scenes with Lando, whom Solo and Co. seek out to try and gain ownership of his ship, the Millennium Falcon. Played by Glover as equal parts suave hustler and foppish brat, Lando gets all of the film’s best laughs – “No! That’s a custom!” he screams as one of his many capes is threatened during a fire fight – and also serves as one half of its most intriguing relationship. His droid, L3-37 (Phoebe Waller-Bridge), is engaged in a one-robot campaign to free her fellow machines of their servitude, frequently launching into Emma Goldman-style stump speeches and taking part in some charged banter with Lando that gives “Solo” its most surprising kinks.

If only Solo and Qi’ra had a fraction of that chemistry. For a film that is constantly nudging us in the ribs with allusions to the original “Star Wars” trilogy, it does “Solo” few favors to bring to mind the incendiary interplay between Ford and Carrie Fisher that gave those films so many of their standout moments. Clarke and Ehrenreich have little such spark, although that seems less the fault of the actors than the unimaginative relationship they’re given to work with. Ehrenreich in particular is enduringly watchable: He nails Ford’s cocky gait, his roguish eye-twinkle, his puffed-cheeked finger-pointing, and while the performance may initially come across as a highly skilled bit of mimicry, by the film’s end he’s managed to give the role a satisfying new spin.

Few would object if Ehrenreich were to reprise the character in future installments (“The Young Han Solo Chronicles”? “Wookiee and the Bandit”?), but a scruffy, nerf-herding smuggler like Han needs room to stretch and make trouble. After all, it took the same sort of unfettered imagination to produce both “A New Hope” and “The Phantom Menace” – if you aren’t willing to risk the latter, there’s not much chance of ending up with the former.

Reviewed at Dolby Theater, Hollywood, May 10, 2018. (In Cannes Film Festival)