Alfonso Cuarón's neorealist drama about a family in early-'70s Mexico City is a luminous vision that insists on floating above its characters. 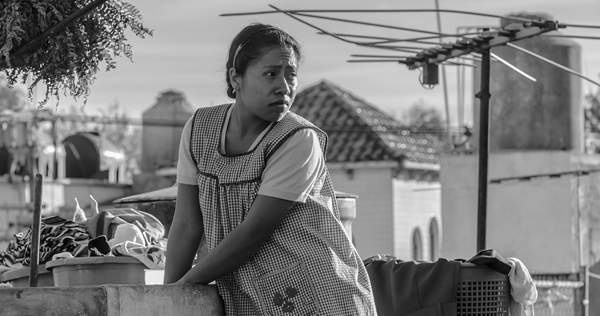 Alfonso Cuarón is a filmmaker of such up-front humanity, and such commandingly sensual technique, that when you watch “Roma,” his shimmering black-and-white neorealist slice of life about a middle-class family and its loyal domestic worker in Mexico City in the early ’70s, you get the feeling that every image — every emotion — is perfectly set in place. Cuarón shot and co-edited “Roma” himself, in addition to writing and directing it, and the movie is so naturalistic that it’s like a dramatized documentary. At the same time, Cuarón turns his camera-eye gaze into something heady and aestheticized. He dunks us, image by luminously composed image, into a panorama of the hurly-burly of Mexico City in 1970 and 1971 — the glinting squalor of the streets, the Americanized fragments of pop culture (Creedence vs. the Beatles!), the tatters of class war. He puts us in close quarters with his characters, but he’s also staring at them from a beatific and nearly abstract remove.

For all its dust and flow and sprawl, there’s hardly a moment in “Roma” that isn’t orchestrated for our observance from on high, and that’s one reason why a lot of people are likely to hail it as some sort of masterpiece. “Roma” is no mere movie — it’s a vision, a memory play that unfolds with a gritty and virtuosic time-machine austerity. It’s a Proustian reverie, dreamed and designed down to the last street corner and scuffed piece of furniture. Yet I actually think that it’s far from a masterpiece, because as a viewing experience it has a hermetic coffee-table-book purity. Every moment in it is sculpted and delivered in the same methodically objective and caressing Zen way.

Cuarón, make no mistake, has done this entirely by design. He presents life in the unruly Mexican metropolis as an immersive experience, a you-are-there trance-out. For what it is, “Roma” is gorgeously done, yet you may feel gently absorbed in it more than you’re deeply moved by it. If the film were more thrashing and vulgar, it wouldn’t be such an art object, but it might have been more dramatically galvanizing.

Cuarón seizes us from the opening shot: an ornate diamond stone pattern that looks like it might be part of a church but turns out to be the floor of a private apartment garage. It’s being washed down with soapy water, and the woman doing the washing is the silent, tranquilly morose, devoted Cleo (Yalitza Aparicio), who looks after Sofia (Marina de Tavira), an addled wife and mother, and her husband and dog and four boisterous children.

Before they arrive, the camera pans and glides around their stately and darkly handsome apartment, in the city’s upscale Roma district, as if it were contemplating some ambiguous setting out of an Antonioni movie. But, in fact, there’s no overwhelming mystery to this family. The kids run around and tease each other and break things; one of them has a funny way of talking about the occupations he has held in a past life. The movie observes all this with a kind of lordly detachment. The father, Antonio (Fernando Grediaga), squeezes into the garage in his wide-bodied Ford Galaxy, an imposing figure heralded by an ashtray jammed with cigarette butts and classical music blasting from the radio, but when he gets out of the car, he’s just a bespectacled geek who then huddles with his family to watch TV. Tellingly, it’s Cleo who not only bids goodnight to the kids but says “I love you.”

Cleo is the central figure of “Roma,” yet for most of the film she barely says a word. She’s stoic and dutiful, with a wide face that suggests a statue of humble rectitude, and the fact that she loves this family as her own is presented without question. Speaking in her native Mixtec, Yalitza Aparacio, a non-professional actress, makes Cleo a doleful earth mother with a deep presence, a kind of working-class saint — and, tellingly, a woman with problems she feels compelled to weather without protest. That’s the only option she has. Cleo goes on a date with Fermín (Jorge Antonio Guerrero), who after sleeping with her grabs the bathroom shower rod and uses it, while nude, as a martial-arts prop. He seems likable enough (in a slightly crazy way), until he takes her to the picture show, and she uses the intimacy of the theater setting to let him know that she’s pregnant. That’s more or less the last she’s going to see of Fermín, who skulks off to the restroom, never to return.

Going out to the movies figures majorly in “Roma.” At one point, we’re startled to see a late-’60s outer-space film, with primitive special effects and two floating astronauts in conversation, that looks like it could have been a study for “Gravity,” the 2013 sci-fi landmark that was Cuarón’s last film before this one. “Roma” is the sort of movie an ambitious director summons the power to make after a smash hit like “Gravity”: searingly personal, without movie stars, more “Amarcord” than space opera. Yet “Roma” too, in its way, comes at you from a God’s-eye view. Cuarón floats above the action he’s showing us. He’s become the filmmaker as neorealist deity.

The movie becomes a kind of Marxist adventure told from a family vantage. It takes us to a corrupt hacienda at Christmas time, with “Jesus Christ Superstar” on the turntable, where the decadent bourgeois swells toasting their good fortune seem to be whistling past the graveyard of the land grabs that are being whispered about; or out into the streets on June 10, 1971, with the audience plunged into the roiling fear and bloodshed of the Corpus Christie Massacre, the state-sanctioned attack on student demonstrators that heralded a new era of clampdown in Mexico.

As for Cleo, she’s portrayed as someone who can hardly afford political passion. She has her baby, in a cataclysmic scene that turns out to have a (delayed) twist. Meanwhile, Antonio is revealed to be a scoundrel who just wants out of his family. The scene where his kids glimpse him on a downtown jaunt with his mistress is a perfect encapsulation of the Cuarón method. In another movie, this would have been a melodramatic bombshell, but in “Roma” it’s just another moment of life passing by.

“Roma” has many indelible moments: an earthquake viewed from a hospital nursery; a man shot at point-blank range in a furniture store during the massacre; the climactic surge and release of Cleo’s life-saving rescue of several of the children from the churning ocean surf. In “Roma,” life goes on, even as it’s suffused at every turn with the possibility of death. Cuarón has paid meticulous homage to the Mexico he grew up in, but “Roma” in the end isn’t so much a drama as a meditation, a movie whose artistry might have soared more if it came at us with less insistent gravity.