Steven Spielberg has turned Ernest Cline's novel into a virtual-reality fanboy geek-out that's entrancing when it's virtual, less so when it's real. 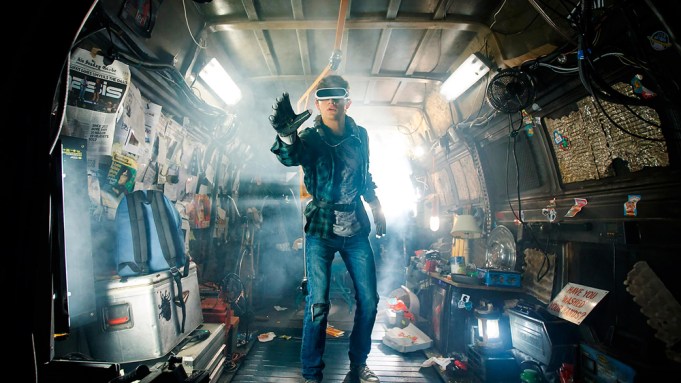 In “Ready Player One,” Steven Spielberg’s dizzyingly propulsive virtual-reality fanboy geek-out, Wade Watts (Tye Sheridan), a teenager living in a dystopian trailer park in the year 2045, spends most of his time strapping on a headset and immersing himself in the OASIS, a techie surrealist theme park of the senses. Once inside, you never know what you’re going to see or imagine next — though it’s hard to go for more than 30 seconds without encountering some succulent tidbit of pop nostalgia, most of it from the 1980s.

Early on, there’s a shoot-the-works car chase in which Wade — or, rather, his avatar, Parzival, who resembles a frosted-blond, plane-cheeked Keanu Reeves in a jean vest — climbs into the wing-doored DeLorean DMC-12 from “Back to the Future” and races through a cityscape at pedal-to-the-metal speed to the tune of Joan Jett’s “I Hate Myself for Loving You,” even as he’s pursued by King Kong and the T. Rex from “Jurassic Park.” (Blink and you’ll miss the Batmobile.)

A bit later, Parzival goes on a date with Art3mis (Olivia Cooke), who is also an avatar, with punk-red hair and the oversize eyes of an anime kewpie doll. He gets ready for the evening by morphing into assorted outfits — he tries on Prince, Michael Jackson, and a Duran Duran trench coat before settling on the shaggy suit and tie of Buckaroo Banzai. At a nightclub, Parzival and Art3mis boogie to “Staying Alive” on a floating disco floor and wind up literally dancing on air. All very trancy and romantic, though what good is virtual reality if you can’t wage an unholy battle in it?

Have no fear: In “Ready Player One,” there is plenty of vicarious fantasy combat, notably a war of the worlds that features the Iron Giant as well as the red-eyed, gleaming silver Mechagodzilla. Every time a creature like that shows up (at one point, even the monster fetus from “Alien” makes a kind of palm-buzzer cameo), it’s entrancingly cool. “Ready Player One” tells a breathless and relatively coherent story — essentially, the future of civilization is riding on the outcome of a video game — but the movie, first and foremost, is a coruscating explosion of pop-culture eye candy.

Spielberg, when he got up on stage to introduce “Ready Player One” at the film’s SXSW premiere, made a point of insisting that it wasn’t a film — he said it was very much a movie. Yet I wondered why he needed to make the distinction. Years ago, the words “Spielberg” and “fantasy” went together like “ice” and “cream,” or maybe “Citizen” and “Kane,” and one reason for that is that Spielberg grounded fantasy (even the spectacular extraterrestrial visit of “Close Encounters”) in the nitty-gritty of the real world. That’s what made his fantasies magical.

Yet ever since he became more of a serious, real-world dramatic filmmaker, Spielberg seems to have dichotomized reality and fantasy in his thinking. “Ready Player One” isn’t an obnoxiously flashy and hollow indulgence, like “Speed Racer” or last year’s live-action “Ghost in the Shell.” It’s an accomplished and intermittently hypnotic movie. Yet you may feel like you’re occupied more than you are invested. The virtual world that Spielberg creates, though it just about pops off the screen, isn’t an emotionally textured place. Mostly we’re just staring at it, or “riding” it.

The most telling sequence in “Ready Player One” is the one in which Parzival, Art3mis, and Parzival’s best friend and protector, an avatar named Aech (pronounced H), who resembles a metalloid cross between Vin Diesel and Shrek, enter the Overlook Hotel from “The Shining.” The reason they’ve gone there is that they’re trying to track down the woman who James Halliday (Mark Rylance), the disconnected nerd-genius inventor of the OASIS, once had a date with and nearly kissed. It turns out that the two went out to the movies (they went to see “The Shining”), and as the characters in “Ready Player One” stroll around on the sets and images from Kubrick’s film, it’s ticklish, after an hour or so of slippery mutating synthetic digital imagery, to envision “virtual reality” as something that’s this iconic and analog and concrete.

Aech winds up next to the Overlook’s infamous Art Deco elevators, slipping and sliding around in the jellied blood that pours out of them, and that’s before he ventures up to Room 237. The black-and-white New Year’s Eve photograph that pictured a tuxedoed Jack Nicholson now features, in his place, James Halliday, and Art3mis is able to make contact with Halliday’s date, which results in our heroes getting one of the three keys they need to win the game. Yet when that victorious moment happens, it’s a bit of an anti-climax. In “Ready Player One,” everything you could call virtual is clever and spellbinding. Everything you might call reality is rather banal.

If Wade can win the three keys, he’ll unlock the hidden Easter Egg that Halliday tucked inside the OASIS and inherit Halliday’s empire, worth half a trillion dollars; he’ll also gain control of the OASIS itself. Competing for the same prize is Nolan Sorrento (Ben Mendelsohn), a corporate weasel who’s the head of Innovative Online Industries (I.O.I.), a company that wants to dominate the world. Ernest Cline, the Austin novelist who wrote the 2011 novel on which “Ready Player One” is based, and co-wrote the screenplay as well (along with Zak Penn), packs in the geek references — and not just the stated ones (Hot Pockets! John Hughes! Robotron! Beetlejuice! Chucky!) but the fact that Halliday is a kind of Steve Jobs crossed with Willy Wonka. Or the way that the OASIS, an escape valve from the world, isn’t just a projection of what VR might one day become but a metaphor for how people relate to the Web right now.

Yet the contradiction of a video-game/VR movie is that games are, of course, awesomely immersive, whereas a movie about games is more akin to watching somebody else play one. The hoops that Wade and his team have to jump through to win each key feel arbitrary, like rules made up as the plot goes along, and you wish there were a greater sense of intrigue to it. The movie has more activity than it does layers.

Eventually, we meet the real-life people behind the avatars. Art3mis is really Sam, played by Cooke as a pensive redhead made shy by her birthmark, and Aech, though still called Aech, is played by the spiky and ebullient Lena Waithe, from “Master of None.” The one actor who gives a genuine crafted performance is Mark Rylance, who plays Halliday as a spooked angel trapped inside his frizzy head. We see slices of his past, including his fateful break-up with the partner, Ogden Morrow (Simon Pegg), who launched the OASIS with him. Yet all of this adds up on paper without ever seeming like more, in the movie, than a frame on which Spielberg can hang his eruptive visual imagination. “Ready Player One” is set in a dilapidated future where fantasy rules because reality looks hellish by comparison. Yet the movie puts you in a different mindset. By the end, you’re more than ready to escape from all the escapism.