Director David Mackenzie picks up where 'Braveheart' left off, following the Scottish leader who led the fight for independence following William Wallace's death. 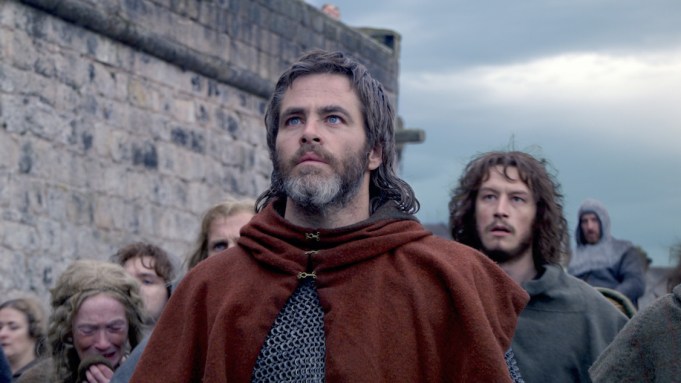 Someone at Netflix must love movies, because they keep on making them: massive, large-canvas sagas that beg to be witnessed on the big screen — like Alfonso Cuaron’s “Roma” (shot on 65mm) and Martin Scorsese’s upcoming “The Irishman” (whose budget has reportedly swollen past $140 million) — even if virtually everyone who does see them winds up doing so on the plasma TV, or laptop, or iWatch, or whatever. Picking up where “Braveheart” left off, “Outlaw King” tells the story of Robert the Bruce, the Scottish leader who invoked the memory of fallen rebel William Wallace, “Remember the Alamo!” style, on his way to reclaiming Scotland’s independence.

The project is David Lean grand and deserves — nay, demands — to be viewed in theaters, so vast is the spectacle of this bloody, mud-covered bonanza, featuring crowds of grubby early-14th-century Scots rising up against their English occupiers (Netflix touts that possibility when it releases the film Nov. 9, two months after its premiere on opening night of the Toronto Film Festival). Only there, beamed onto walls as tall as castles, can audiences take in the staggering look of this ultra-high-definition, ultra-widescreen production (shot with anamorphic lenses on the Panavision Millennium DXL in 8K), and only in that format will they look past its more obvious shortcomings as a piece of entertainment. Because whatever its value as rabble-rousing historical reenactment, “Outlaw King” never quite compares to the many films it’s so keen to imitate, and in some cases outright quote.

Certainly, it proves the scale of Netflix’s ambition — for audiences, for Oscars, for legitimacy — shared and shouldered by Scottish director David Mackenzie, who reunites with “Hell or High Water” star Chris Pine, his blue eyes blazing from behind wind-blasted cheeks and a stiff gray beard, for this epic undertaking. Never one to make the same movie twice, Mackenzie trades the spare, terse lyricism of that best picture nominee for a sprawling ensemble pageant in which roughly a quarter of the shots seem to have been captured by helicopter from half a mile away (à la “Lord of the Rings”), another half are plunged right into the thick of the turmoil (clearly inspired by the brutal Arikara attack that kicks off “The Revenant”), with whatever change remains given over to dreary dealings between English king Edward I (Stephen Dillane) and his various subjects — among whom Robert counts himself, if only for a brief time.

“Outlaw King” opens in a military tent where Edward has assembled Robert and other nobles to accept a truce and pledge their loyalty to English rule. A helpful bit of on-screen text explains that Scotland had been recognized as its own country until its last king died, leaving the way clear for Edward to sweep in and seize control. There was resistance, of course (see “Braveheart” for details), but by the scene in question, the so-called Hammer of the Scots had every reason to believe he had vanquished the rebels. And so we get a roughly eight-minute “oner” — a single-shot power play that Mackenzie caps with an awesome show of might: Edward demonstrates his latest weapon, a giant catapult (the 14th-century equivalent of a nuclear bomb) he uses to blast the nearest castle … but is never to be seen or deployed again.

Edward isn’t the only one showing off here. So, too, is Mackenzie, who wants his audience to know that he’s swinging a bigger sword than all those stodgy historical dramas that have come before — movies like “A Man for All Seasons” and “Becket” that are sometimes shown in class but seldom viewed for pleasure. The appeal of “Outlaw King,” by contrast, is that it’s thoroughly R rated (or will be, once the MPAA gets a look at it), full of sword-to-sword, spear-to-the-skull combat for war-movie mavens, and something like 15 seconds of full-frontal Chris Pine scenery for his fans. The carnage should sell itself, but will Netflix users sit through nearly two and a half hours for a flash of celebrity flesh? Cynically speaking, not only are the content company’s algorithms telling it yes, but it’s counting on thousands of new members signing up just for the privilege.

Frankly, if it weren’t for the chemistry between Robert and his second wife, Elizabeth de Burgh (Florence Pugh, following up “Lady Macbeth” with another formidable role with more than just pretty costumes on offer), “Outlaw King” would be a dreary chore to sit through. As it is, there’s far too much testosterone swirling about, easily half of it contained in Aaron Taylor-Johnson’s maniacal performance as Robert’s ally James Douglas. The “Kick-Ass” star is barely recognizable in his grimy disguise as a John the Baptist-like wild man, though Mackenzie has a talent for eliciting career-best performances from his cast (Ewan McGregor in “Young Adam,” Jack O’Connell in “Starred Up”), and Pine and these two co-stars stand out from an ensemble that can otherwise be hard to keep straight.

That’s because the director, together with co-writers Bash Doran and James MacInnes (plus “additional writing” by Mark Bomback and David Harrower), hasn’t succeeded nearly as well in conceiving this project as he has in mounting it — which is to say that on one hand, “Outlaw King” feels terribly oversimplified, while on the other, it still fails to connect on a basic character level. Unlike Mel Gibson’s broader but far more engaging portrait of William Wallace, this movie never quite musters the same underdog appeal.

The Robert the Bruce portrayed here is an inconsistent character, surrendering one moment, stabbing his rival in the face the next; marrying for political advantage rather than romance, then making sensitive love to his bride an indeterminate time later; running from conflict when he is outnumbered, only to orchestrate an improbable confrontation in which roughly 500 Scots face off against more than 3,000 English troops.

That latter skirmish, the Battle of Loudon Hill, provides the climactic showdown Mackenzie needs, even if it hardly marked the end of Robert’s fight for independence. This is the Scotland-proud director’s version of the “Saving Private Ryan” Normandy Beach invasion — with DP Barry Ackroyd’s hi-def camera embedded deep amid the carnage — but the effect isn’t nearly as impressive. Though undeniably bloodier, this standoff comes closer to the inelegant mayhem of Antoine Fuqua’s “King Arthur” (compromised by its PG-13 rating) or Ridley Scott’s “Kingdom of Heaven” (cut beyond all comprehension), with men in muddy chain-mail tunics impaling one another while dozens of horses fall, in wincing close-up, into trenches lined with pikes.

By this point, Edward has died of natural causes and his malcontent, bowl-cut son (Billy Howle) has taken charge, desperate to prove himself in a campaign that will take decades more to play out. It’s fascinating to compare not only the speeches that Robert and the king’s heir give before heading into combat, but also Robert’s words with those Gibson’s Wallace delivers in “Braveheart.” So much has changed in nearly a quarter century’s time that Mackenzie’s idea of blockbuster heroism robs his “Outlaw King” of the bombastic pep talk that would have been de rigueur for a studio movie. Heck, so much has happened in the last 24 hours (the film premiered within a day of a New York Times op-ed suggesting an outlaw insurgency rising within the Trump administration) that one wonders how audiences two months from now will perceive this rebel rallying cry.