Sandra Bullock leads a heist caper that's clever enough to get by and sly enough to treat its female cast as a natural spin on the 'Ocean's' brand. 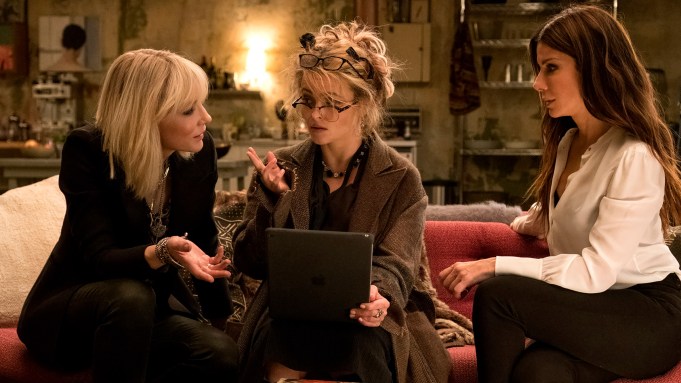 In “Ocean’s 8,” Debbie Ocean (Sandra Bullock), a tough cookie who’s all raccoon eyes, ironically pursed lips, and long stringy black hair, gets paroled from prison with hardly a dollar to her name. The moment she’s on the streets of New York, she devises a way to walk out of Bergdorf Goodman with a bagful of beauty products and then walk into a luxury hotel room. Right off, we grasp the essential thing there is to know about Debbie: She’s got what it takes to take what she needs.

Debbie, of course, has larceny in her blood. She’s the kid sister of Danny Ocean, who from all apparent indications is deceased. Out of the slammer, where she has spent several years serving a sentence for fraud (which resulted from her former partner in love and crime turning evidence against her to save his own skin), Debbie wastes no time rounding up a veritable sisterhood of thieves, charlatans, hackers, and hustlers, all to pull off a heist that’s just impish and elaborate and “perfect” enough to leave the audience gratifyingly tickled.

On the scale of Rube Goldberg ingenuity, it’s not the most dizzying or outrageous heist you’ve ever seen; it doesn’t scale the rafters of high-wire insanity the way the one in “Ocean’s Eleven” did. (Then again, what has?) But it’s clever enough to get by. It leaves you with that classic head-spinning “Ocean’s” feeling of “Yep, I bought what I just saw,” even when your head stops spinning enough to tell you that what you just saw is a pleasantly preposterous mission impossible.

You could say, and you’d be right, that the concept of the heist in “Ocean’s 8” carries a distinctly feminine flavor. Debbie and her crew launch a plot to infiltrate the most fabulous New York party of the year, the Metropolitan Museum of Art’s annual Gala, and to steal a legendary Cartier necklace, the Toussaint (named for the jeweler’s most fabled designer), that’s constructed out of $150 million worth of antique diamonds. The piece slips all too neatly around the neck but still looks like what it is: more than six pounds of elegant ice.

The Met Gala, an event so posh that it’s pronounced gah-la, is a star-studded cluster bash that sounds like it could have been the setting for a “Sex and the City” Cinderella fever dream. In the movie, its cachet is bolstered with cameos from the likes of Anna Wintour, Heidi Klum, and Katie Holmes, and that draped lattice of jewelry, if viewed from the proper princess angle, is certainly the stuff that dreams are made of.

Yet one of the sly jokes of “Ocean’s 8” is that the crooks in question pull off their “feminine” version of a heist not because they care (much) about the la-di-da trappings of glamour, but because they’ve got a hardened knowledge of how those trappings play out in the real world. That gives them a distinct advantage. When Daphne Kluger (Anne Hathaway), the evening’s beaming celebrity guest of honor, who’s wearing the Toussaint necklace, is made ill by the vegan soup she’s eating and has to stumble into the ladies’ room to throw up, only to emerge without the necklace, there’s more than a bit of girls’-club wiles at work in the logistics of the deception. (They hinge on men not being allowed in the ladies’ room, which is no mere rule. It’s chivalry.) “A him gets noticed,” says Debbie. “A her gets ignored. For once, we want to be ignored.” And why not? When you’re stealing a mound of jewelry that’s worth more than Mr. Big’s portfolio, who wouldn’t use every advantage under the chandelier?

In a better world — the one that’s now arriving like a locomotive but isn’t completely here yet — the notion of doing a “gender-flipped” remake of, or sequel to, a beloved Hollywood movie wouldn’t seem innovative or audacious or a challenge to the status quo. It wouldn’t seem like anything more than the most natural thing in the world to do.

Yet two summers ago, when our moviemaking system gave the concept a walk-around-the-block tryout with the all-female remake of “Ghostbusters,” the result was an unfortunate debacle — not because the film itself was so bad (though let’s be honest: For all the wicked talent of its stars, Melissa McCarthy and Kristen Wiig, it never did figure out how to do a new version of Bill Murray’s standing-outside-the-frame absurdist snark), but because the vicious hostility it inspired represented a full-scale volcanic eruption of on-line misogyny. Whatever one’s opinion of the movie, the trolling basically came down to a single toxic thought: Women have no right to be remaking “our” favorite ’80s bro comedy!

The first thing to say about “Ocean’s 8” is that it takes the bad karma that clung — unfairly — to the “Ghostbusters” remake and leaves it out in the trash. For here’s a gender-flipped sequel that not only works just fine, but renders the whole “novelty” of the concept a borderline irrelevance. A crew of women teaming up to boldly go where so many male-dominated heist teams, from “Rififi” to “The Italian Job” to the “Ocean’s” films, from “The Asphalt Jungle” to “The Town” to “Logan Lucky,” have gone before? Unless you believe that men possess some innate talent for sneakiness that women don’t, what could be more overdue? In “Ocean’s 8,” Debbie and her team come together and devise their jigsaw puzzle of a heist with an aplomb that feels as natural as it is crowd-pleasing.

That said, this is still, despite the freshness of the casting, the fourth “Ocean’s” film, and so the whole gathering-of-thieves storyline, and the sleight-of-hand fakery of the heist, doesn’t summon the rush of delighted surprise it once did. If anything, we’ve seen these sorts of movies once too often, and Gary Ross, the director and co-writer of “Ocean’s 8,” though he does a smooth job of keeping all the balls in the air, never conjures that Soderbergh sensation of taking this juggling act into the realm of gravity-defying virtuosity. The heist is fun and convincing without being dazzling, and some of the most amusing stuff in the film is just character comedy — like the deadpan joshing of Debbie and her old comrade-in-crime, Lou (Cate Blanchett), or the attempt by Rose Weil (Helena Bonham Carter), a flaked-out ’80s relic of a fashion designer, to woo Daphne into allowing her to dress her for the Gala.

Rihanna, as a rasta-hatted hacker and surveillance wizard known as Nine Ball, and Awkwafina, as a master street grifter, both make their presence felt — they’ve got surly bravado to spare — but you wish that some of the other roles (in fact, most of them) popped a bit more. Sarah Paulson, as a cheery thief of a suburban mom, and even the great Cate Blanchett, so game for amoral games, don’t get a chance to create indelible characters. (They don’t get enough good lines.) Anne Hathaway, however, is commanding at every moment; even her red-carpet myopia has awareness.

An “Ocean’s” movie is all about the heist, to be sure, but the exhilarating beauty of “Ocean’s Eleven” is that it was a screwball buddy comedy, as well as a romantic comedy, all vibrating through the tossed-off intricacy of the robbery. “Ocean’s 8” doesn’t take wing in that way. Debbie’s motivation for the crime, apart from the prospect of getting her team members $16.5 million apiece, is to take revenge on Claude Becker (Richard Armitage), the art-gallery swell and former lover who ratted her out. “Why can’t you just do a job?” asks Lou of Debbie. “Why does there always have to be an asterisk?” But in “Ocean’s 8,” there actually isn’t enough of an asterisk. The movie goes on for a good long while after the heist is complete, and though James Corden has a scene-stealing naughty puckish glee as an insurance-fraud investigator, the vengeance plot plays out in a way that’s more action-film conventional than diabolically ingenious.

Then again, the film’s real asterisk is its gender celebration. Sandra Bullock strides through this movie with the debauched insolence of a hungry criminal who has elevated thievery into an ideology. Her Debbie doesn’t just want to be rich; she wants to be spiritually sprung, under no one’s command. “Somewhere out there,” Debbie tells her team, “there’s an 8-year-old girl dreaming of becoming a criminal. You’re doing this for her.” “Ocean’s 8” is a casually winning heist movie, no more and no less, but like countless films devoted to the exploits of cool male criminals, it lingers most — and not just for 8-year-olds — as a proudly scurrilous gallery of role models.