The fifth 'Jurassic' movie is the first that pretends to be more than a ride. It's the film's dinosaur action that still rules, though maybe not enough. 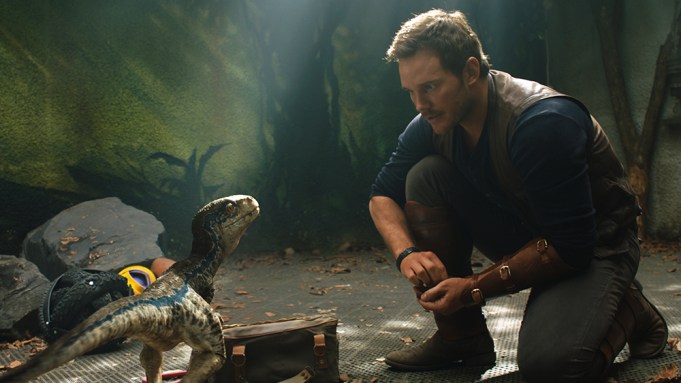 Where have all the dinosaurs gone? That’s a question that may occur to you during vast stretches of “Jurassic World: Fallen Kingdom,” the fifth entry in the “Jurassic” series, and the first that plays less like a thunder-lizard spectacular than like a ’70s disaster movie run amok. Oh, don’t get me wrong: The film provides plenty of encounters with our stomping, gnashing primeval-beastly friends — yet for much of “Fallen Kingdom,” they are caged, shackled, sedated, wounded, and otherwise subdued. They’re right up there on screen, but too often they don’t feel like the main event.

On Isla Nubar, site of the now-decimated Jurassic World theme park, a billowing volcano is about to erupt and consume the island. Owen Grady (Chris Pratt), that hearty bro of a raptor whisperer, and Claire Dearing (Bryce Dallas Howard), the former park manager who now leads a dinosaur-rights activist group, have come to rescue the dinosaurs that still roam there by taking them to a new sanctuary. They’ve been hired by Eli Mills (Rafe Spall), the majordomo of the Lockwood estate. It turns out, though, that he’s using them for their tracking system and has other, more sinister plans for the dinosaurs’ future.

On the island, we get token glimpses of the dinosaurs in and out of action. “I want to see this!” shouts one of Claire’s workers, climbing out of a jeep to stare up at a brachiosaurus, in a shot that takes us right back to that very first sighting in “Jurassic Park”: the moment that launched the age of digital cinema into orbit. There’s a nifty Spielbergian prelude that features a ginormous set of underwater jaws, and Owen wakes up in a daze to find himself being licked by the dripping tongue of a triceratops. At one point, Owen and Claire draw blood from a caged and sleeping T. rex, scrunching up against its fearsome head; there’s a poignant shot of a brachiosaurus being left on the island to be consumed by smoke and lava. And let us not forget Blue, Owen’s favorite velociraptor, who’s the most anthropomorphic of them all — a keenly intelligent specimen who, with her slight smile, looks like a cross between a domesticated T. rex and E.T.

Yet it must be said that none of these moments produce a hint of the awe, the gargantuan fairy-tale wonder and surprise, that has sustained the “Jurassic” franchise for 25 years. Spielberg’s original “Jurassic Park” had a storyline that was more functional than inspired, but it worked as a frame on which the director could hang his brilliantly imagined, breathlessly choreographed stomping-reptile magic.

The movies, after Spielberg’s 1997 sequel, have declined steadily in quality — “Jurassic World,” in 2015, was an orgy of deadly overkill, all prose and no monster-fantasy poetry — so it makes sense, in a way, that “Fallen Kingdom” adopts a new strategy. It doesn’t pretend to wow us as if the sight of digital dinosaurs were still eye-poppingly unprecedented and amazing. It tries, instead, to tuck the dinosaurs into a busy and “topical” conspiracy adventure thriller. The movie was directed by J.A. Bayona, the Spanish filmmaker best known for the atmospheric 2007 horror movie “The Orphanage,” and though he does a competent job in “Fallen Kingdom,” keeping the action thrusting forward, there’s not much he can do to transcend the script (by Colin Trevorrow and Derek Connolly), which is a kind of furrowed-brow disaster-movie pastiche.

In the ’70s, if you went to see a film like “The Towering Inferno,” it was generally brimming with plot and character and even a social “theme” (that one had some malarkey about the recklessness of building too many skyscrapers), but really, everyone had come to see the people trapped in hellfire, the burning bodies crashing down in a trash spectacle of disaster porn. “Jurassic World: Fallen Kingdom” is a liberal pulp message movie, yet it treats itself with even more sobriety. The dinosaurs, it turns out, have been targeted by Mills to be sold off to the highest bidder — yes, it’s the first cautionary dinosaur-trafficking movie — and at certain points you may find yourself ticking off the themes. Greed gone rampant among the globalized gilded class? Check. The sinister potential of genetic engineering? Check. The need to protect endangered species? Check. The privatizing of military action? Check. The eerie implications of cloning? Check. The danger of weaponized dinosaurs? Check.

I didn’t find any of this stuff especially “fun,” though the cast members certainly treat the political/genetic/social fodder as if it meant something. Chris Pratt tones down the dude factor and exudes a lean-and-mean sincerity, and Bryce Dallas Howard projects a luminous concern for God’s ancient revived creatures. Justice Smith, as a tech geek in aviators who is scared, almost mythologically, of being in the same room as a T. rex, comes on like a nerd version of Will Smith (no relation), and he’s intensely appealing.

The movie culminates in a dinosaur auction scene that carries echoes of “King Kong,” but it just makes you wish that the air of poignance surrounding these creatures were more sustained. At this point, a “Jurassic” movie needs its dinosaurs to be both victimized innocents and giant-teeth-gnashing predators, and there’s something hackneyed and opportunistic about the facile (if not mindless) way that “Fallen Kingdom” switches back and forth between those two modes.

The film takes a long time to build up to its climactic battle with an Indoraptor, and it’s effectively done, but it’s nothing we haven’t seen before — and when it arrives, you realize that this is what these films will always, at heart, be about: not “social responsibility” but monsters who want to eat us. The first “Jurassic World” was, quite simply, not a good ride. “Fallen Kingdom” is an improvement, but it’s the first “Jurassic” film to come close to pretending that it isn’t a ride at all, and as a result it ends up being just a so-so ride. I hope the next one is an all-out ride — but that for the first time since Spielberg’s 1993 original, it’s actually a great one. The audience for this series has proved that it will turn out in mega-droves. But it deserves more than a passable rerun taking itself too seriously.