Brad Bird's sequel to his superhero-family Pixar classic doesn't build on the first film so much as dutifully replay it. It's fun, but far from incredible. 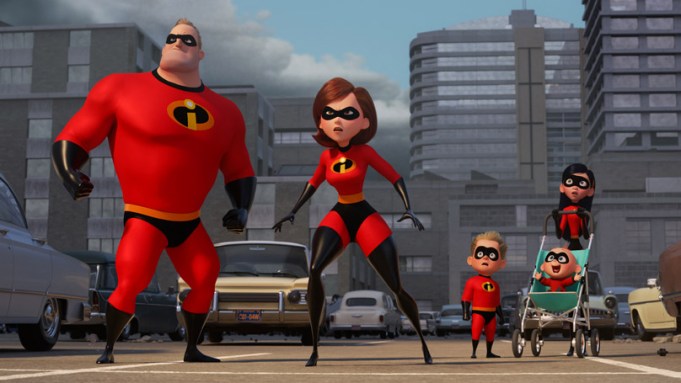 We’ve been swimming in movie sequels for close to 40 years now. Yet for all the deluge of cinematic déjà vu, all the middling rehashes and (yes) the fun, rousing, and genuinely imaginative second, third, or fourth chapters, there is one category of Hollywood sequel that remains so elite — and so rare — that we hardly even think about it. And that’s the sequel to an unabashedly great movie.

I don’t mean great in the fanboy sense of “Did you see [fill in the title of the last Marvel film] ? It was great!” I’m not even talking about beloved popcorn touchstones like “Die Hard” or “Scream” or “The Bourne Identity.” I’m talking about movies of singular and awesome artistry, like “The Godfather” or “Star Wars” or “Night of the Living Dead” or “Toy Story.” When a sequel gets made to one of those, it’s axiomatic that you want — and almost expect — it to be a great movie, too. For if that isn’t the standard, then what is?

The movies listed above all got the sequels they deserved (“The Godfather Part II,” “The Empire Strikes Back,” “Dawn of the Dead,” “Toy Story 2”). In the case of each follow-up, the original film’s vision was sustained, enhanced, even enlarged. And I don’t think it’s too much of a stretch to say that many viewers will be hanging that same desire for greatness on “Incredibles 2.”

That’s because “The Incredibles,” which came out 14 years ago, was an extraordinary movie — an instant Pixar classic, bedazzling and humane, a virtuoso act of computer-animated showmanship that spoke about things like work, family, ego, and the passion of ambition in ways that few Hollywood movies have before or since. Written and directed by Brad Bird, it was a superhero comedy of daffy corkscrew wit; the most poetically extravagant action caper since the James Bond ’60s; a portrait of middle-class American domestic life that took in its joys and its perils; and the most exquisitely designed animated feature since “Yellow Submarine.”

That’s a lot to live up to, and I wish I could say that “Incredibles 2,” which Bird also wrote and directed, is the great sequel “The Incredibles” deserves. It is not. It’s got a touch of the first film’s let’s-try-it-on spirit, and it’s a perfectly snappy and chucklesome and heartfelt entertainment, with little retro felicities you latch onto, yet something is missing: the thrill of discovery — the crucial sensation that the movie is taking us someplace we haven’t been.

“Incredibles 2” offers a puckishly high-spirited but slightly strenuous replay of the original film’s tale of a superhero family working to prove its relevance. Once again, the family’s members are on the cusp between humdrum domesticity and saving-the-world bravura. Yet what was organic, and even obsessive, in the first outing comes off as pat and elaborate formula here. The new movie, energized as it is, too often feels like warmed-over sloppy seconds, with a what-do-we-do-now? riff that turns into an overly on-the-nose plot.

A decade and a half ago, before the Marvel/DC juggernaut was fully upon us, Bob Parr (Craig T. Nelson), a.k.a. Mr. Incredible, the steel-muscled strongman with a face like an Atomic Age Picasso, was forced to hide out as a morose (and doughy!) insurance actuary, while Helen Parr (Holly Hunter), the rubber-limbed Elastigirl, played ’50s housewife with their superkids, Violet (Sarah Vowell) and Dash (Spencer Fox). All of them had to conceal their powers as if they were criminals, but by the end of “The Incredibles” they had proved that a family of superheroes could rock the world.

“Incredibles 2” begins — literally — right after the end of the first “Incredibles,” with the family fighting a throwaway villain and his giant whirling destructo screw. Yet in the years since, the cult of the superhero has all but taken over the culture, which is one reason why “Incredibles 2” was likely greenlit. So it feels a little off-kilter to realize that superheroes, in “Incredibles 2,” are still illegal, and that the Parrs are living like refugees, holed up in the Safari Court Motel. As a concept, the reset never fully gels. It’s a convoluted way of rehashing the first film (with less pizzazz) instead of building something new on top of it.

Winston Deavor (Bob Odenkirk), the smiley head of a telecommunications company, is a superhero fan who wants to help bring supers back. He calls forth Elastigirl to join him on his mission, enlisting her to commit public acts of crime-fighting — like stopping a runaway train — that he will then go out and publicize. This sticks Bob at home with the kids, where he discovers that playing Mr. Mom is more of a juggling act than he thought; it leaves him mirthless and sleep-deprived. Meanwhile, there’s a sinister cyber-villain on the loose called the Screenslaver, who uses computer screens and goggles to turn everyone — including the superheroes assembled by Winston — into obedient hypnotized drones.

Each story point hits us with its overly calculated “relevance.” Bob’s awkwardness as a nurturer in the brave new world of dads-as-homemakers; Helen’s proud post-feminist advancement over her husband; the ominous threat of whatever comes through the computer screen — it’s all a bit too thought out, and maybe a tad behind the curve. In “The Incredibles,” the thriller plot was the vehicle through which the Parrs discovered the meaning of using their powers: of being themselves. In “Incredibles 2,” they save the day once more, but emotionally they’re just going through the motions.

It’s true that the “Toy Story” films, all three of which are fantastic, did variations on the same theme of a toy’s obsolescence, but as movies they kept the emotions close to the surface. In “Incredibles 2,” we never get that rush of feeling. Yet Brad Bird, who once again voices Edna the sawed-off Teutonic fashionista, hasn’t lost his wizardly gift for orchestrating a sight gag. The Parrs’ youngest child, Jack-Jack (Eli Fucile), with his infant tuft of hair that’s like a single devil horn, revealed his superpower near the end of “The Incredibles” (when he caught fire and morphed into a purple ogre), and in “Incredibles 2” he’s got that and other powers to spare, from levitation to laser vision. Is he the film’s reigning crowd-pleaser? You bet. I wouldn’t be surprised if there was a movement to give him his own sequel. But that, even if it happened, would have very little to do with what made “The Incredibles” incredible.