Real magic is in short supply in this cluttered expansion of the "Harry Potter" franchise. 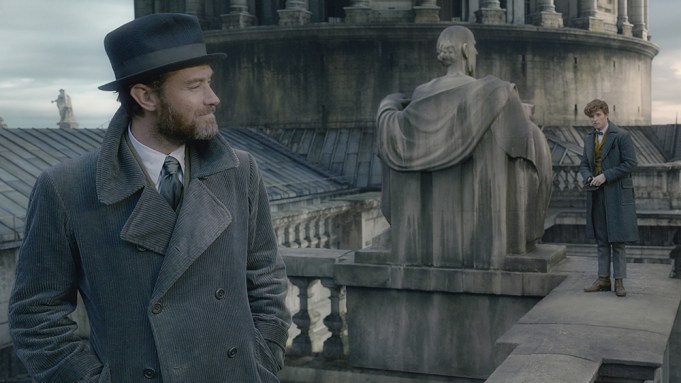 To start with, some credit where it’s due: In the nearly half century since the death of J.R.R. Tolkien, no writer of the English language has created a more pliable, tangible, and livable fantasy world than J.K. Rowling. And save for Peter Jackson’s sojourns to Middle Earth, no recent filmmaker has put in a more tireless shift translating such literary plenitude into comprehensible feature films than David Yates, who corralled the mammoth last three “Harry Potter” tomes into four hugely satisfying blockbusters and put a decent foot forward with the first of five planned prequels, 2016’s uneven yet promising “Fantastic Beasts and Where to Find Them.”

Unfortunately, even the most meticulous world-building is only half the journey; you still have to populate that world with real characters and compelling stories, and it’s that second half of the equation that comes up missing in “Fantastic Beasts: The Crimes of Grindelwald.” The noisiest, most rhythmless, and least coherent entry in the Wizarding World saga since Alfonso Cuarón first gave the franchise its sea legs in 2004, “Grindelwald” feels less like “The Hobbit” than a trawl through the appendixes of “The Silmarillion” — a confusing jumble of new characters and eye-crossing marginalia. Most of the surface pleasures of filmic Potterdom (the chiaroscuro tones, the overqualified character actors, the superb costuming, James Newton Howard’s warmly enveloping score) have survived intact, but real magic is in short supply.

Set in the late 1920s, the film picks up with the adventures of obsessive magizoologist Newt Scamander (Eddie Redmayne) as he prepares to take on the rising dark wizard Gellert Grindelwald (Johnny Depp, doing Johnny Depp things), whom he helped apprehend in the first film, and who promptly escapes from the clutches of the American wizards in a prologue here. A wizard supremacist blessed with a golden tongue, Grindelwald hopes to spark a populist movement to subjugate the world’s non-magical population, and seeks a key ally in the gifted yet troubled Credence Barebone (Ezra Miller), whom he tracks to Paris. Newt, though no fan of the regional authorities and loath to pick a side, is finally persuaded to help the good guys find Credence first.

As a protagonist, Newt has always had a big robe to fill, with his good-natured nerdery no easy replacement for Harry Potter’s more universal adolescent sturm und drang. (Like the first “Fantastic Beasts,” this film is scripted by Rowling.) Here, the character begins to fill in some of its hazier outlines, with Redmayne more willing to play up the prickly side of Newt’s monomania, rather than straining for audience approval. Yet the filmmakers hardly seem to trust him to carry the story alone, and he’s perpetually being shuffled off the main stage to allow a traffic pileup of supporting characters to play out their proscribed micro-dramas.

The best of the bunch, once again, is the illicit muggle-mage coupling of Jacob (Dan Fogler) and Queenie (Alison Sudol), who burst into the film’s early stages like an enchanted Tim Curry and Bernadette Peters, only to quickly break up. Then there’s Grindelwald, bloodily setting up his headquarters in Paris and tasked with keeping a whole cadre of henchpeople (Kevin Guthrie, Poppy Corby-Tuech, David Sakurai) in line. There’s also the think-piece-waiting-to-happen Nagini (Claudia Kim), an Indonesian Maledictus imprisoned in a traveling freak show, who escapes and joins up with Credence on her long journey toward eventually becoming Lord Voldemort’s slithering companion. In hot pursuit of the pair, separately, are a bowler-hatted bounty hunter (Ingvar Eggert Sigurosson) and a mysterious French-Senegalese dandy named Yusuf Kama (William Nadylam).

Newt also navigates no less than three simmering romantic entanglements. First, there’s his mousy assistant Bunty (Victoria Yeates), who quietly pines for him as she tends to his beastly menagerie. Then there’s his charged friendship with onetime schoolmate Leta Lestrange (Zoë Kravitz, a standout), who inconveniently happens to be engaged to Newt’s studlier brother Theseus (Callum Turner). And last there’s his standoffish romantic tension with newly reinstated auror Tina Goldstein (Katherine Waterston, suffering a mild case of Petrificus Totalus). Only slightly less flirtatious is Newt’s relationship with former teacher Albus Dumbledore, winningly played here as a strapping young Defense Against the Dark Arts professor by Jude Law, channeling just the right amount of Michael Gambon’s aloof mischief and rocking a waistcoat better than any Englishman this side of Gareth Southgate.

Most of these characters — and several more besides — find their way to Paris, which has its own magical underworld full of wild street carnivals and unhelpful bureaucrats, and which scarcely seems big enough to contain the sheer mass of personalities, each with their own secrets to unfurl. Yates, previously so successful at navigating multiple contemporaneous storylines, here just darts from one to the other with all the grace of a malfunctioning snitch, and it’s hard to suppress a weary sigh when one of these threads starts to build up a head of steam, only for Yates to jarringly cut back to some scarcely glimpsed new character stopping to explain his knotted personal ancestry over a cup of tea.

The film throws plenty of plot twists, loud noises, and multihued magical nebulae at us, but rarely is there much tension, or sense of adventure, or any real longing, just the feeling of watching one chess piece after another being moved into position. The “Harry Potter” saga also risked growing overloaded with plot machinations in its closing episodes, but that series had on its side the intense investment its audience had developed watching those characters grow up — and in many cases, growing up along with them. “Fantastic Beasts” assumes a similar level of engagement with its swollen dramatis personae, without allowing the time or putting in the work to earn it, and this definitely shows in the latter stages of “Grindelwald,” where several dramatic revelations land with bizarrely little impact. Indeed, it’s not until the film makes a return to one very familiar setting midway through that it manages to capture the warm frisson of the old days — not coincidentally, it’s also the first time the film takes a minute to really stop and breathe.

As with its predecessors, “Grindelwald” sees Rowling continue to explore her underlying interest in the vicissitudes of racism and totalitarianism, at times explicitly invoking real-life horrors of the 20th century. But part of the genius of the “Harry Potter” series’ slow political awakening was Rowling’s innate ability to shadow-play genuinely complex ideas in appreciably kid-friendly terms. (“Order of the Phoenix’s” Dolores Umbridge offered as solid a primer for the works of Hannah Arendt as a middle-schooler is likely to find, and the travails of the Daily Prophet work nicely as a pocket history of the Murdoch empire.) Her allegorical abilities are more muted here, with the divisions between good and evil even starker, and Grindelwald’s blood-and-soil philosophies seeming less an interpretation of historical or present-day fascism than simply a thin, unimaginative echo.

It’s still quite early in the “Fantastic Beasts” saga, but it’s hard not to worry about the franchise heading in a similar direction.

Reviewed at Pacific Theaters at the Grove, Los Angeles, November 6, 2018.