Benedict Cumberbatch voices a persnickety but more relatable Grinch in a new version that (unlike Jim Carrey's) stays true to the Seussian spirit. 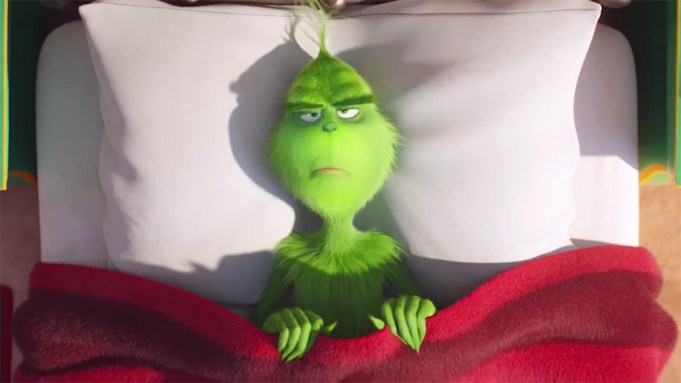 In an era when awards-bait films, and even junky FX-laden franchise fantasies of the week, are often half an hour too long for their own good, it’s worth recalling certain examples of pop-culture storytelling that were, in their way, miracles of brevity. The original 1931 “Frankenstein” has a fairly involved storyline (Dr. Frankenstein preparing to get hitched; his bringing to life of Boris Karloff’s creature; the creature learning to walk; the creature going out into the world; the day of the wedding; the pitchfork mob), yet the entire thing goes by in just 71 minutes.

And speaking of creatures who destroy things out of loneliness, “How the Grinch Stole Christmas,” the 1966 made-for-TV Dr. Seuss perennial, narrated by none other than Boris Karloff, also spins out a relatively busy yarn. The Grinch, in his gleeful squinty-eyebrowed humbug way, broods over this thing called Christmas, then dreams up an elaborate plot — you could almost call it a heist — to keep Christmas from coming. He goes out and raids every home in Whoville, all the while undergoing the stages of a relatively major psychological transformation, which comes to a head when he has his middle-of-the-night encounter with little Cindy Lou. Yet if you excise the commercials, the entire thing takes just 26 minutes to tell — though the tears of uplift it provokes (“In Whoville they say…that the Grinch’s small heart grew three sizes that day!”) are powerful enough to make you feel like you’re watching the tot version of “It’s a Wonderful Life.”

Ron Howard’s live-action remake of “How the Grinch Stole Christmas,” with Jim Carrey cutting loose in about 12 different ways as the furry Scrooge of Whoville, remains one of the most critically reviled Hollywood films of the past 20 years. Yet it was a major success story (the top-grossing movie of 2000). A lot of what critics hated about it, apart from the fact that Jim Carrey had finally worn out his welcome with them, came down to the idea that it took a television special that was the definition of kiddie perfection and weighed it down with a thousand  unnecessary and annoying bells and whistles. More — much more — became less.

In the bright and spangly new computer-animated fairy tale “Dr. Seuss’ The Grinch,” the same dynamic exists, at least in the abstract: A story born to be a succint marvel of Seussian narrative gets finessed and inflated into a feature-length movie. Yet there’s a crucial difference. The last thing that the film’s directors, Yarrow Cheney (“The Secret Life of Pets”) and Scott Mosier, want to be accused of is trashing a beloved classic again. So there’s a distinct sensation, in their visual and narrative embellishments, of the movie doing all it can to stay true to the look and feel and inner spirit of the 1966 special.

Does it add anything (apart from length)? Maybe not. As the special proved (and does year after year), perfection is perfection. Yet taken on its own terms (i.e., pretend that you’ve never encountered this story before, as countless children who see this movie won’t have), “The Grinch” is a buoyant and agreeable entertainment, with a lead vocal performance, by Benedict Cumberbatch, that doesn’t try to bend the story, the way Carrey’s performance did (or Mike Myers’ in the 2003 live-action “The Cat in the Hat”), toward some misbegotten goal of hellzapoppin’ dump-truck anarchy. Cumberbatch, in his droll and tasteful way, respects the grinchiness of the Grinch: that he’s a force of mischievous mayhem who represents something in all of us — the potential to be bad when unhappiness takes over.

There’s no denying, though, that this is a Grinch who’s a shade lighter in his acrimony (if not in his coloring; his fur is still seasick green), making him an ever-so-slightly more relatable misanthropic beetle-browed crank. Cumberbatch gives him an American accent and speaks quickly, with an addled officiousness; the sound is less Karloff, with his dark and booming British vowels, than Paul Giamatti at his most persnickety. That the Grinch is a self-isolated neurotic, making up for past trauma, is now front and center. Early on, he sits in his home playing “All by Myself” on a pipe organ whose pipes shoot up like a tangle of gold-plated pasta (he’s a soft-rock Phantom of the Opera), and there’s a funny montage of him indulging in a bout of “emotional eating.” He also gets a moment of joke-free backstory, one reminiscent of the lonely holidays that Ebenezer Scrooge spent as a boy in “A Christmas Carol.”

“The Grinch” has a visual design that’s savory in a tactile Christmas-specialty-store way. The houses of Whoville look as bendy and ramshackle as they did on the page, though they’re now charged with color, and the pristine snowscapes lend the movie a firmer sense of place; its Whoville could be the world’s funkiest ski resort. When the Grinch stands on the sliver of extended peak outside his doorway, surveying the town below, it’s like he’s perched on an abyss. At the same time, this is the first “Grinch” that gets you to feel that even in his estrangement, he belongs to the town; he’s a Who who lost his way. The Whos’ village-square Christmas tree is so ginormous it’s a marvel, and there are, of course, doses of the spectacular action-film slapstick required in any contemporary animated feature, most of it revolving around the logistics of the Grinch navigating his sleigh up and down those slopes.

Dr. Seuss’ famous doggerel has been replaced by a lot of imitation-Seuss doggerel, which works well enough, though there’s no great reason for it apart from the fact that the film has to offer something original or it wouldn’t have a reason for existing. That’s the eternal paradox of remake culture. We want a movie like “The Grinch” to push our nostalgia buttons, yet in a way that’s just fresh enough to delight and satisfy anew. The Jim Carrey version didn’t do that, and as popular as it was at the time, I seriously wonder how much it’s watched now. For anyone who grew up with “How the Grinch Stole Christmas,” “The Grinch” won’t replace it, yet it’s nimble and affectionate in a way that can hook today’s children, and more than a few adults, by conjuring a feeling that comes close enough. By the end, your own heart will swell, though maybe just one or two sizes.