Timothée Chalamet, as a young crystal-meth addict, and Steve Carell, as the desperate father who's out to save him, hit a true and touching note in a staid but authentic addiction memoir. 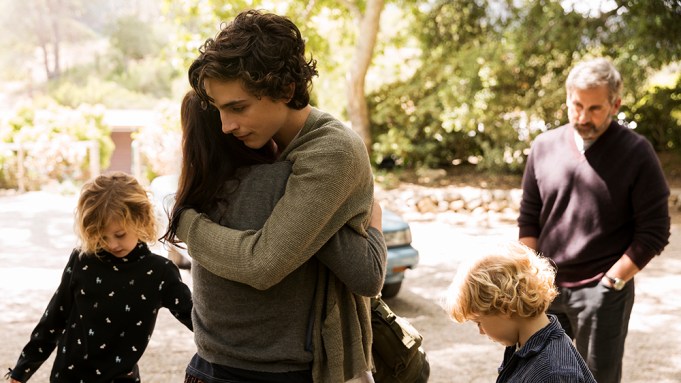 Addiction memoirs tend to have a grippingly unsavory, voyeuristic car-crash quality. That’s part of what lures us to them; so does the way that they can leave you thinking, “There but for the grace of God…” “Beautiful Boy,” starring Steve Carell and Timothée Chalamet, is based on a pair of best-selling memoirs by the San Francisco journalist David Sheff and his oldest son, Nic, that chronicled Nic’s descent into crystal-meth addiction. The movie puts the books together, dramatizing the perils of addiction from the inside and the outside. But mostly we see it from the outside. In essence, “Beautiful Boy” tells the story of David Sheff’s anguished but impotent crusade to snatch his son from the jaws of a life-crushing drug dependence.

The more the film goes on, the more he realizes he’s doomed to fail. Nic is still the son he adores, but the lust for drugs takes on a harrowing life of its own. “Beautiful Boy,” made by the Belgian director Felix Van Groeningen (“The Broken Circle Breakdown”), from a script he wrote with Luke Davies, is scrupulous and tenderly wounding — a drama that seizes and holds you. It’s a compelling movie whether or not it happens to speak to you personally, yet you can bet that a lot of people who have stood by and watched members of their families succumb to drug addiction are going to want to see it.

I don’t mean to make “Beautiful Boy” sound so public servicey, but that’s a crucial dimension of its appeal: It’s demonstrating to people who have been through this hell that they aren’t alone. Every last thing the movie shows us about addiction, and the effect it can have upon those who are trying to save an addict from himself, is entirely authentic. There’s no cut corners or fake sentimental beats, no fraudulent uplift factor.

Yet there’s a lot, maybe too much, that the film doesn’t show. Nic Sheff wrote about the combined degradation and excitement of the drug life (he descended quite far, to the point of prostituting himself for drug money), and very little of that is in the movie. That’s a choice the filmmakers made: to cut away the sensationalism, to leave out the grimy sordid details of what an addict’s existence becomes. Nic does meth, and starts to shoot it up, but without that street-grunge factor the movie lacks emotional electricity.

Carell and Chalamet both give excellent performances that should help to launch “Beautiful Boy” into the awards-buzz atmosphere. That said, there’s not a lot to the characters apart from their relationship to drugs, and so the film has a staid, repetitive quality. After a while, we realize that Nic is going to show up, looking a little more zoned-out and disheveled than he did before, and that David is going to do all he can to reach out to him, and that it probably won’t work. Then the cycle repeats itself, in slightly more desperate and harried form.

I wish “Beautiful Boy,” for all its honesty and skill, summoned the power to shock us. Yet part of the film’s strategy is to say that no movie can communicate the true inner essence of the drug life, which is what meth feels like in the bloodstream. That’s a sensation we have to imagine, and so Nic’s immersion in drugs isn’t, for the audience, about experiencing a vicarious high, or even gawking at the lows. It’s about watching a young man drift away from the people who love him because his spirit has gone underground.

No matter how many times you look at Timothée Chalamet’s face, it always surprises you. He’s the rare actor you could call handsome and beautiful at the same time, and his pale stretchy features seem to wrap themselves around the emotions he’s feeling — or, in this movie, the lies he’s telling. In “Call Me by Your Name,” Chalamet had a marvelous directness, but in “Beautiful Boy” he’s transformed — he makes Nic, in his muffled millennial James Dean way, skittery and self-involved to the point of being a little disconnected.

Is that why he loves drugs so much? The most fascinating aspect of the movie is that Nic, a child of divorce (he lives with his dad in the Bay Area and visits his mother in L.A. over the summers), is portrayed as a reasonably stable and happy dude who responds to the rush of crystal meth because, in his words, it turns his world from black-and-white to Technicolor. Standing in front of a rehab group, he says, quite simply, that it’s the best feeling he’d ever known, so he didn’t want to stop. Sometimes even a paralyzing addiction can begin that simply.

Yet when Nic, all strung out, is sitting with his dad in a booth at Café Beatrice, the diner they always used to go to, he lashes out at him, and it’s a devastating scene. He’s fried, and Chalamet reveals how those singed synapses have cauterized his heart. Carell plays David as a deeply loving but methodical man who starts to realize that he’s being held hostage, and there’s nothing he can do about it. He’s being taken over by the anxiety of knowing that his son could die at any moment, and Carell’s acting is urgent, imploring, silently haunted. Amy Ryan plays David’s ex-wife and Nic’s mother, Vicki, with a concerned testiness that results in frequent clashes, and Maura Tierney plays Karen, his second wife (they have two younger children), with a gravity that roots every scene she’s in.

In “Beautiful Boy,” meth becomes a religion that Nic can’t shake because he doesn’t want to. It’s not just that his body is hooked; the drugs have got their claws in his soul. So nothing works — not rehab, not going off to college, not pledging, as if his life depended on it (which it does), to stay clean. David loves his son more than anything, and the film keeps flashing back to his memories of Nic when he was younger. It’s his way of asking: Where did I do wrong? The movie tells the story of David’s road to accepting that he didn’t go wrong; he didn’t cause any of this. It just happened. To love his son, he’s got to do something even more difficult than saving him. He has to let him go.