Film Review: ‘Ant-Man and the Wasp’ 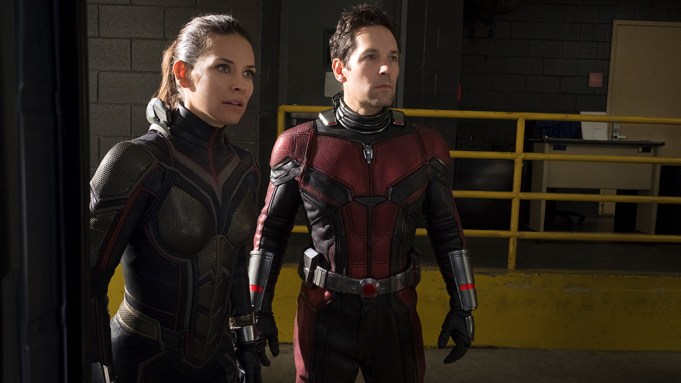 “Ant-Man and the Wasp” has a pleasingly breakneck, now-you-see-it-now-you-don’t surreal glee. It’s a cunningly swift and delightful comedy of scale, in which Scott Lang (Paul Rudd), that quipster mensch of a convict-turned-superhero (has there ever been a movie criminal this nice?), shoots around in his miniaturizing metal suit like the world’s tiniest gadfly, only to loom up as large as Godzilla. Either way, he always has time to deliver a line like “Do you really just put the word quantum ahead of everything?” The answer is: Yes. “Ant-Man and the Wasp” is a fantasy of mutating matter in which buildings collapse into Monopoly toys, a Hello Kitty Pez dispenser gets inflated into a freeway battering ram, and the most fearless of the characters is injected into an ocean of psychedelic sub-atomic protoplasm.

The director, Peyton Reed, also made the first “Ant-Man” (2015), but at the time he’d never helmed a special-effects blockbuster before, and his inexperience showed. He jammed comedy, action, and origin-story mythology into a film that had more amiable spirit than craft. In “Ant-Man and the Wasp,” Reed keeps the entire movie — one-liners, Macy’s Parade effects, hand-to-insect-wing combat — spinningly aloft. Always an inspired director of comedy (“Down with Love,” “Bring It On”), Reed has learned how to operate the heavy machinery of a Marvel superhero movie yet keep it all light and fast and dizzying. His combat scenes don’t overpower. They’re well spaced out and actually make visual sense, like a hypnotic one early on in which Hope van Dyne (Evangeline Lilly), a.k.a. The Wasp, confronts a pack of goons in a restaurant kitchen by popping in and out of micro size, sliding along the edges of a tossed carving knife only to burst into her full ninja self to deliver the knockout blows.

Yet part of the fun of “Ant-Man and the Wasp” is that you don’t have to pretend there’s anything cosmic at stake. How could you? The plot is an elaborate throwaway. Rudd’s Scott Lang is doing all he can to be a good divorced daddy to his daughter, Cassie (Abby Ryder Forston). As he lip-syncs — to the “Partridge Family” theme song! — and digital drums his way through his last few days of house arrest, he is lifted out of his predicament by Dr. Hank Pym, the physicist and former S.H.I.E.L.D member played, once again, by a triumphantly disgruntled Michael Douglas, in a silver coif and goatee, who bites down into the role of this cuttingly tormented science geek.

Hank won’t rest until he extracts his wife, Janet van Dyne (Michelle Pfeiffer), from the Quantum Realm, where she’s been miniaturized and living for 30 years (one hopes that they have Netflix, or at least QVC), ever since she sacrificed herself by going sub-atomic to defuse a bomb. Hank and their daughter, Hope, have built a tunnel that will theoretically transport them to the Quantum Realm. But the lab on which the project depends — it’s housed in a building that looks like a decaying steel-and-glass Hollywood talent agency — is also coveted by two forces of People We Don’t Want To Root For.

The first of them is Sonny Burch, a trafficker of black-market tech, played by Walton Goggins as the most unctuously literate of oily Dixie sleazehounds. Then there’s Ghost (Hannah John-Kamen), a quivering and alienated desperado who, after being damaged as a young girl in a lab accident presided over by her scientist father (a colleague of Hank’s), acquired the ability to phase through objects. Her powers are visually vivid yet a tad vague, and so is her goal: to use the lab to set herself free. John-Kamen plays her like a fallen member of the X-Men turned tremulous indie rock star.

Hank and Hope’s desire to reunite with Janet is certainly understandable, and Michelle Pfeiffer has a lovely, wistful presence, yet the plot of “Ant-Man and the Wasp” is just a MacGuffin, a frame on which to hang the hijinks. The movie is all jokes and movement, fused by the spirit of transmogrification. Scott, who went down to the Quantum Realm before, has a bit of a mind-meld with Janet, which means that in one scene Paul Rudd literally channels Michelle Pfeiffer, and hilariously. He does it by acting indelibly…sweet.

But even that’s just a momentary, let’s-try-it-on lark. The movie keeps referencing Ant-Man’s adventure in Germany, where he joined up with the Avengers in order to…well, I’m going to confess that I had no immediate recall of what, exactly, Ant-Man had contributed to the greater scheme of the “Avengers” saga. Instead of pretending it matters, I’ll just say that he was there, and that the Marvel Cinematic Universe is probably none too different for it.

That each of these films is somehow “relevant” to the greater MCU is a conceit that isn’t always borne out by what’s on-screen. Yet Ant-Man, by living in his own universe of wisecracking micro obsession, justifies his existence. Rudd’s performance has only gained in confidence (having a hit will do that for you). In “Ant-Man and the Wasp,” he’s direct and witty and alive, as when he surveys Lilly’s Wasp and says to Hank, “Hold on, you gave her wings?” There’s a prickly hint of ego coursing beneath the surface of Rudd’s presence. That’s what keeps him fresh.

As the Wasp, who with those fluttering wings is a partner (and possible romantic savior) to Ant-Man’s ant-riding cowboy, Evangeline Lilly seizes her moment with a refreshing air of skepticism. Her Hope doesn’t trust the whole superhero thing, and comes off a stronger heroine as a result. If there’s an actor the movie elevates, apart from her and Rudd, it’s Michael Peña, who plays Luis, Scott’s former cellmate and his colleague in the security-consultant business, with escalating stardom. The film’s comic peak kicks off with a nattering debate about what “truth serum” is, and when Luis gets an injection of it, Peña’s rapid-fire confessional monologue (with the dialogue mimed by the characters he’s talking about) has you hanging, in stitches, on every insane word.

“Ant-Man and the Wasp” is a full two hours, yet even when it’s pulling out all the stops, the movie never gives you that sinking sensation you can get when a comic-book film’s extended climax kicks in, and you feel the visual effects army taking over. That’s because Peyton Reed invests every moment of the movie with personality. That’s not quite the same thing as humanity. But it’s enough to qualify as the miniature version.

Film Review: ‘Ant-Man and the Wasp’