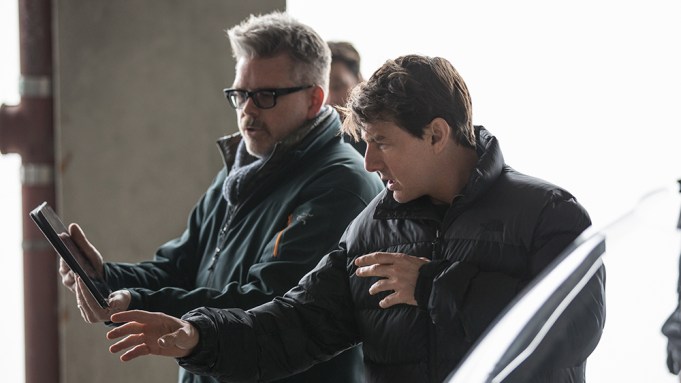 PLAYBACK is a Variety / iHeartRadio podcast bringing you conversations with the talents behind many of today’s hottest films. New episodes air every Thursday.

Director Christopher McQuarrie stops by the show today to discuss his latest high-octane thrill-ride, “Mission: Impossible – Fallout.” McQuarrie had a long road to this place, taking off quickly in the industry with an Academy Award but soon settling into a groove where he could not get the projects he wanted to direct through the system with him at the helm. Coming into superstar Tom Cruise’s orbit, first with 2008’s “Valkyrie” (which he developed) and then as director of 2012’s “Jack Reacher” (at the time, his first directorial effort in a dozen years), changed everything. His recent additions to the “Mission: Impossible” franchise have revealed a filmmaker, just four movies in, at the very top of his game.

Listen to this week’s episode of “Playback” below. New episodes air every Thursday.

“On ‘Rogue [Nation]’ what I decided to do was something of a greatest hits. I wanted to tip my hat to the four previous movies,” McQuarrie says. “Tom and I watched a lot of ‘North by Northwest’ and ‘Notorious,’ we talked about Hitchcock, and of course, De Palma is a huge disciple of Hitchcock. I am less so. The opera sequence, which a lot of people look at as an homage to ‘The Man Who Knew Too Much,’ was more inspired by ‘The Key to Reserva,’ which was sort of a send-up of Hitchcock that Martin Scorsese did. I did not think in terms of locations as much as I thought in terms of environments that invited action. My visual sense did not really kick in until midway through that movie because I was so busy working on the screenplay. I really didn’t have the confidence to push back on my cinematographer or to trust my instincts about lighting until I started editing the movie over Christmas break. I spent a lot of time analyzing what had gone right and what had gone wrong. I applied all of that to ‘Fallout.'”

A huge chunk of the conversation is dominated by a detailed dissection of the highlight stunt of this film: a HALO jump sequence achieved in five shots stitched together to look like one dazzling descent from 25,000 feet. In order to pull it off, McQuarrie’s team even had to train their camera operator to break free of his instincts (i.e., capturing freefall action in a wide frame) and to think with visual storytelling in mind, to say nothing of the focus-pulling acrobatics on display.

“Any of the stuff you see in ‘Mission: Impossible’ we could very easily do on a stage somewhere,” McQuarrie says. “It will not give you the same visceral energy that you’re experiencing when you watch your star doing it, and I’m able to shoot things in a way that I couldn’t do otherwise. There’s no doubt that there’s a large element of him having a great time doing it, but for Tom, it’s not about, ‘Hey, look at me!’ It’s about, ‘Look at Ethan!’ I shoot everything in a somewhat voyeuristic point of view, but not a voyeur peering in from the doorway. You’re right over Henry Cavill’s shoulder, over Tom’s shoulder. So Tom and I work together to create that sort of immersive experience so that you’re with Ethan and you feel what’s happening. You’re just that much more invested. That’s really what we’re after.”

Despite his recent franchise success, McQuarrie says he still struggles to realize a number of dream projects he’s developed over the last two decades. And that’s nothing new for him, either. Following the Oscar-winning success of “The Usual Suspects” in 1995, he wrote a number of scripts that he couldn’t get off the ground as director (including a draft of 2000’s “X-Men,” which was ultimately helmed by Bryan Singer). He long dreamed to bring Alexander the Great’s story to the screen as well, but the harsh realities of the business held those dreams at bay.

“No one wanted to give me the opportunity as a director on the things I wanted to direct. So that was the moment I decided to quit the film business [for a time],” McQuarrie says. “I said, ‘I’m in the business of making other people’s dreams.’ More importantly, ‘I’m in the business of trying to get movies made. I’m not making the movies I want to make.’ And this is said with all gratitude: I still haven’t. I’ve made movies that other people have wanted me to make. I’ve had the great fortune to be able to make them my way with an enormous amount of freedom. I mean, you make a movie with Tom Cruise, the only person you have to answer to is Tom. But at the same time, all of those dream projects I spent all of that time developing, I’ve never made one of them.”

For more, including thoughts on whether he has another “Mission: Impossible” film in him (and where he sees Cruise with the series in another 20 years), listen to the latest episode of “Playback” via the streaming link above.

Hear more episodes of “Playback” at iHeartRadio.
Subscribe via iTunes.