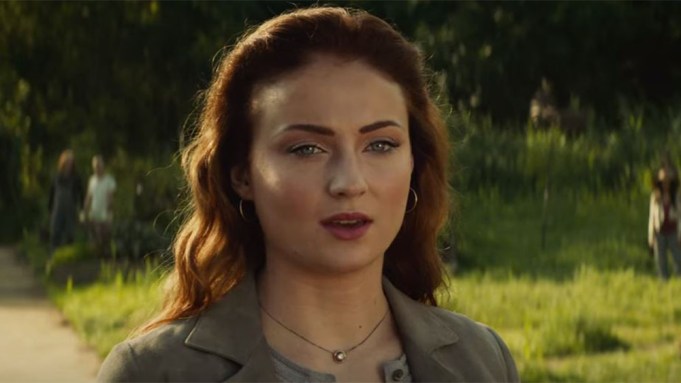 It’s Jean Grey’s turn to get her own X-Men Universe film, and the first trailer for “X-Men: Dark Phoenix” promises to deliver it, with Sophie Turner starring as the supremely powerful mutant.

The trailer shows Grey’s progression from a unwitting child who accidentally causes a car accident to a conflicted, tumultuous young woman who seeks out counsel from Michael Fassbender’s Magneto when she feels betrayed by James McAvoy’s Professor Charles Xavier.

“She’s all rage, pain, and it’s all coming out at once,” says Professor X in a voiceover.

Turner revealed the trailer on Wednesday’s “Late Late Show” alongside James Corden. The film’s release date was rescheduled from November to Feb. 2019 to accommodate reshoots for the third act.

In “Dark Phoenix,” the X-men face their most formidable and powerful foe: one of their own, Jean Grey. During a rescue mission in space, Jean is nearly killed when she is hit by a mysterious cosmic force, which makes her infinitely more powerful and unstable once she returns home. With Jean spiraling out of control, and hurting the ones she loves most, she begins to unravel the very fabric that holds the X-Men together. With the family falling apart, they must find a way to unite — not only to save Jean’s soul, but to save the planet from aliens who wish to weaponize this force and rule the galaxy.