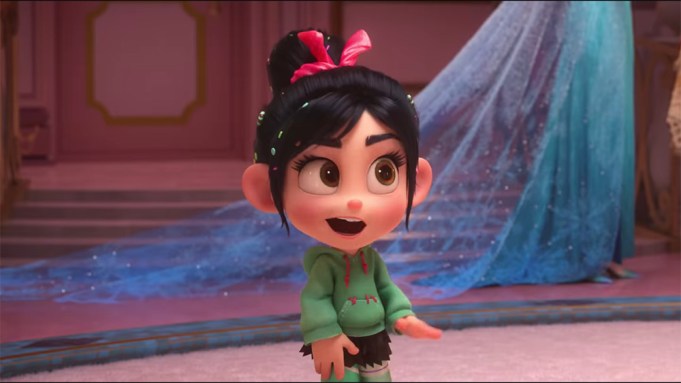 Disney has dropped a new trailer for “Ralph Breaks the Internet: Wreck-It Ralph 2″ with all the Disney Princesses making an appearance.

The trailer is highlighted by Vanellope meeting all the Disney Princesses including Auli‘i Cravalho (“Moana”), Kristen Bell (Anna in “Frozen”), Kelly Macdonald (Merida in “Brave”), Mandy Moore (Rapunzel in “Tangled”), Anika Noni Rose (Tiana in “The Princess and the Frog”), Irene Bedard (“Pocahontas”), Linda Larkin (Jasmine in “Aladdin”), Paige O’Hara (Belle in “Beauty and the Beast”) and Jodi Benson (Ariel in “The Little Mermaid”).

She’s quizzed as to whether or not she’s a princess with the key question being, “Does everyone assume that all your problems were solved by a big strong man showing up?”

“Wreck-It Ralph” grossed more than $470 million in 2012 and received an Oscar nomination. Moore directed from a screenplay by Johnston and “Frozen” co-director Jennifer Lee based on a story by Moore, Johnston and Jim Reardon. That movie took place in the game “Fix-It Felix, Jr.” The villain, Wreck-It Ralph, embarks on a journey to break his bad guy rep.