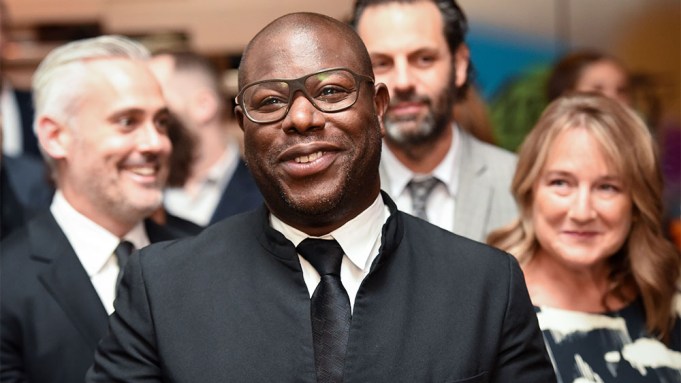 It’s been two years since #OscarsSoWhite shook up Hollywood with the call for greater diversity in Hollywood, particularly at the Academy Awards.

“We are seeing an improvement,” Steve McQueen said at the Variety and AT&T Toronto International Film Festival party for his new action-thriller “Widows.” “We haven’t gone far enough, but hey, I hope we stick to the cause and get things done.”

McQueen was joined at the party, held at Momofuku, by his cast including Viola Davis (who appears on the current cover of Variety), Cynthia Erivo, Liam Neeson, Brian Tyree Henry, Elizabeth Debicki, Daniel Kaluuya, Robert Duvall and Michelle Rodriguez as well as co-screenwriter Gillian Flynn.

Variety co-editor-in-chief Claudia Eller praised Davis, who appears on the current cover of the magazine. “I think everyone in this room would agree that your talent is unsurpassed,” Eller said. “You’re a triple-threat. You’ve won Oscars, you’ve won Emmys, you’ve won Tonys. Everything you touch turns to gold. You’re an extraordinary talent.”

In fact, Davis is just one Grammy Award from an EGOT, but she noted it will be difficult “because you know I don’t sing.” Her husband, Julius Tennon, quickly suggested she could read “Peter and the Wolf” and win for spoken word album.

With so many memorable characters to her resume, Davis says it’s her character on “How To Get Away with Murder” that people most want to talk about. “Analise Keating,” she said. “And I think it’s because TV, I think it’s because it’s reached such a wide audience. I think because she’s so complicated and so flawed but at the same time I think she is very sympathetic and empathetic.”

Davis added, “After that, it’s ‘The Help.’ People love Aibileen.”

Erivo is also one award away from an EGOT, having won an Emmy, Tony and Grammy Award but surprisingly, “Widows” is her film debut. “This was the first movie I did,” she revealed. “And now, including the one I’m about to start shooting, I will be in five movies.”

Audiences won’t hear her singing voice in “Widows,” and that’s okay by Erivo. “I think that Steve wanted me to just do the thing I haven’t done yet, which was just straight-up act. Which I really actually appreciate. Because you’ll hear me singing a lot in other movies and other things. I think this is an opportunity to just show some acting chops, really.”

Duvall also had nothing but praise for McQueen, stating, “I don’t get along with directors. I loved working with this guy. One of my favorites of all time.” Duvall has directed films himself, including 1997’s “The Apostle,” but says he no longer wants to direct. “I’ve had it up to here. It’s hard to find a good project, hard to find money.”

Also hard to find are quality roles for women, and the stars of “Widows” recognized how unique it was to have a movie telling the stories of four powerful women. Though it’s been less than a year since the #TimesUp Movement took hold, Debicki says she’s hopeful for future scripts.

“I think that there have been massive improvements – much more to come – but I feel a shift, for certain,” she noted. “I think the thing that feels like it’s really opened up is the space for women to really speak about it to begin with  in a really transparent way and sort of jump faster to being able to ask what they want from the industry and not being at all shy about it.”