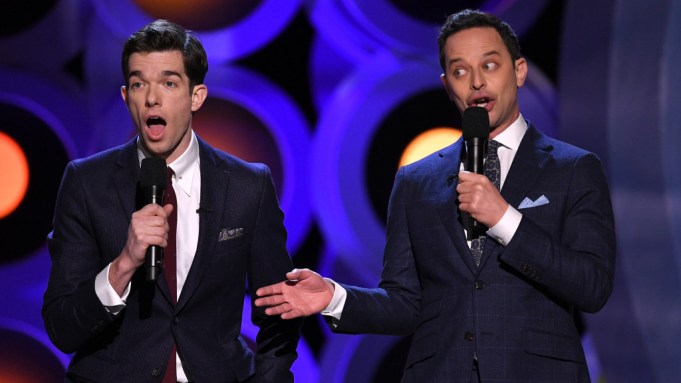 Independent Spirit Awards hosts John Mulaney and Nick Kroll killed the room during their opening monologue at the awards show the day before the Academy Awards, bringing down the house with a series of take-no-prisoners jokes skewering Hollywood and its place in the #MeToo movement.

“What a year! Last year every one famous died, this year everyone famous wishes they were dead,” Mulaney said.

“Let’s name some names!” he continued. And that’s exactly what they did — starting with Harvey Weinstein.

“This is a true story, I met Harvey Weinstein once, this was in 2015 for a meeting,” Mulaney began. “And he was complaining to me in the meeting that Weinstein TV took up too much of his time. He said, and I quote, ‘Yeah, no one’s going to remember my movies. Forget ‘Pulp Fiction’ — my tombstone is gonna say ‘Project Runway.”’

Kroll also told a story about seeing Brett Ratner on set scratching himself and then touching the craft services donuts.

The duo continued on asking the big questions, for example, can you separate the art from the man? “With Kevin Spacey, can we still love ‘K-Pax’?” Kroll asked.

“What about Woody Allen and his last 20 unwatchable movies?” Mulaney continued. “Can I still not watch them or must I reevaluate based on these new allegations that were a matter of public record 30 years ago?”

They then moved on to analyzing what the hosts described as a “Renaissance for men making apologies,” breaking it down letter by letter.

“Louis C.K. said in his that the women admired him three times. Woah. That’s like if a guy s—t his pants and to fix the problem he put on cufflinks,” quipped Mulaney.

“Then there was Kevin Spacey: ‘I don’t remember doing this but I know I was drunk when I did it.’ Also, in a Keyser Söze-like twist, ‘I’m coming out of the closet.’ So to sum it up, I’m connecting being gay with assaulting a minor. And now to let the congratulation notes roll in,” Kroll said.

Other highlights included a joke about “Three Billboards” winner Frances McDormand: “I bet a fun way to commit suicide would be to cut in front of her in line and then go, ‘Hey lady, relax.'”