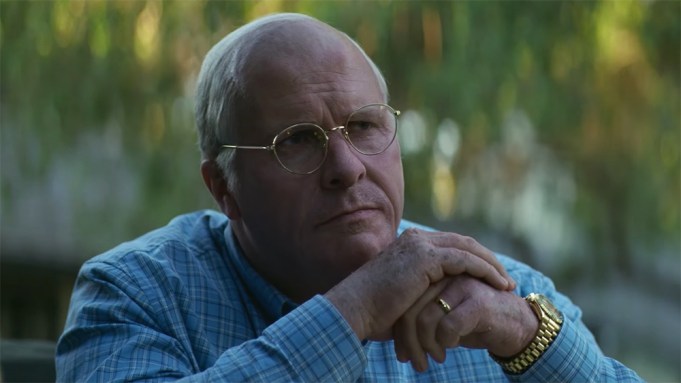 “I’m a CEO of a large company, and I have been secretary of defense, and I have been White House chief of staff. The vice presidency is a mostly symbolic job,” Bale’s Cheney says when George W. Bush (Sam Rockwell) asks him to be his right-hand man. “However, if we came to a different understanding…”

By the end of the clip, Cheney concedes. “I believe we can make this work.”

The biopic, directed by “The Big Short’s” Adam McKay, chronicles Cheney’s life as the former vice president under President George W. Bush. Starting with his beginnings as a Washington bureaucrat, the film explores Cheney’s service under the Richard Nixon, Gerald Ford, and George H. W. Bush administrations and as the CEO of energy management company Halliburton.

To play Cheney, Bale had to shave his head, bleach his eyebrows, and put on 40 pounds — but that’s nothing new for the Oscar winner, who is known for undergoing intense transformations. He lost 60 pounds for 2004’s “The Machinist,” only to gain it back in muscle to play Batman in 2005’s “Batman Begins.”

Will Ferrell and Kevin Messick from McKay’s Gary Sanchez Productions serve as the show’s producers, along with Brad Pitt, Dede Gardner, and Jeremy Kleiner from Pitt’s Plan B.