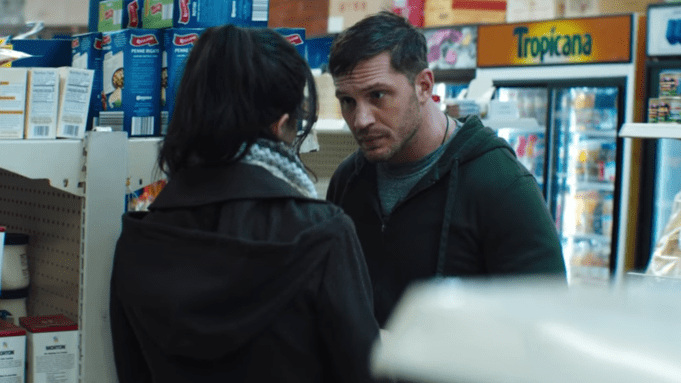 The film, which doesn’t resemble a superhero tentpole, began with Hardy’s Eddie Brock as a tough journalist dealing with Michelle Williams and Riz Ahmed as he uncovers nefarious exploitation at a corporate entity — resulting in a subsequent visit at his run-down apartment from henchmen who are there to dispatch him.

At that point, Hardy transforms into Venom — a much-larger gooey alien symbiote with massive powers who quickly kills his attackers. Other footage showed a puzzled Eddie Brock wondering what has happened, then transforming back into the new character. “We are Venom” he proclaimed at the end of the footage.

The footage received by far the most positive response from Exhibitors at Caesars Palace in Las Vegas for the opening night of the CinemaCon convention. Hardy said he’s particularly excited that his son will be able to see “Venom.”

“Being part of this movie is a dream come true,” Hardy said. “He’s one of my favorite characters as well.”

Director Ruben Fleischer was also on hand for the presentation, as were Williams and Ahmed — both noting that it was the first time that they’ve appeared in a superhero movie. Woody Harrelson, Jenny Slate, and Reid Scott also star.

Scott Rosenberg (“Jumanji”) and Jeff Pinkner (“The Dark Tower”), and Kelly Marcel wrote the script. Avi Arad and Matt Tolmach are producing the movie, along with Amy Pascal.

Venom was created in 1988 by Marvel Comics. The character made his big-screen debut more than a decade ago in Sam Raimi’s “Spider-Man 3,” where he was portrayed by Topher Grace. The movie is intended to be the first film in Sony’s Marvel Universe.