‘Venom’: Tom Hardy Wrestles With His Demons in First Teaser 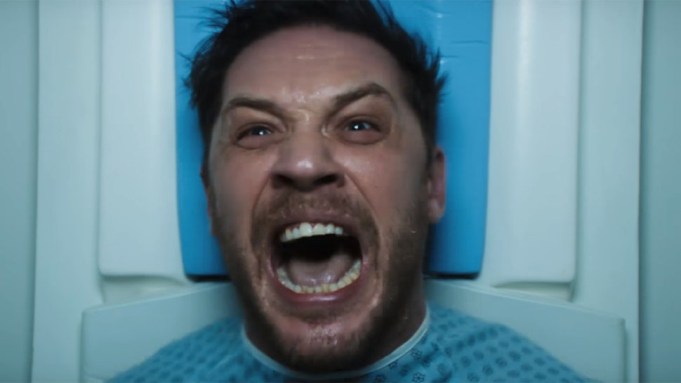 Tom Hardy’s Venom wrestles with his demons in the first teaser for the titular antihero’s film.

Sony released the official teaser trailer on Thursday, a day after debuting the poster.

Hardy’s character awakens in an MRI machine in the hospital after what appears to be an accident — shown in bits and pieces in flashbacks.

“Everyone’s got their thing. Maybe it’s a breakup, a death, an accident. Whatever it is, you used to be one thing. Now,  you’re something else,” he says in the voiceover. “We all have our own problems. Our own issues. Our own … demons.”

The teaser for the film, which doesn’t resemble a superhero tentpole, ends with Hardy’s Eddie Brock screaming at the top of his lungs as his body shakes in the machine. Brock doesn’t appear as his alter ego Venom in the footage.

Scott Rosenberg (“Jumanji”) and Jeff Pinkner (“The Dark Tower”), and Kelly Marcel wrote the script. Avi Arad and Matt Tolmach are producing the movie, along with Amy Pascal.

Created in 1988 by Marvel Comics, Venom is an alien symbiote that uses human hosts to survive. The character made his big-screen debut in Sam Raimi’s “Spider-Man 3,” where he was portrayed by Topher Grace.