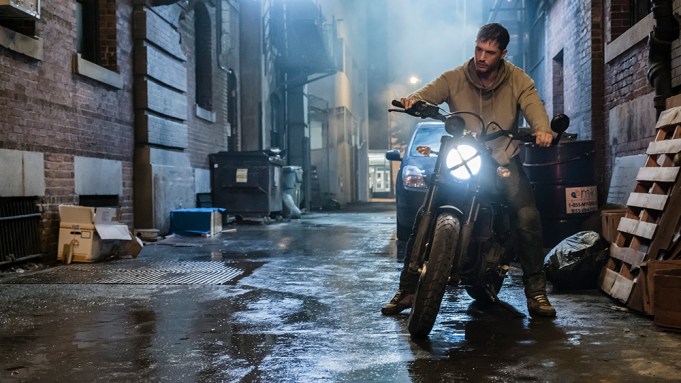 “Venom” remains a force to be reckoned with overseas as the Tom Hardy superhero movie topped the foreign box office for the third weekend in a row.

Meanwhile, Warner Bros.’ “A Star Is Born” continues to do monster business of its own. The acclaimed musical drama starring Bradley Cooper and Lady Gaga generated an impressive $22.8 million from 75 overseas markets, bringing its tally to $74.7 million overseas and $201 million globally. “A Star Is Born” opened in Australia with $4.7 million in 536 venues, as well as Hong Kong with $629,000 in 58 locations. Top holdovers include the United Kingdom ($3.9 million on 846 screens), Italy ($1.5 million on 614 screens), and France ($1.5 million on 353 screens). It debuts next in Japan on Dec. 21.

Though Universal’s “Halloween” topped the domestic box office, the R-rated slasher landed in third place overseas. David Gordon Green’s take, a direct sequel to John Carpenter’s 1978 classic, picked up $14.3 million when it launched in 23 international territories, along with $77.5 million in North American for a global start of $91.8 million. Jamie Lee Curtis reprises her role as avenging babysitter Laurie Strode, who is now a grandmother. “Halloween” saw the biggest opening in Mexico, where it made $4.9 million from 845 locations. In the U.K. and Ireland, the thriller pocketed $3.6 million from 530 locations, while it collected $1.7 million in Russia.

Warner Bros.’ “Smallfoot” scored $14 million in 71 territories this weekend, which brings its overseas total to $70.8 million. In North America, the animated family film has amassed $66 million. At the foreign box office, “Smallfoot” had the best launches in China ($3.9 million) and France ($1.85 million).

While Universal’s “First Man,” starring Ryan Gosling as astronaut Neil Armstrong and directed by Damien Chazelle, has struggled to find its footing in North America, the space epic generated another $13.4 million from 47 international markets. “First Man” has earned $55 million globally, including $25.5 million overseas. It opened this weekend in Korea with $3.5 million, followed by Brazil with $700,000 and the United Arab Emirates with $500,000.