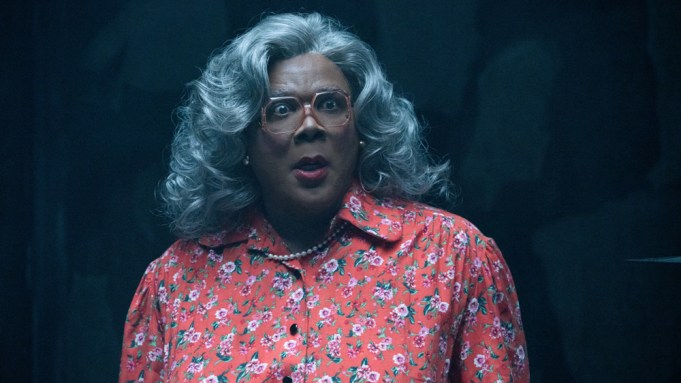 Since debuting in 1999, Tyler Perry’s Madea character has appeared in dozens of films, plays, and television appearances. But in 2019, exactly 20 years after audiences first met the tough-talking grandmother, Perry is taking off the makeup and wig once and for all.

The filmmaker will do a farewell stage tour and 2019’s “Tyler Perry’s a Madea Family Funeral” to say goodbye to his iconic character.

“I’m happy to kill that old bitch, I’m tired, man,” Perry said on Bevy Smith’s SiriusXM show “Bevelations” on Monday. “I just don’t want to be her age, playing her.”

He also said on the program that his team finished shooting the film two years ago, but wanted to stagger its release following 2016 and 2017’s Madea Halloween films. Perry also wanted to focus on other projects like “Acrimony,” released earlier this year, and “Nobody’s Fool,” which will be out Nov. 2. Both movies were written and directed by Perry.

Spanning 10 installments, the Madea film franchise has garnered more than $500 million worldwide. Madea was first introduced in Perry’s 1999 play “I Can Do Bad All By Myself.” He has said she was based on his own mother, as well as Eddie Murphy’s performance in “Nutty Professor II: The Klumps.” The character is known to use comical and vulgar language, and has a litany of criminal offenses, which was especially highlighted in 2009’s “Madea Goes to Jail.”

Perry didn’t reveal if the funeral in the upcoming film would be for Madea herself, and the movie poster shows the character with her head down wearing mourning attire. The film will also mark the last collaboration between Perry and Lionsgate. Perry has signed a deal with Viacom that will see him producing content across television, film, and short-form video platforms.