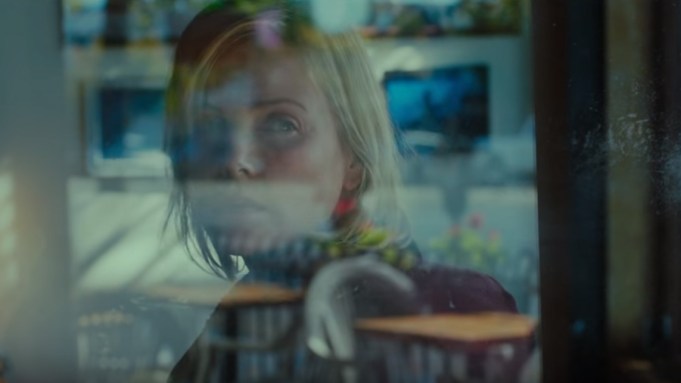 Motherhood is tough — that much is clear from the new trailer for “Tully,” from director Jason Reitman and “Juno” screenwriter Diablo Cody.

Charlize Theron stars as Marlo, an overwhelmed expectant mother of soon-to-be three, who is gifted with a night nurse by her brother (Mark Duplass). Wary at first, Marlo comes to form a unique bond with Tully (Mackenzie Davis).

The trailer begins with shots of Marlo asleep on a couch as her children play around her, and continues into a montage of small frustrations, like the bag containing her pumped breast milk falling over in the middle of the night, and Marlo dropping her phone on her infant’s face.

“Mom, what’s wrong with your body?” her son asks after Marlo, pregnant, takes off her shirt when he spills a drink on it during dinner.

“Your 20s are great,” Marlo says in a voice-over later on, “but then your 30s come around the corner like a garbage truck at 5 a.m.”

“I’m here to help you with everything,” Tully explains. “You can’t fix the parts without treating the whole.”

Focus Features acquired the distribution rights in May 2017, and the film premiered at the 2018 Sundance Film Festival. It marks Reitman and Cody’s third collaboration, after “Juno” and “Young Adult,” which also starred Theron. Variety‘s Owen Gleiberman called Theron’s performance in “Tully” “fearless, emotionally raw, and physically intense, rippled with embattled waves of exhaustion and anger” in his review.